These Are a Few of My Favorite Tweets…

…from during the broadcast of THE SOUND OF MUSIC LIVE! on NBC.

Dad duties dictated I pass on an opportunity to usher (dressed as a nun, no less) at a local theater where it was being shown. From all accounts it sounded like a great time, including some impromptu sing-a-longs during sound problems. Events like this are always way more hilarious — or awful — when experienced en masse.

So I had to watch it alone at home… And yet, the world watched with me, and laid in to Carrie and company with much gusto and snark. Yes, there were plenty of positive comments about Audra McDonald, Laura Benati, the children, the ratings. But that’s not why God invented Twitter.

While most of the more scathing comments were directed at the lead’s wooden underacting, things snowballed from there as the Twitterverse barreled down the Austrian mountainside, picking up Vampire Bill, Julie Andrews, yodeling and Grumpy Cat along the way.

Without further ado, I present A Few of My Favorite Tweets…
(and yeah, the first one’s from me, after a mere one line of dialog from Maria)

How long till “I was on my knees most of the night” starts trending? #SoundofMusic

In positive news, SNL this week will be a must watch! #SoundofMusic 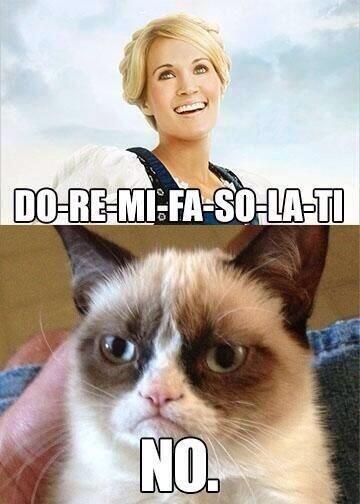 The fashion label Kurt grows up to start definitely has a line called Kurtains. #SoundofMusic

Von Trapp is all “Imma let you finish” #SOML #theSoundofMusicLive

Nazis are terrible at hide and seek #SOML

This “What’s The Big Deal About Nazis?” song is my jam. (May not be actual title) #SoundofMusic

.
So what were a few of your favorites? Leave ’em in the comments!

For more fun and frivolity, please visit the Designer Daddy Facebook page  to make it one of your favorite things!

6 responses to “These Are a Few of My Favorite Tweets…”