Chasing After Batman: An Introverted Parent Raising An Extroverted Child 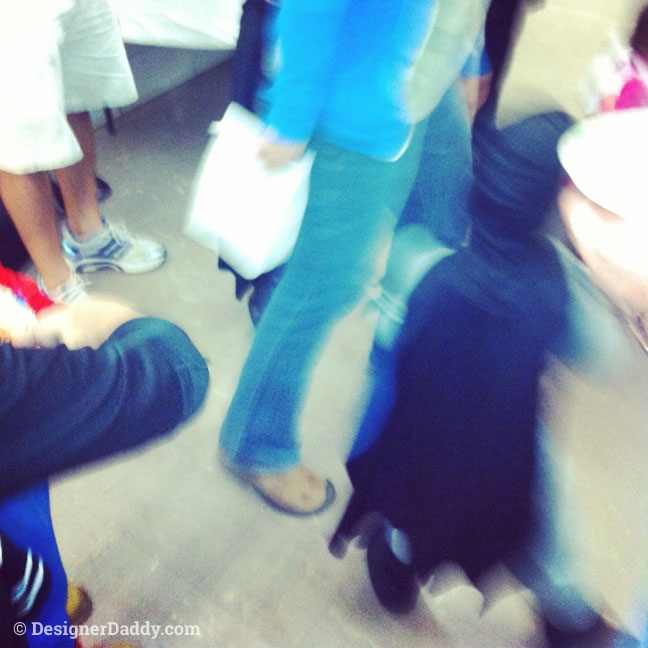 Recently I found myself, yet again, frantically trailing after my son as he ran on ahead of me, weaving in and out and through the crowd like a pint-sized quarterback. This time we were at his preschool, attending a Halloween-themed fair, where each classroom offered a different adventure in which JJ would embark and then move on to the next as quick as he’d gotten the requisite prize. His little black cape swooped around with an extra amount of drama — the Velcro closure was itchy around his neck, so he wore his cowl unfastened and scooted up on top of his head so he could plow ahead, unencumbered.

He — being 4 years old and nimble, and me— about a parent-and-a-half in size, made this chase an exercise in futility. So I followed close enough to appear somewhat in control to concerned onlookers, and where he could hear my voice without me having to shout. But I allowed a bit of distance because otherwise we’d be butting heads all night, or I’d be plowing half the hallway down. Or both.

I perpetually cringed as he barely missed bumping into a child in a wheelchair or tripping the teacher carrying a large box of cupcakes, bobbing and weaving with such disregard and joyous abandon. The only way I was able to keep up at all was because every few seconds he would stop, plant himself in front of someone and declare,“I’m Batman!” Then off he dashed to vanquish the next foe and add another trinket or treat to his plastic pumpkin.

And I found myself, yet again, thinking “Is this normal? Is he okay? Am I being too uptight? Am I doing this right? Will he ever slow down?”

You see, I’m an introvert raising an extroverted child, and I’m way out of my depth.

I realize I may not appear introverted to some. I definitely have my moments in the spotlight, but they usually include a script or a score (and an actual spotlight), or a couple of rum and cokes. It doesn’t come naturally to me like it does to my son.

And yes, I realize he’s a four year old. And that four year olds are out of control sometimes. And that boys will be boys. But from where I stood jogged, he was the only one running the halls for as long and as fast as he was. And while there were several other Batmen and Batgirls, he was the only one declaring his Batman-ness with such ferocity and frequency. He’s also the one in his class whose cot is next to the teacher’s desk so he doesn’t wake the other kids at naptime. When he was in daycare, he called all the shots — who decided who would be which superhero and which bad guy and how it would all play out. And he was the one who they all gathered around in anticipation when he returned from vacation. He was the one a couple of daycare siblings took turns pretending to be when they played at home.

As I’ve done pretty much since our boy started to move — I compare how different a child he is to what I was at his age. Or any age. I was never the leader, the self-proclaimer, the Force to Be Reckoned With. I was the peacemaker, the best friend, the teacher’s pet. JJ isn’t the teacher’s pet in the traditional sense, but he’s known and loved throughout his school, by kids and teachers alike. Even on regular days when he’s not racing around in costume, everyone says hello and goodbye and talks about how cute he is in his raincoat or covered in Ninja Turtle Band-Aids. He’s just so ON…all the time.

As far as I can tell, JJ’s the most gregarious and extroverted child there. And by “there” I mean anywhere. He’s on this adventure and I’m along for the ride, making sure he doesn’t run too far ahead, knock anyone over, or cross the street without holding my hand.

Papa and I admitted to one another recently that we have “toddler envy” for one of JJ’s classmates. He’s nearly a year younger, sweet as the dickens, and is shy, though not painfully so. He’s a nice, quiet little guy… who of course thinks JJ hung the moon. As does his Mom. She likes having her son hang out with ours, in hopes that JJ will pull him out of his shell a bit. We long for the opposite to happen and that our hurried hare tries on the turtle outfit from time-to-time.

Admittedly, part of my introverted nature is me worrying too much what other people think. While it still hangs on, I’ve definitely shed some of that baggage, mostly out of necessity. Whether pulling out all my funny voices and song repertoire on a long plane ride, swerving through the supermarket to keep things out of reach, or dragging JJ screaming off the playground, I’ve learned to get through it with my kid safely and (somewhat) soundly, prying or judging eyes be damned.

Yet I want to make sure he’s kind to his shy, admiring classmate and generous to the ones that pretend to be him. I don’t want him to take his confidence and popularity for granted or use it to take advantage of others.

I don’t have any advice on how to make it easier for myself or for anyone else in my situation. But writing about it here helps me to think through it, to not get overwhelmed. I’m trying to strike a balance between teaching him limits and allowing him to go all out. To keep him safe while letting him take risks. To be considerate of others while being 100% himself. I want to take this unique opportunity and to grow from it, allow it to pull me out of my own comfort zone, and to stop relying so much on others’ opinions.

I’ve spent a lot of years (and money) pulling myself out of said comfort zone. In my son is the best opportunity yet to help push my limits, teach me fearlessness and to put myself out there; to live life as big and as loud and as fast as I can.

In the midst of all my unsettledness, I want to be clear that my son’s confidence and exuberance gives me great joy. I admire his being so out there, running bold and declaring to the world who he is and what nemesis or challenge he’s taking on next. But Batman or no, he still has to hold my hand when he crosses the street. We both need it, just a little while longer.

P.S. If you’re not already a fan of the Designer Daddy’s Facebook Page, but you like the blog, please hop on over for a visit! In addition to posting things from here, I mix in lots of extra photos, take reader questions, and other assorted sweet & silly stuff. I have a couple of new things I’ll be rolling out soon, so stay tuned!

53 responses to “Chasing After Batman: An Introverted Parent Raising An Extroverted Child”