Lately I’ve been lacking the time and energy to be an effective dad or a productive designer, much less a Designer Daddy of any measure. And I’ve got no one to blame but myself. But a recent trip to Atlanta brought about some much needed refocusing.

A couple of weeks ago I attended SalonLGBTQ, the first social media conference of its kind – for and about the LGBTQ community. My work schedule had slowly been reaching capacity, and culminated with several projects being due in conjunction with the conference. Amongst the professional stress was the ongoing struggle with our feisty almost-four year-old and his increasing use of falling on the floor and cry-whining as a means of communication. Add to that the pressures of preparing for this trip —where I’d also be making my debut as an “expert” blogger as part of a panel discussing parent blogging, social media and all things homosexual.

Despite all that, I managed to make it to the conference in one piece, though soaked to the bone from my walk across the street 2.5 blocks in the rain from the subway to the hotel. After cramming in some work and drying my socks, I went downstairs and enjoyed the hell out of the opening reception. It was Spirit Day, so everyone was wearing purple…except me. You know, the graphic designer who’s super keen on color and stuff. But it was a thrill meeting all manner of wonderful folk, including my longtime internet hero, Sarah/Nerdy Apple, and my new-found hero, Amelia. These two awesome moms have sons who don’t fit the normal norms, and they spend their time celebrating and championing them every chance they get. Plus these ladies both like to party. We were fast friends. 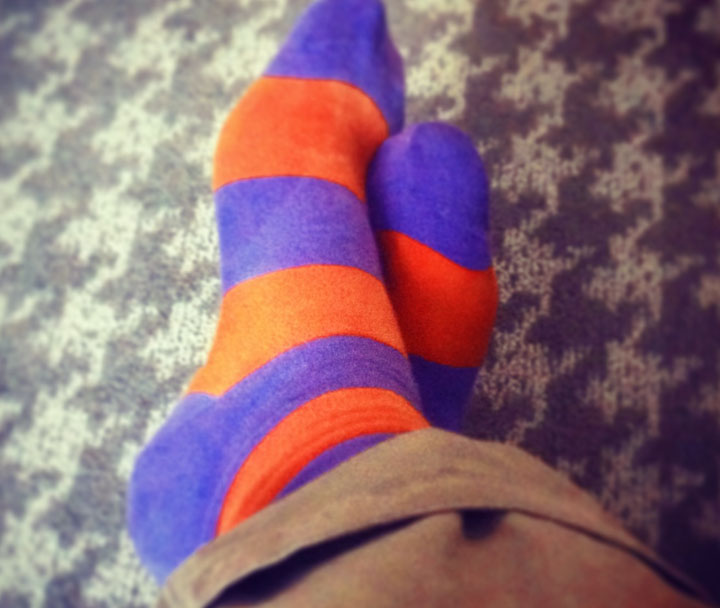 Here’s my #SpiritDay purple, drying out from my trek through the rain. 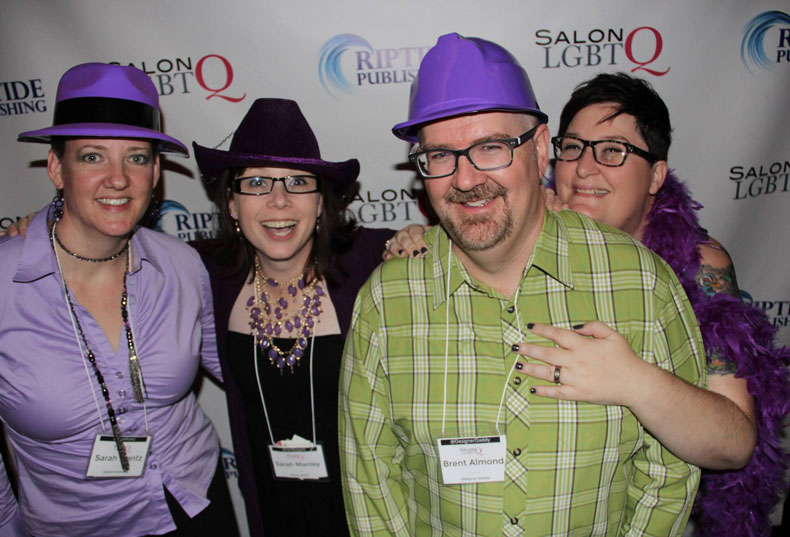 Later I joined two of my fellow panelists for dinner (and more drinks) as we shared our journeys to becoming parents and writers. Polly (who was leading our group) is truly one of the kindest and most generous people I’ve ever met. She has the uncanny ability to be your cheerleader AND make you feel grounded. And Sandra is a passionate mama (she brought her whole brood with her, so BABIES!) who was inspiring and just great fun to be around.

The next morning was our panel, “Rewriting Family: LGBTQ Parent Blogging.” We spoke and interacted with our room of a attendees on pretty much anything and everything related to parenting, blogging and being queer: from how we fit in as bloggers and parents to having “the talk” with our kids that don’t share our orientation. 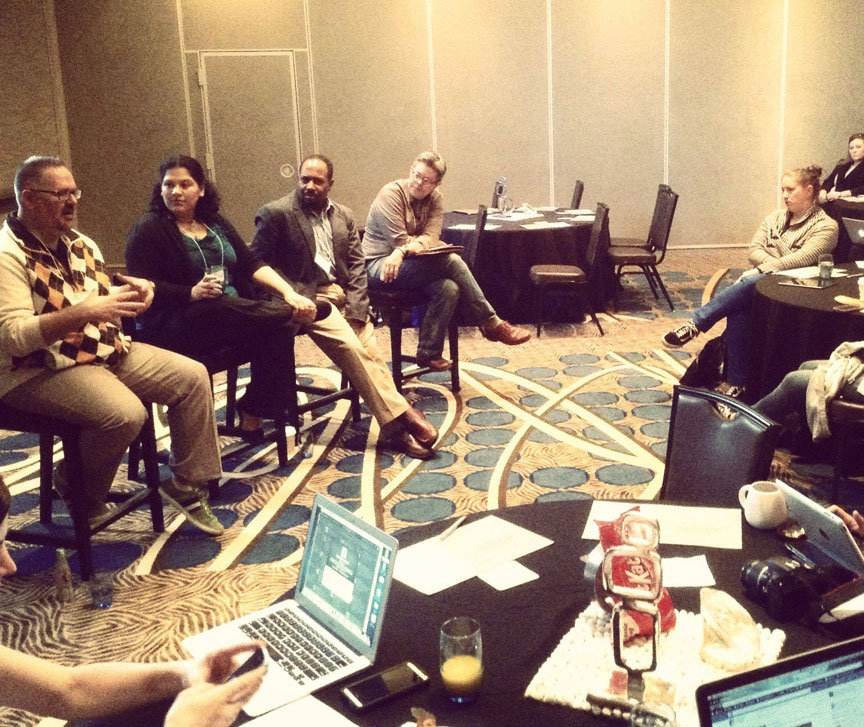 I honestly don’t remember much of what I said (due to lack of sleep and much of nerves), but there was constant engagement with everyone in the room — a good sign for this kind of format. I was stoked to be quoted in a couple of Tweets I read later, but embarrassed that my toddler fatigue was coming through loud-and-clear:

“It’s a sign of equality to be a gay parent and be able to complain online about my kids.”

“I feel like I need to be more perfect around other gay families, like we have a standard to uphold.”
(This is from a story I’ve yet to write about. But based on the reaction I got, stay tuned…) 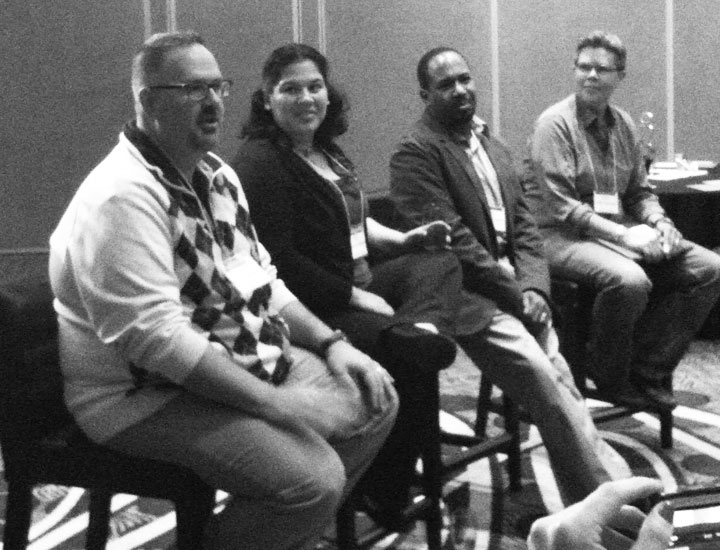 It’s black & white, so I was probably saying something serious.

Several times during the weekend I spoke about how much I’d benefited from reconnecting with the straight community since becoming a parent and a blogger. We gays tend to circle up with our own after coming out, as we build support, explore our identity and find love. But when kids come into the picture, it gives us a way to relate back to the larger population, sometimes even more so than to our LGBT family.

Yet as I recounted all the great interaction I’ve had, both online and in real life with the hetero crowd, I found myself also reconnecting with my LGBTQ community.

But wait — aren’t you gay yourself? And married to another dude? And in the Gay Men’s Chorus of Washington DC and march in Pride parades and sing on the steps of the Supreme Court and get interviewed about being a gay dad? Aren’t you kind of all up in the community ALL THE TIME?

Well, yes. But those experiences are by and large with other gay men. SalonLGBTQ was me getting in touch with the feminine side of our larger community. Or more accurately, the L, the B, the T and the Q.

The women I’ve mentioned and many others formed the crux of the connections I made. In many cases it was the shared experience of being parents. In one instance it was about being a designer. Other conversations revolved around books and music. There was even an Arkansas bond. I took every opportunity to soak in and learn, not just promote and plug. 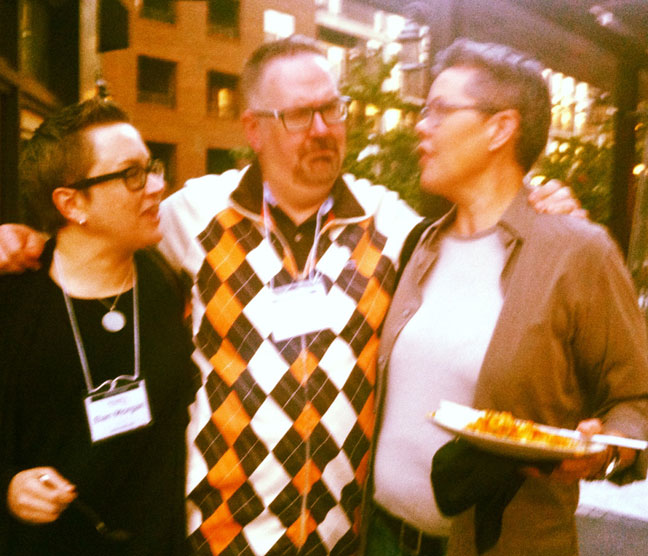 A Schmutzie, a Designer Daddy and a Lesbian Dad walk into a bar… 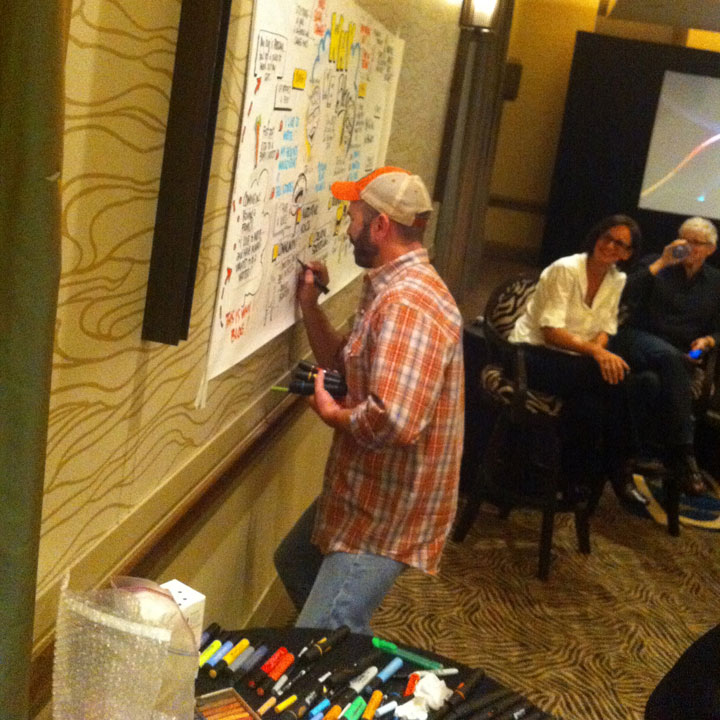 There were some incredible men there, too! Anthony Weeks wowed us by drawing an infographic while the ladies from peachesandcoconuts.com spoke.

I’ll spare you details of how much I had to work and how little sleep I got. I spent much (too much) of my time after my panel trying to keep from losing clients while also ensuring what I’d invested in this conference wasn’t a waste. Through this struggle, a second personal theme emerged, beyond that of connectedness. Simplify.

Beyond its work applications, the message of simplification speaks to every aspect of my life. I want to explore where can I scale back to ensure I’m doing the job of a father worthy of writing about. Even since the conference, opportunities have come up that I’ve had to turn down. While flattering, to say yes to it all would dilute who I am (and who I long to be) as a writer, a designer, a father and a gay man.

Wow, that got unexpectedly heavy and self-important.

So let me simplify and sum this the hell up: community, connection, simplicity, gratitude.

Speaking of gratitude: A huge THANK YOU to Deb Rox for including me in this inaugural Salon. I know I’m supposed to be all cool and blasé about being a speaker or (HA!) authority of any sort, but I like to wear my stuff on my sleeve… OMG it was SUPERCRAZYAWESOMESAUCE! Attending and speaking at SalonLGBTQ was a significant, meaningful validation to my endeavors as both a parent and a blogger, and I don’t care who knows it! 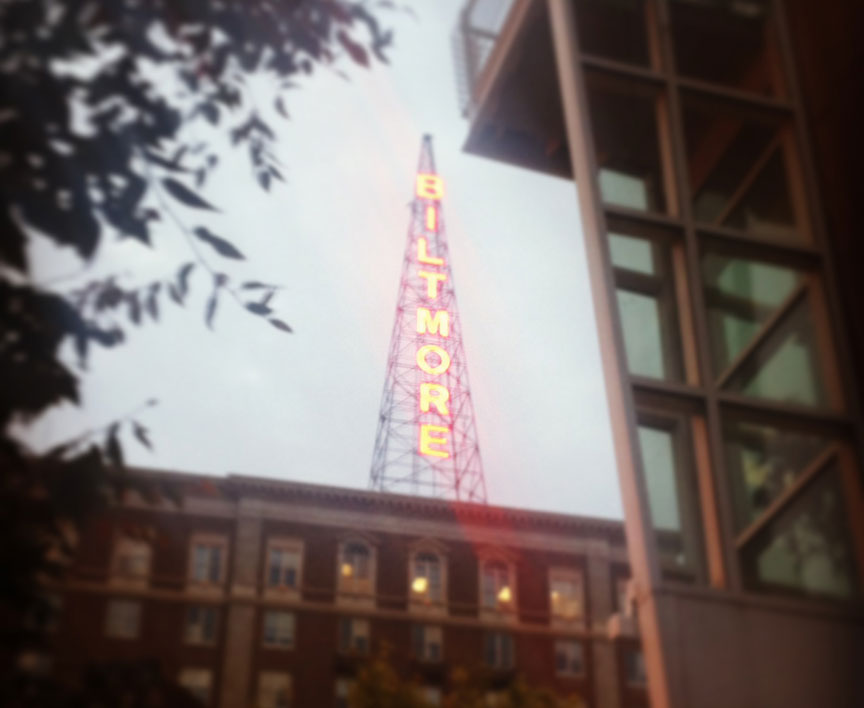 This was the extent of my sight-seeing, which — of course — was on the way to Starbucks.

Please click the links throughout the article to read and follow all these great folks!
And for more photos from the event, visit SalonLGBTQ’s Facebook page.