The last time I was at Kings Dominion was about a dozen years ago. I recall the faded Hanna-Barbera characters on the parking lot signs, a Nickelodeon play area for the kiddies, and a whole section devoted to the “Wayne’s World” movies. Having not been a parent then (and never a “Wayne’s World” fan) I assumed that was my final visit.

But then I got an offer for the whole family to check out King’s Dominion’s Planet Spooky Halloween shindig, and decided it was time to give it another try.

We met up with blogger pal Oren and his family and jumped right in to experience as much Planet Spooky as we could cram into a day.

SPOILER ALERT: Planet Spooky is really Planet Snoopy tarted up with all manner of Halloween goodies. In addition to the 18 rides normally found in the “world’s largest Planet Snoopy play area,” (There’s more than one? Who knew?) it features a pumpkin painting patch, petting zoo, foam pit, pedal tractors, a hay maze, live shows and more. We either participated in or passed by every one of those  except the “and more”… Unless the “and more” was winning a stuffed Rasta monkey while playing whack-a-mole. In which case we did do it all.

Here are the highlights, in pictures (and a few more words). 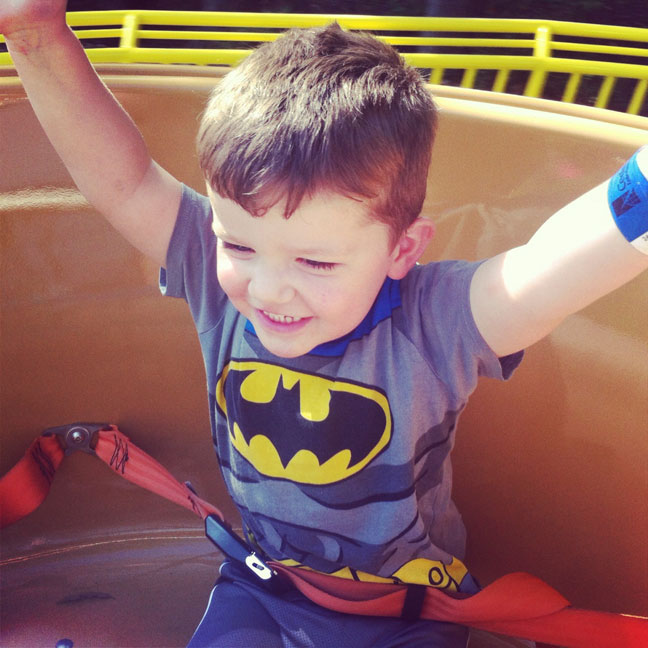 Papa was recovering from a “business dinner” the night before, so I got to ride the super-spinny Woodstock ride (above) with JJ, which you can tell he loved the heck out of. Bonus points to King’s Dominion for rides that fit both a 4 year-old and his oversized Dad.

We made our way around to other attractions: the Great Pumpkin coaster, the hay maze, the moon bounce. We picked up candy and prizes at Trick-or-Treat stations scattered throughout the park. This was a fun Halloween bonus for them, but I think the kids would have loved it just as much without. 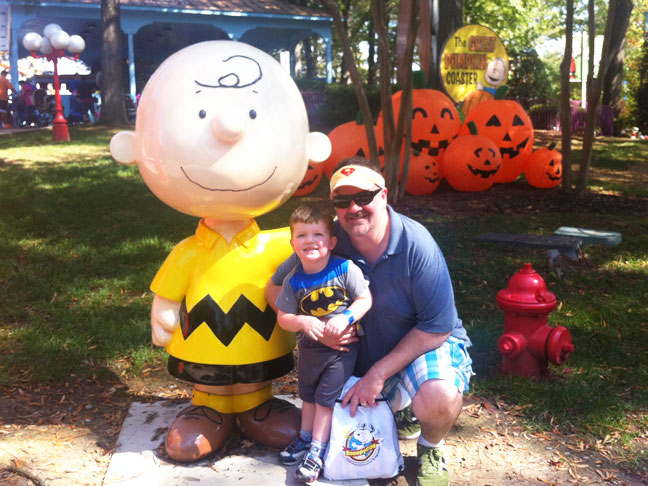 Posing with Daddy & Charlie B. 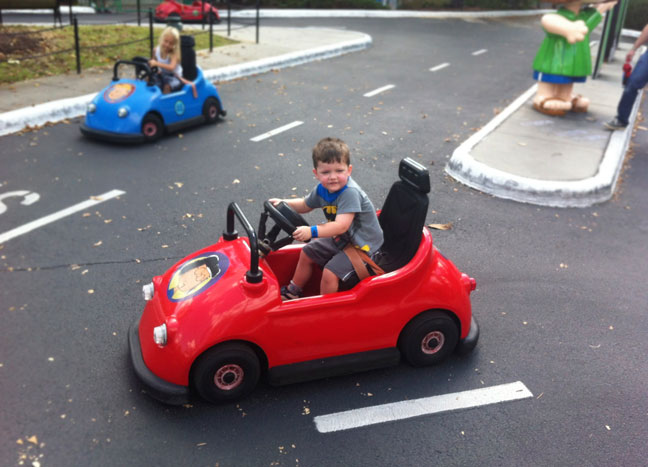 At least he wasn’t texting…

JJ had a blast scooting around in his mini “Daddy car,” at Joe Cool’s Driving School, until he ran into the curb and bonked his lip on his steering wheel. He was brave as he exited the track, but lost his Joe Cool when he saw us. He indeed had a busted lip, so we quickly headed to the nearby First Aid station, where we were seen by very helpful and friendly EMTs. They gave JJ a little water/peroxide mouthwash and an icepack and we were on our way.

While I realize accidents happen, and JJ wasn’t seriously hurt, I have to say the setup for this ride was confusing. Joe Cool’s Driving School is right next to the pedal tractor track, but as we approached we saw only one line. We waited in line for a while, but when we got to the entrance, Oren’s daughter was turned away for being too short, and was told riding the tractors required exiting back through the line and all the way around both tracks…even though you enter both from the holding area we were in. The reason given for that? There was only one person working both entrances/lines. I would have been happy having JJ ride the non-mechanized tractors (and possibly avoiding his accident) and I’m sure Oren’s wife and daughter would have preferred not having to squeeze their way back through the long line of people to exit the ride area.

We were just glad JJ was okay, but it did seem these two rides were understaffed and confusing, not to mention a bit unsafe for someone JJ’s age, if not his height. Some better signage and an extra worker could go a long way towards lessening the confusion.

After resting up and refueling on pizza and yogurt, we headed to the other Halloween feature in the park: Trick-or-Treat with the Dinosaurs! A 6-acre animatronic dinosaur park, Dinosaurs Alive has dozens of life-sized dinos that roar, screech and move their heads and tails, which thrilled JJ and the other kids to no end. The first sign the park had been Halloweenized was a Redskinette Raptor sporting some prehistoric pom-poms. About a quarter of the dinosaurs were dressed up for trick-or-treating, from clowns to ninjas to cows. It was actually pretty hilarious, and something fun for all of us to look forward to around every corner. 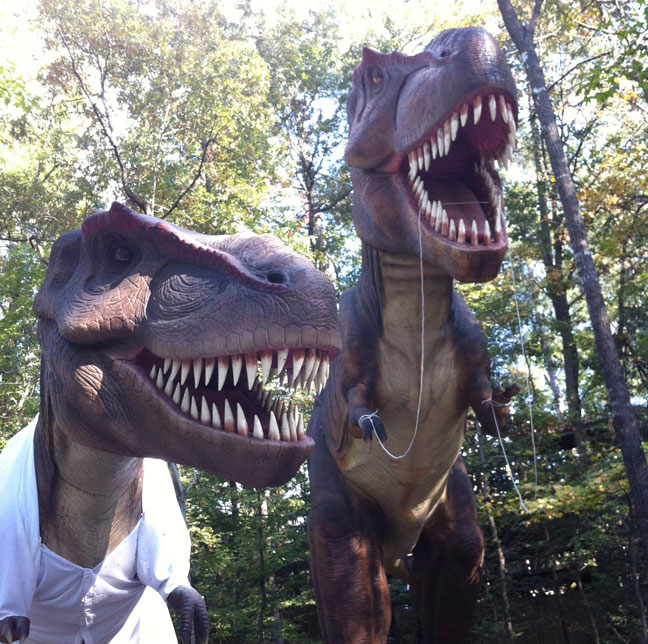 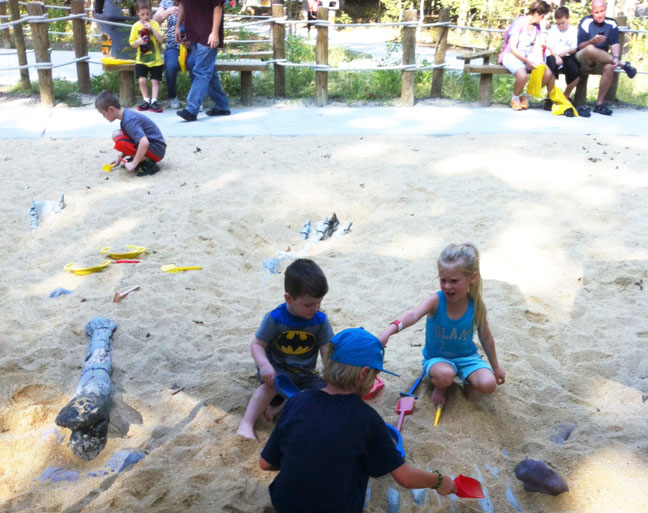 A sand pit offered a welcome respite for parents while the kiddos dug for bones in the sand. JJ chatted up the “park ranger,” bonding over their shared love of Stegosaurus.

Several dinos had buttons to make them move and roar. JJ was VERY impressed.

As with Planet Spooky, I don’t think the kids would have had any less fun without the candy and costumes, but it was certainly a hoot for us grown-ups to see a T-Rex flossing his teeth or a Whatever-a-saurus with bunny ears.

Saturday and Sunday (October 26th and 27th) is the last weekend for Planet Spooky and Dinosaur Trick or Treat, so hurry and check it out! These two areas are open from noon to 5pm. And if you’ve got little kids with you, you’ll probably want to scat before 7pm, when King’s Dominion’s “Haunt” kicks in and all the freaky, fangy folk come out. Although JJ assured us, “I’m not sca-uhd. I’m bwave!” 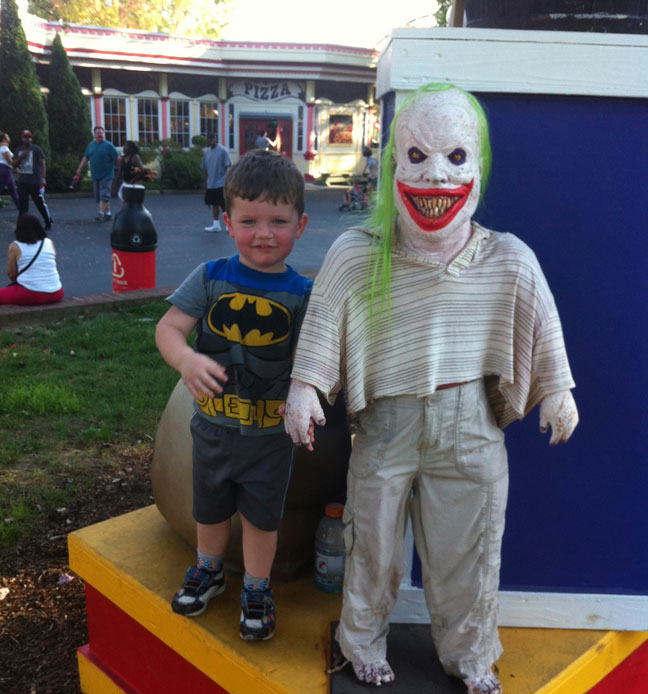 Proper dental hygiene certainly seems to be a theme for today.

With lots of highs and only one bumpy low, the day was definitely a success. This was most evidenced at dinner afterwards. We met Grandma and Grandpa in downtown Fredericksburg, VA — and while JJ is normally a pretty picky eater, he devoured a pile of spaghetti and bread and was an all-around pleasant dinner companion. As we were leaving, the waiter commented on what a well-behaved boy we have. I knew it was largely in part to him being exhausted from his fun-filled day, but I accepted the compliment graciously, knowing I had a good ending for my blog post, and would have a soundly sleeping son on the ride home. 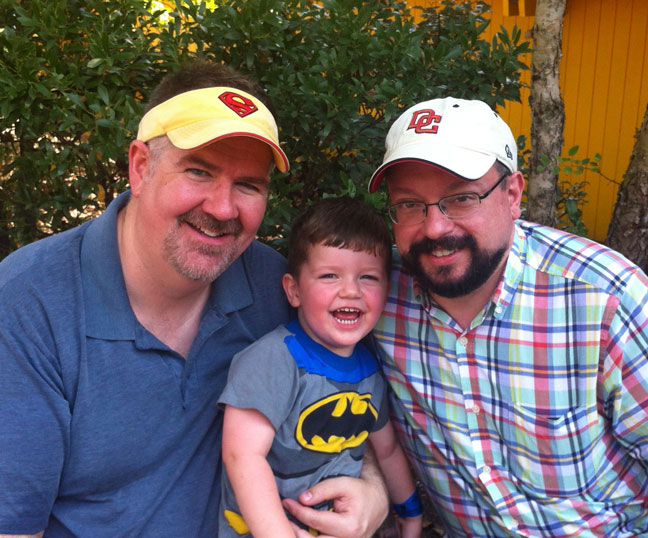 All-in-all, a frightfully fun-filled day for our little fam.

[Disclaimer: We were given free general admission tickets and tickets to Dinosaurs Alive by Kings Dominion in exchange for this blog post. Regardless, I only recommend products or services I use personally and believe will be good for my readers. All opinions are mine and/or JJ’s.]