We’ve been watching Modern Family since its debut in 2009, because A) It’s pretty darn funny and B) Mitch & Cam.

Papa and I have been compared to TV’s quintessential gay dads quite a few times over the years. (My trainer at the gym once told me “You’re like the big guy, because you’re so, um… funny!”) And their milestones have mirrored ours on many occasions. Like when Lily dropped the F-bomb. And when they thought she dropped the M-bomb. And when their adoption fell through.

The show’s fifth season premiere (“Suddenly, Last Summer”) began with a date stamp of “June 26, 2013,” then proceeded to weave the Supreme Court’s eventful decision of that day into a plot about Mitch and Cam each planning a surprise proposal to the other. Of course hilarity and calamity ensued, with both sets of romantic scenarios being botched. They ended up with a blowout in the Hollywood Hills, overlooking the light-filled city below and stars overhead. While replacing the tire, the couple reminisced about various mishaps and adventures they’d shared in their decade-long relationship. As they both knelt down (on one knee, natch) to attend to the tire, it dawned on them what each other had been plotting. They looked into each other’s eyes and simultaneously said, “Yes.” 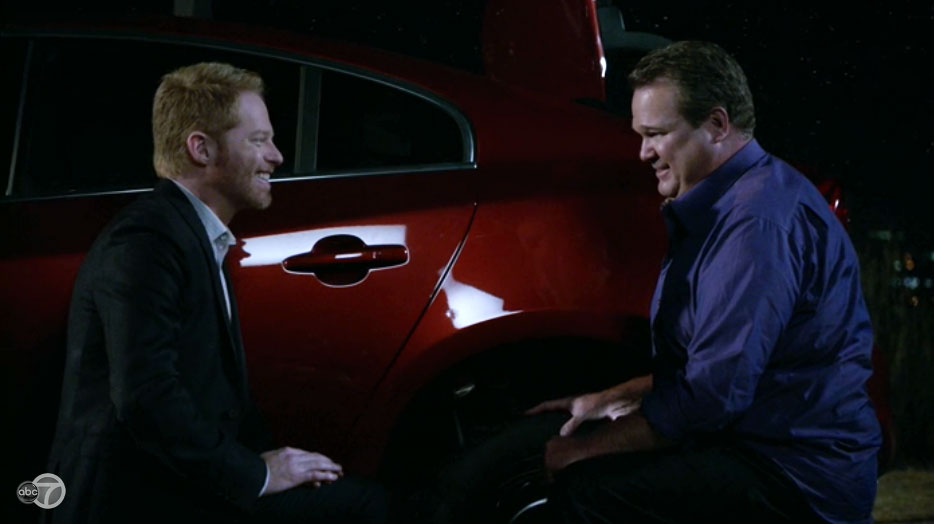 And simultaneously, Papa and I both sniffled and said, “Awww.”

While the characters of Cam and Mitch are not without fault (they could certainly stand to be more affectionate), and stereotypes abound, I do appreciate the significance of this storyline on an Emmy-winning, Nielson chart-topping, major network show.

Yet what really made an impact was not just a gay couple proposing to one another, but the genuine portrayal of how this moment might play out between a couple that had been together for so long. A couple that would have gotten married much sooner (had it been legal), yet remained together and built their family their way. Not a lot of precedent for that on TV or in popular culture in general.

Like Mitch and Cam, Papa and I and many other same-sex couples have committed to one another for the long haul, forming our relationships and our families as best we knew how. Often without any support from government, church, family or society as a whole. These hindrances are swiftly falling away, and I couldn’t be more thrilled. And I’m thrilled for the new(er) couples that are meeting, falling in love, and able to get married just as God and Hollywood intended — while they’re still young and hot for each other.

So why is it significant that this TV couple has been together for so long? To the straight, married readers: can you imagine, having been with your partner for 10, 15, or 20 years, planning, hosting and paying for a wedding at this point in your life? Between work, paying bills, caring for a house and raising kids, just setting a date would be an achievement. Am I right?

So I really appreciated how Modern Family’s writers and producers showed this long-together couple — in the midst of a busy, chaotic, and deeply entrenched life — struggle and scheme to make this moment as historic and romantic as possible. And as would be in the real world, they had to take the time life gave them and make it their own, in their own way.

My partner/husband/Papa and I will have been together 17 years in October. (A common joke amongst gays might go, “That’s 34 in straight years!”) In the fall of 2003 we had a commitment ceremony in a lovely Unitarian church, nestled in some woods, surrounded by over 100 friends and family. It was the closest thing to a wedding available to same-sex couples at the time, and it was truly wonderful.