It was JJ’s second week of preschool, and while reviewing the calendar for the next week I noticed something that made my heart skip a beat. “TUESDAY: DRESS UP AS A CLOWN DAY.”

I had known it was going to be Circus Week all week (OMG, how fun is preschool?!?), with visits from clowns, balloon animals, and a tumble on the Tumble Bus, but somehow I’d missed this little detail. Thus, on the eve of Dress Up As A Clown Day, it became Daddy’s Making a Homemade Clown Suit the Night Before…Day, er… Night… something.

As soon as JJ was in bed, I morphed into full-on Designer Daddy mode. I giddily sent out a tweet, void of my frequent sarcasm: “Making a clown suit for Circus Day at preschool tomorrow. Now THIS is what I signed up for!”

I dragged all my bags and boxes of unused crafts out of the basement (organized craft supplies are for wimps and people with their own talk shows), grabbed a Diet Coke, shut my office door and set to work.

I know you’re probably here for the cute pics of JJ as a clown (we’ll get to them), but I thought I’d first share my “process,” in the off-chance any of you ever need to whip up an emergency clown suit.

It’s kind of a step-by-step, except without the easy-to-follow part. I was making it up as I went along… 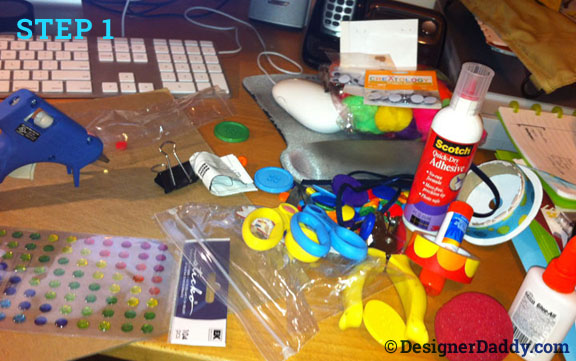 STEP 1: Dump all your crafts onto your desk.
Okay, this isn’t ALL my craft stuff, but is a bunch of what I thought might come in handy. 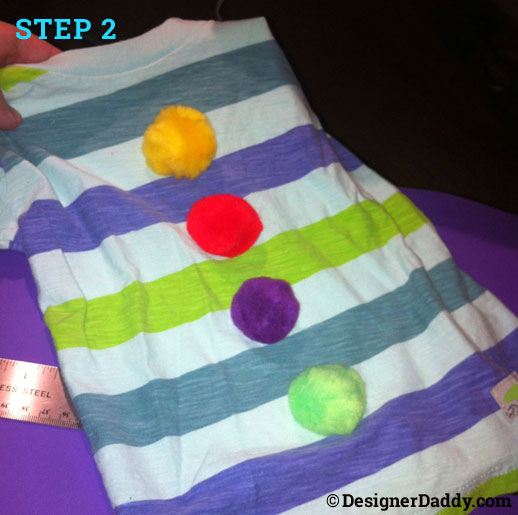 STEP 2: Make the shirt.
I pulled out all the shirts of JJ’s that were soon-to-be too small, or would be too small by Spring. Of course we’re now in the middle of a September heat wave, but oh well. I chose this one (from Naartjie) because it’s colorful and because there’s a stain on it… Which is now conveniently covered by a pom-pom. Hint: Think about the color palette you want to use before you start gluing crap together. You can use every color in the rainbow, but make sure there’s SOME forethought to it.

I attached the pom-poms with a spot of hot glue, surrounded by a ring of Elmer’s. Why two glues? I didn’t want to hot glue the bejesus out of his shirt (it would be all hard and crusty on the inside) but I knew the Elmer’s wouldn’t be enough on its own. Hint: Slide a piece of cardboard inside the shirt before hot-glueing. Otherwise, you’re gonna hot-glue the shirt to itself.
. 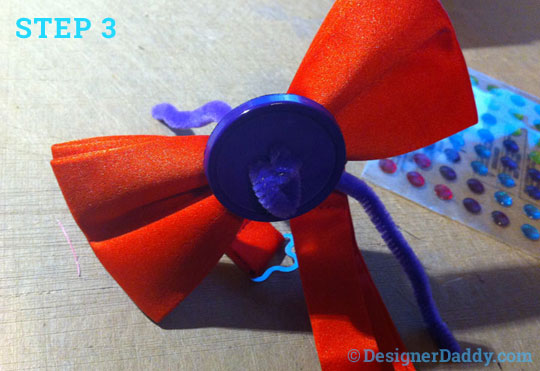 STEP 3: Make the bow tie.
My goal was to permanently alter as few garments as possible. JJ’s shirt was the only one I glued something directly on. This is where the pipe cleaners came in handy…

We’d worn these red bow ties for Halloween a couple years ago — I threaded a purple pipe cleaner through a big-ass purple button and twisted it around the back of the bow tie’s knot. Be sure and tuck the ends of the pipe cleaner under the knot, or else they’ll poke your kid in the neck and he’ll rip that thing right off. And what’s a clown without a bow tie? A hobo, that’s what.
. 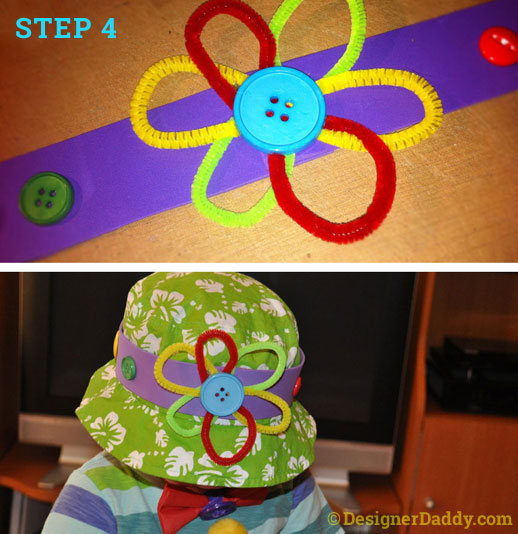 STEP 4: Make the hat.
Here’s where the foam paper comes in handy. Or headbandy, rather. I measured around the hat I was going to accessorize (a goofy, floppy thing from the DC Zoo Grandma wore once then gave to JJ) then cut out a band that length plus a few inches extra. I again used a combo of hot glue and Elmer’s to create the front button/pipe cleaner flower, gluing the twisted pipe cleaners with hot glue to the back of the button first, letting it dry, then adhering the whole thing to the band. I added the other buttons, let it all dry, stapled the ends together a few times, then it just slipped over the hat. Hint: You can also use pipe cleaners to make stars or other shapes, antennae (with pom-poms glued on the end), or make them into silly glasses. The pipe’s the limit!
.

STEP 5: Decorate the shoes.
I glued 2 pom-poms together on either side of a pipe cleaner. Once it dried, I twisted it under the strap of JJ’s sneakers for instant clown shoes (see photo below). I pulled it all together with a not-quite-matching pair of striped pajama pants.
. 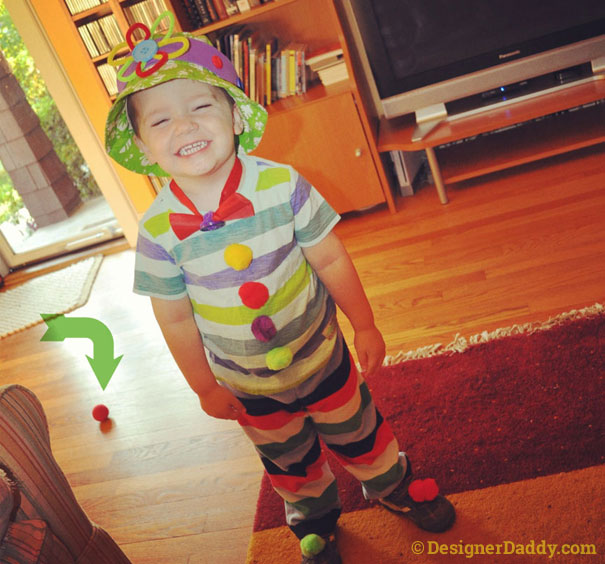 THE FINISHED PRODUCT!
As you can see, the nose didn’t stay on, but my other goal was to make an outfit JJ would be comfortable in all day. We were running late and I didn’t feel like stapling the nose to his face, so it stayed home. But he’s still pretty clowny, dontchathink?
. 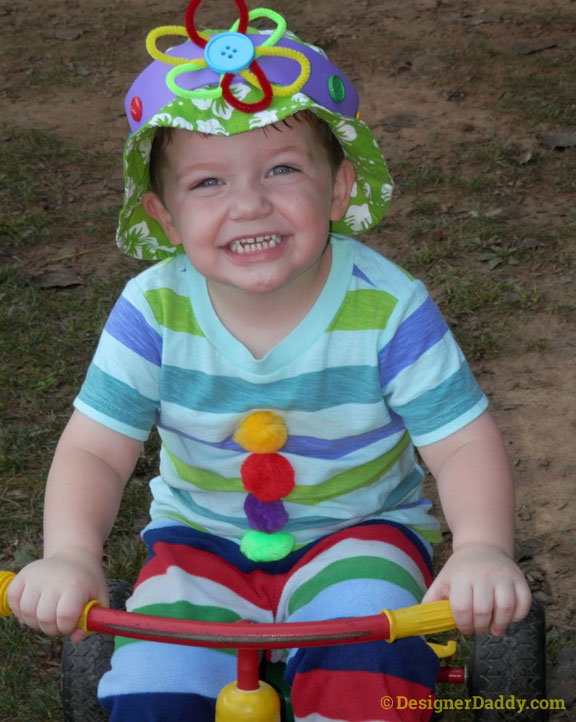 BONUS PHOTO: The school took a bunch of pics of all the wee clowns to email to parents, and this grinny one of JJ on a trike (perfect clown transport!) made the cut. Looks like he lost the tie, but otherwise, still clowning and smiling up a storm!