(Way) Back to School

So I have a kid in school now. Whoever thought I’d be saying (or writing) those words? I guess up until now I’d never thought much about it. With the exception of a few months my sophomore year, I loved school, and my early school memories are full of color and letters and art and really nice, really tall teachers. But leading up to JJ starting preschool, I hadn’t had time to think about those memories. All my time and energy was spent worrying about how and where to find the right school. Private, public, magnet, charter. The only ones we could definitively rule out were of the conservative religious variety. So when we finally found one, the frenzy then migrated to figuring out work schedules, pick up/drop off coordination, and a mortgage-sized stack of paperwork. And the getting of all the stuff: new shoes, backpack, lunch bag, little Tupperware containers. Not that I didn’t love it. Because A) Daddy loves to shop, and B) kids have the coolest stuff.

But in between the searching and the deciding, we visited the school that would eventually be The One. As Papa, JJ and I walked into the brick building, down the hall covered in bulletin boards, and into what would be JJ’s classroom, all those early school memories came flooding back. So much color, so many letters, artwork everywhere; bins and jars and shelves overflowing with untold treasures.

Papa was busy asking the administrator all sorts of responsible, adult questions about money and hours of operation, while I kept an eye on JJ, who was keeping an eye on the class on the other side of the room having story time. I then watched as he walked over to a munchkin-sized table and started taking apart and putting together a group of puzzles that had been laid out, around six or so. As he was finishing the last one, I bent down to watch him more closely. It was wooden, painted in bright colors, and had ten pieces consisting of numbers zero through nine. It didn’t play a song or light up or have any buttons to push, and it didn’t teach any lessons about sharing or the environment or how to speak Chinese. Wood, paint and numbers — that was it. While the numbers weren’t perfectly formed, they also weren’t done in an annoying “child’s handwriting” font. Someone’s hands had obviously been involved at some point in the creation of this. 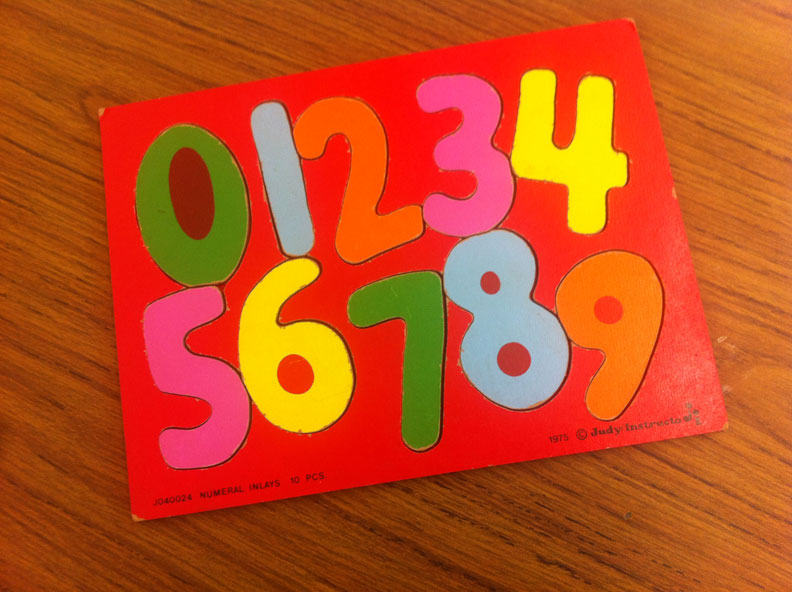 JJ made quick work of it and moved back to the first puzzle to re-start his process while Papa continued to gather vital information about our son’s education. I leaned in closer to the numbers puzzle and saw this in the bottom right corner: 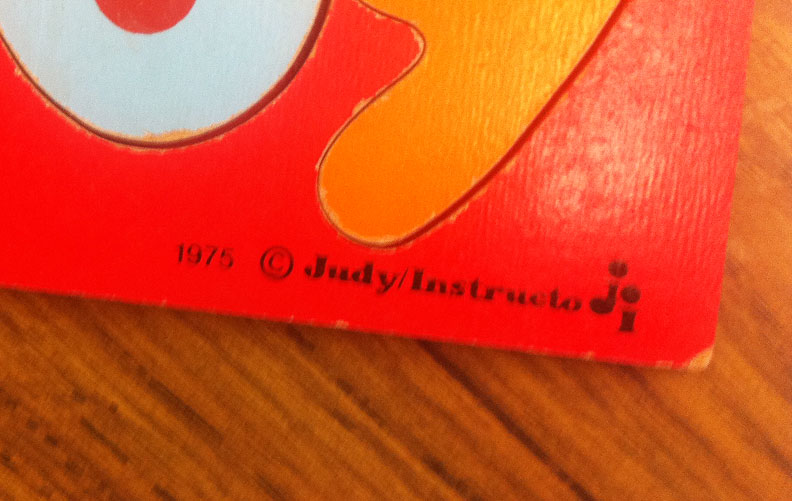 Wait… what? 1975?!? If I hadn’t already been awash in nostalgia I might have been concerned this school had such outdated toys for my son to play with. Back to school? More like WAY back to school. We’re talking decades… DECADES of germs. And not to mention such an antiquated teaching approach. There weren’t even any robots or multiracial children or Disney properties on it!

Yet deep in remembrance as I was, what immediately came to mind was that I could have played with this very puzzle at JJ’s age. Granted, I  would have been six, and a little old to be learning to count. But it was definitely of my era. It gave comfort to this old dad. As a father that’s grayer than most toddler dads, it’s something that weighs on me from time-to-time, both physically and emotionally. So to see something from my early school days making its way into my son’s made me feel connected to him on his new adventure. And it was reassuring — a sign, if you will — that we’d found the right place for him to embark.

8 responses to “(Way) Back to School”