Scroll down a bit to the lovely infographic of my chunky self, and you’ll see I’ve shed 4 lbs since starting my Chuck the Chunk (CTC) weight loss adventure. I lost all four the first week and then held steady the following week. That probably had something to do with attending a wedding on the weekend, as well as a weeknight of late night concert-going (and more than a bit of revelry) followed by some even later night snacking.

I need to step up my game. (Did I just say that? I think someone says that in every episode of every reality show competition, ever. And also “I’m bringing my A game!” If someone sees me write that, smack me. Or call the police as someone has hijacked my blog.) … Where was I? Oh yeah, I need to step up my game if I’m going to keep up with my fellow Chunkers. Like this guy, who’s our second heaviest, and lost 13 lbs his first week! Or this fella making nasty-looking stuff to drink he calls “Hulk Juice.” Or this dude, who’s been running 5ks right up until (and even after) his wife gave birth to their second child. I’d be stress-eating for weeks before AND after. 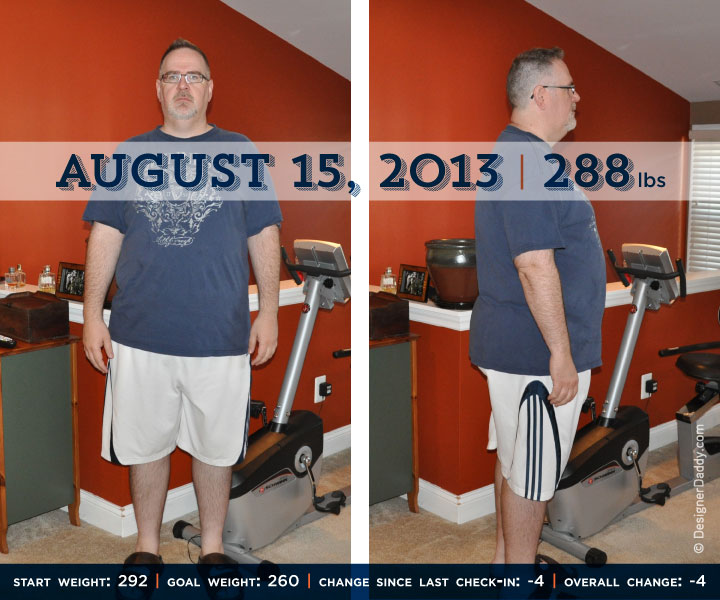 For your viewing pleasure

I’ve been asked a few times what I’m doing to lose the weight. For the first time ever, I can give the boringest, least-magical answer ever: eating less and exercising. To track all that boringness, I’m using My Fitness Pal, where I set goals for weight and a time period to lose it, and it gives me a calorie total based on my current weight. I’m also “pals” with several of the CTC guys, which adds to the comaraderie/competition.

I’m pleased with the subtle lifestyle choices I’ve made so far, which will hopefully keep me from going to extremes in the wrong direction. I’m fine going slow and steady — as long as I’m steadily losing. See you in two weeks.