A Journey to Family

I haven’t written much about JJ’s open adoption or his birthparents up to this point. We’ve always felt it best not to share too much of his story beyond what we’ve told him. However, several developments during our most recent visit moved me to venture into some of this undocumented territory. 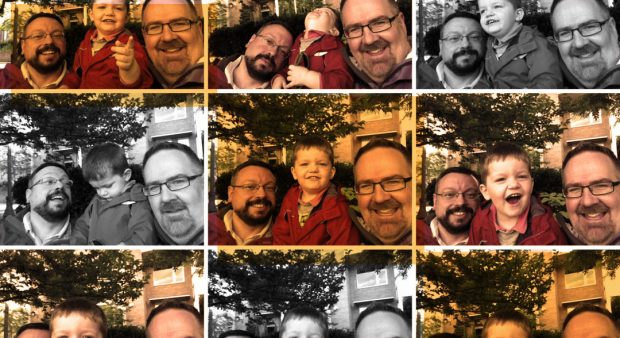 Leading up to the trip, life was even more frenzied that usual. In a “normal” June, the middle of the month delivers the 1-2-3 punch of Pride, my birthday and Father’s Day; this year each was only four days apart. Our regularly packed work schedules were even more loaded down with pre-vacation deadlines and coordinating handoffs. We were scurrying to find a preschool for JJ, overwhelmed by the options. Two days before Father’s Day, my first article for The Huffington Post was published — a nice stress to have, but stress nonetheless. The following day, an interview Papa and I did for CBSNews.com went live. The article, while itself wonderful, quickly racked up large numbers of vile comments of the homophobic/hateful/crazy variety. I had to stop reading, distressed and fearful I’d put my family too far out there. For nearly 12 hours, I was really thrown off track. But Papa and my more experienced blogging buddies consoled and rallied behind me, respectively, and I got back to enjoying my Father’s Day and packing for our cross-country jaunt… which was the next morning.

It had been two years since we’d last seen JJ’s birthparents, and he was now two years older, wiser and more inquisitive. We’d been using the word “adoption” around JJ for a while, but he had no memory of meeting his birthparents, and needed a refresher course. Shortly before the trip, I set up a slide show on the TV, and we watched as a family, pointing out his birthparents from our initial meeting (when JJ was still in birthmom’s tummy). We looked at images of our first days with him in the hospital, the subsequent time in a hotel awaiting adoption paperwork to clear, and our first weeks at home. He’d seen these many times before, but this time we mixed in photos of his birthparents, explaining where they fit into his story.

We also reintroduced JJ to his brother, showing him pictures of their previous meetings. JJ’s biological brother (who I’ll call “BB”) is 364 days his elder. They’d met twice before, but it was all new to him. “Dat my brudder?!?” he asked with amazement. It certainly raised his level of excitement for our excursion, which I wasn’t sure was possible. And yeah, it added to my already heaping pile of worry.

I’d been thinking about this day — the “JJ, This Is Your Life” presentation — for months years, yet never able to picture how it would turn out. While relieved it went smoothly, I realize this isn’t the last of these conversations by a long shot. And I know they’ll likely be more difficult down the road. Nevertheless, I was glad to have it under my belt. And as I’ve come to learn about everything you tell a toddler, they get excited or they get upset, then something shiny happens and they move on.

So even before we left, some of my worries were assuaged. And it only got better from there.

Our relationship with JJ’s birthparents has always been a delicate one. It began with time spent trying to find things in common, though all we really shared was that little guy in her belly. Our worlds couldn’t have been more different: geography, age, income — all separated by many states, years and dollars. Yet here we were, building something from nothing beyond a shared concern for a child-to-be. After JJ was born, we spent the first couple of years trying to strike the right balance of inclusion and boundaries. I admit that my insecurities evolved into resentment at times. Resentment that I had to share my precious child, even if it was just several times a year by phone or email, and for a few hours in person.

In the two years since our last meeting, our clan of three had bonded in sickness and marveled at growth spurts; shared jokes and battled tantrums; grown closer to extended family, both nearby and across the ocean. We had legally been a family from the onset; we were now a family in the truest, deepest sense.

I felt this depth grounding me as JJ’s birthfather and birthmother entered the pizza place they’d suggested for lunch. There’d been a shift in me, and I knew things — he, me, us, them — would be fine.

The visits with the birthparents were good, a chance for them to see JJ in action and to play and tickle and hug — some topnotch toddler bonding time. Little-to-none of the anxiety I’ve experienced in the past burdened me this trip. I struggled a long time with wondering how the birthparents would act around JJ, how we would act around them, what either couple might say that would make the other uncomfortable or confuse JJ. However we’ve all settled a little more into our roles, in relation to JJ and to each other. We were like distant family catching up, talking about how much the boy has grown, who he looks like, what he’s eating, which superheroes he likes.

It also came up that the birthparents had discovered my blog, which I admit was a little jarring. I hadn’t been hiding it from them, but also hadn’t advertised its existence. They told me how they enjoyed it, seeing extra pictures and hearing additional stories beyond what we’d shared with them via email or on the phone. And at breakfast the morning we left, Jon’s birthfather floated the idea of writing something for me to post on the blog sometime. He said they’d love to share their thoughts on how happy they were with the decision to pick us as Jon’s parents, thoughts that had been reinforced by the various stories and images they’d seen. I was genuinely speechless — such a wonderful and touching sentiment. 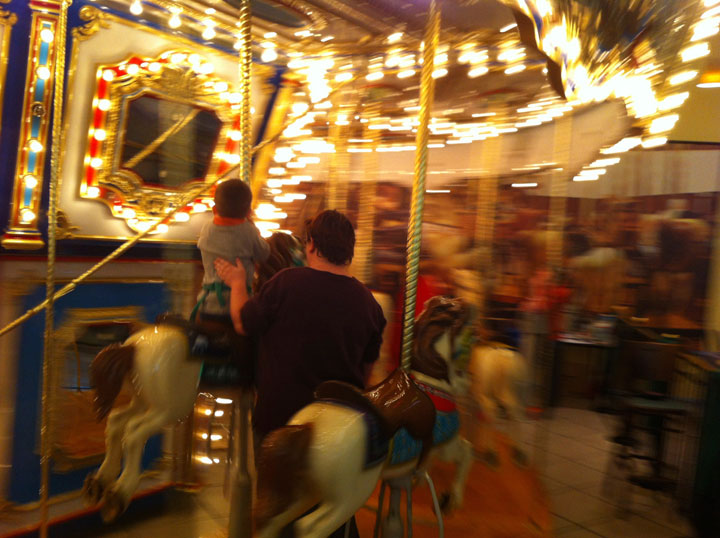 JJ and his birthmother

The brightest highlight of the trip was our visit with JJ’s brother, his adoptive parents and two younger sisters. We drove to their house, almost an hour from our hotel, through lush, green countryside which seemed to set us at ease the further we drove. As we walked in the door, the boys said hi and immediately hugged. All four kids hit it off and hit the ground running, playing with trains and kitchen sets and showing off their somersaulting skills. JJ sat at the kids’ table and the four adults sat around the dining table or stood at the bar, bringing back fond memories of the similarly segregated family dinners at my Grandmother’s house.

After dinner was lots of running around in the backyard. I taught the kids “Duck-Duck-Goose” which quickly devolved into a free-for-all game of tag. Then on to the park at a nearby school, where JJ rode his brother’s bike — his first time pedaling a 2-wheeler (with training wheels) on his own. BB showed off his considerable jumping-out-of-the-swing skills, leading to only one mishap, and resulting in JJ going over to comfort him and the best photo of the day. 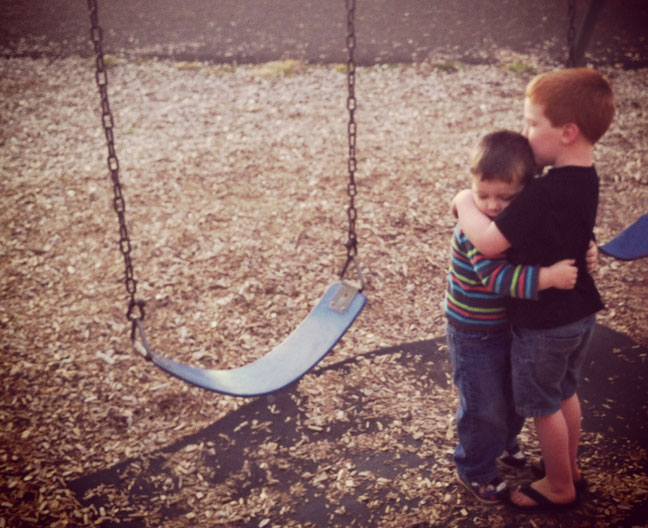 We managed to get them all back to the house without too much cajoling, took several pictures of the kids hugging and hamming it up on the stairs, then headed back to the hotel. Before he nodded off in the backseat, JJ asked more than a few times if we’d be going back the next day.

After we’d put in all our visits with biological family, the next day consisted of time for us, our chosen family. A walk along the river to dinner became a live-action version of “The Three Little Pigs” with me and Papa as the pigs, park benches as the houses of straw, twigs and stone, and JJ as The Big Bad Wolf. We stopped on the final park bench for an extended photo session, attempting to capture a decent family “selfie.” A perfectly simple and silly way to cap off a perfectly special trip. 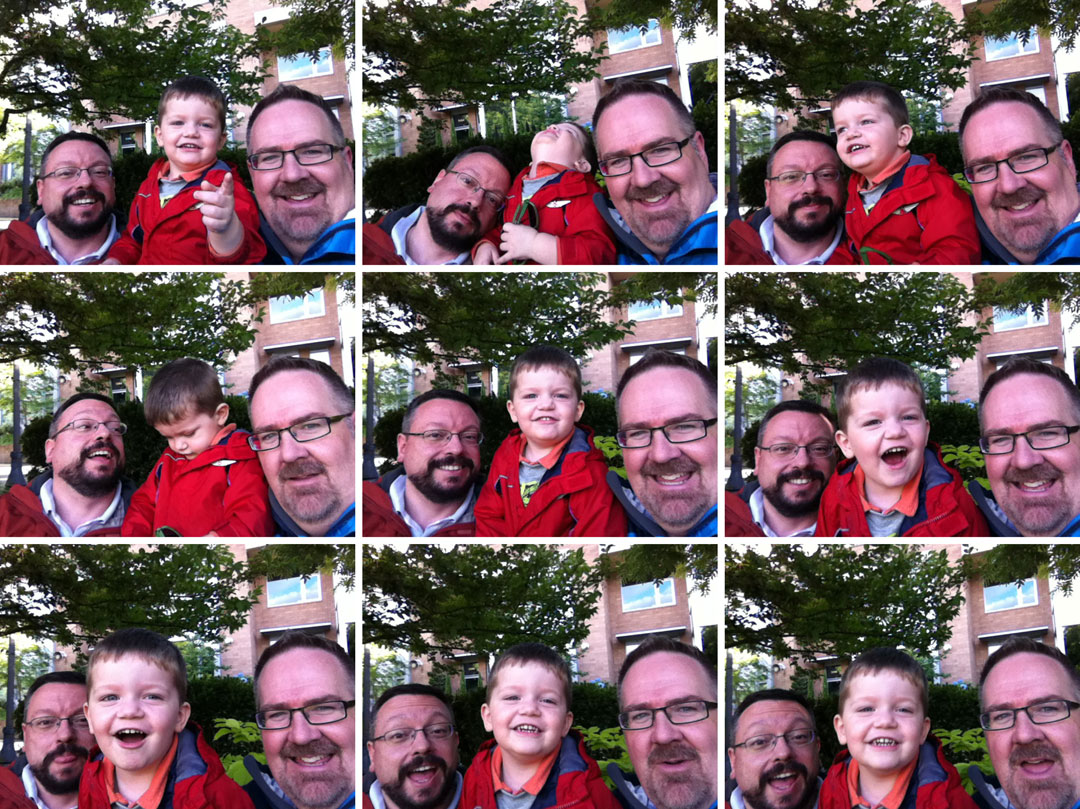 The quest for the perfect family selfie.

Of course there were stresses and snafus and such, as there are on any family vacation, yet we came back feeling more bonded together. We flew across the country, spent time with JJ’s birthparents and biological brother, and felt closer because of it. (That’s something I never thought I’d see myself write.) Sure, this was partially because of the extra time we had to talk, to play, to eat together — something we don’t get enough of in “real” life. But I believe it was also because we were doing what was best for JJ, for our little family, and ultimately for our family’s future.

These relationships still seem a bit foreign to me sometimes, and I think I’ll always worry how JJ will handle his atypical family makeup in everyday life. Yet there is a history of secrets in previous generations of my family that I desperately want to avoid. The scars of these secrets still show themselves from time-to-time, these many decades later. So while our complicated cross-country family tree may be different and hard to define, I believe it’s only made healthier and stronger by our openness. 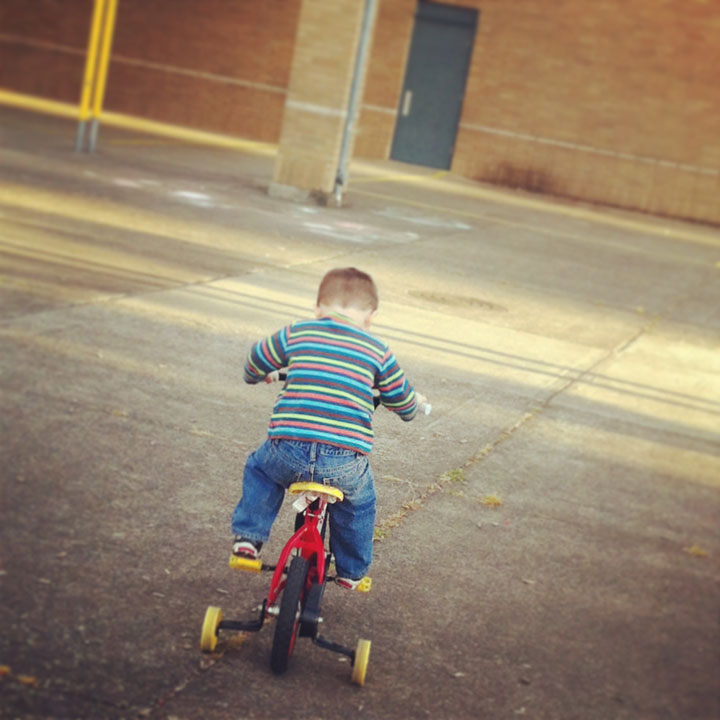 I’m sure that soon enough we’ll be worrying less about relating to the birthparents and start dealing with JJ’s questions about them, about us, and how we all relate to one another. I need to be sure and come back here and remind myself that my worries worked themselves out through honest communication, and that it’s all part of our journey as a family. I can’t wait to see where the road takes us next.

If you’d like to get all Designer Daddy posts delivered to your in-box, scroll up, enter your email address under the SUBSCRIBE header, and you’re all set!

20 responses to “A Journey to Family”