Like most of the world, I was first introduced to the work of Evan Spiridellis (the designer half of the humor site, JibJab) through the still-hilarious lampoon of the 2004 presidential election, “This Land.” In 2011, he and brother Gregg launched StoryBots, an awesome online land of apps, videos, books and activities for kids (and parents). As a longtime fan, I was downright giddy Evan agreed to a DDQ&A!

Tell me briefly about your design/illustration career.
My brother and I started JibJab back in 1999. Early on we supported the studio by doing service work for clients like Disney, Scholastic, Kraft and Sony — but the goal was always to build a new kind of entertainment company. So we would take on enough client work to pay the rent and our team, then we would turn down commercial projects until the coffers ran dangerously low. Nowadays, JibJab supports itself by selling our products directly to our audience without commercial interference. We much prefer this approach 🙂

How has fatherhood affected or influenced your work?
Well first off, being a dad is just the absolute greatest thing on earth. It’s so incredible that you can’t even begin to describe it to someone that isn’t already a parent. Having these little people in your life changes the way you see everything, so work is certainly part of that. Having children and watching first hand the way they were interacting with technology was definitely what lead to the creation of StoryBots.

We are extremely aware that the way kids are consuming and interacting with media is changing fast! Their entire entertainment experience is different from what we grew up with, and it’s really exciting to watch. We look at all of the stuff they look at, then talk about ways to enhance and improve it.

.
Have you ever designed anything for or related to your children?
Halloween is a BIG event at our house. We usually round up as a family in June to decide on our theme, then building costumes becomes our summertime project. Last year the boys wanted to be Transformers after discovering the 80’s cartoon on Netflix. We made these costumes with cardboard boxes and LOTS of duct tape… 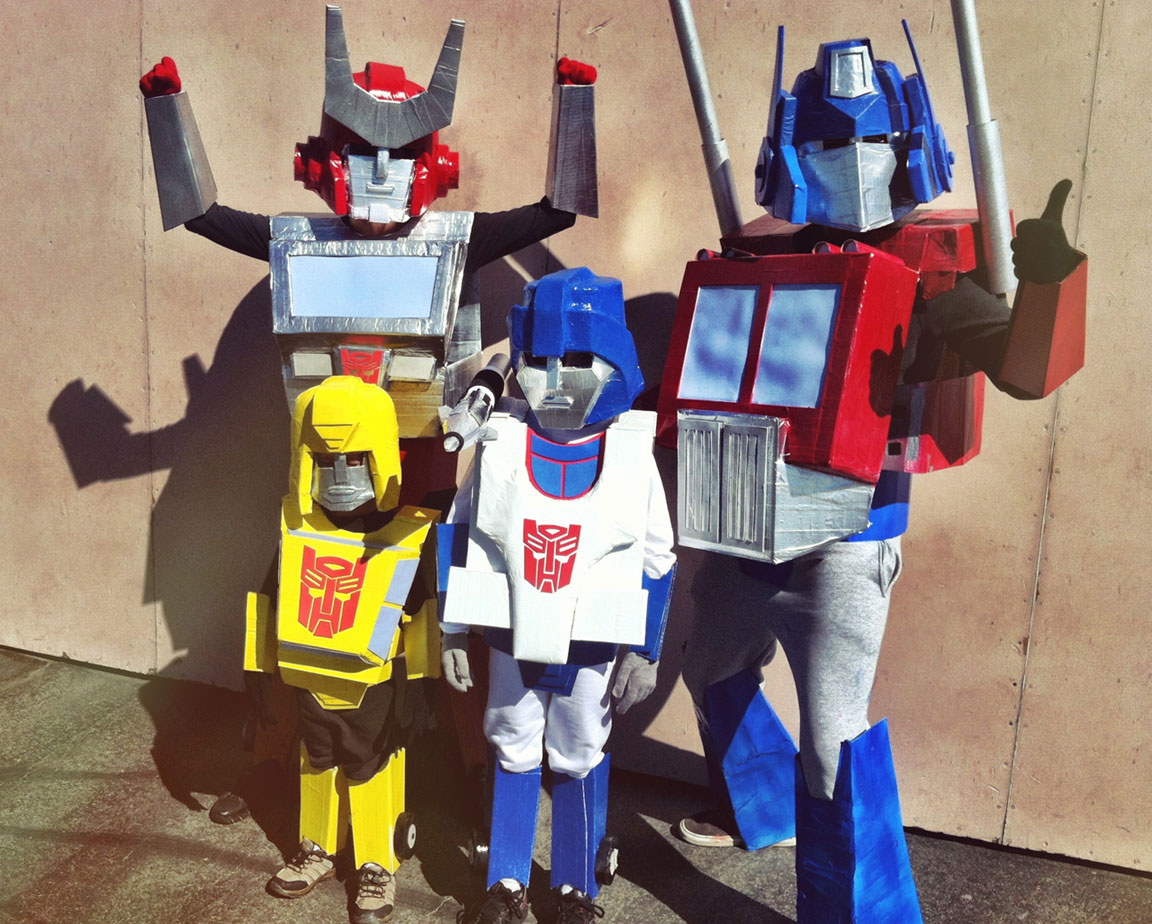 Spiridellises! More than meets the eye!

How has being a designer/illustrator informed or influenced your role as a father?
I don’t know if being an illustrator has informed my role as a father, but I will say the kids think it’s cool that we can draw and make stuff together. My wife is also extremely creative, so between the two of us we always have something going on in the house. (Evan’s wife performed all the music in “This Land,” among other things. -DD)

How do you find balance (or a lack of it) between being both a designer and a dad?
That’s a really tricky question. I guess I just deprive myself of sleep and do the best I can. I know that I am more active and involved in my kids’ lives than most fathers, but I still wish that I could do more. The one definitive change I have made since having kids is that I rarely do work-related work on the weekends any more. For the first 9-10 years of JibJab my brother and I were in the office 6-7 days a week. These days I really try to carve out the weekends to be with my family. Of course weekend work still pops up now and then, but I really try to make Saturday and Sunday family time.

What designs/products/pop culture left an impression on you as you were growing up? Do you see anything from childhood as influencing your tastes or own style as a designer?
If I had to pick one major influence from my childhood I would say it was Jim Henson and The Muppets. There was a good-natured chaos at the bottom of everything they did and I’d like to think some of that is in what we do as well.

How did StoryBots come into being? Did becoming a dad contribute to the creation of StoryBots?
Being a father played a huge role in the creation of StoryBots. When we started JibJab, neither my brother nor I were even married. Fast forward 14 years and we have 5 kids between the two of us — so we are extremely aware that the way kids are consuming and interacting with media is changing fast! Their entire entertainment experience is different from what we grew up with, and it’s really exciting to watch. We look at all of the stuff they look at, then talk about ways to enhance and improve it. Plus, I have always been drawn to family entertainment. Even before founding JibJab in 1999, I had been working on developing a kid’s show for television. The difference now is that having two kids completely changes the way you see the world. I don’t think I could have made truly “authentic” programming for kids and parents without having kids and being a parent.

Screenshot from a StoryBot “Starring You” video. Starring JJ of course!

Is there any kids product whose design you really like?
I see lots of great stuff out there for kids all the time. One of my new favorite books is The Great Lollipop Caper by Dan Krall. I also feel like the bar on family movies has slowly risen over the past few years. Fifteen years ago it was all about Pixar and only Pixar. Now Pixar still makes incredible movies but DreamWorks, Sony, Disney, LAIKA and Blue Sky are all putting out really solid stories, too. Or maybe I’m just more easily entertained now, but I don’t think so 🙂 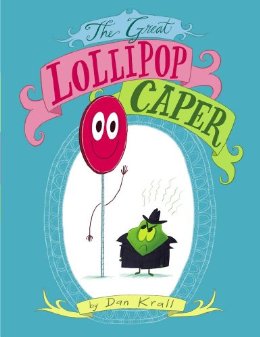 Any kids’ products you can’t stand?
There’s nothing specific that I can’t stand, but I will say outside of feature films it’s hard to find content for kids that plays older and younger. There are great shows out there for my 7 year-old that I am not comfortable putting my 4 year-old in front of. And the stuff that’s appropriate for my 4 year-old drives my 7 year-old crazy. What we are aiming to do with StoryBots is create content that 3-8 year-olds can all enjoy. And more importantly, their PARENTS can enjoy it, too. Call me selfish, but I want to be able to hang with my kids and still be entertained as well.  That was the magic of The Muppets. It’s really hard to do, but when it’s done well it can’t be beat.

Anything else you’d like to add? New projects coming up?
I am VERY excited about all of the StoryBots content in the pipeline. We currently have 30 animated “Starring You” children’s books in our book app, as well as monthly releases scheduled through the Fall of 2014. We have over 90 new videos in active production across a range of topics, and we have some really great apps in the works. Our corporate mission is to make “Billions of People Happy” and I think we’re on our way to doing it!

I want to again thank Even for taking the time to do this Q&A. PLEASE check out StoryBots — whether you’re a parent, designer, or just like cute/cool stuff on the interwebs! You can also check out additional StoryBots graphics on their Tumblr site, and visit Evan’s personal blog, too! Oh yeah, and it looks like Evan’s also busy raising up the next generation of creative Spiridellises… 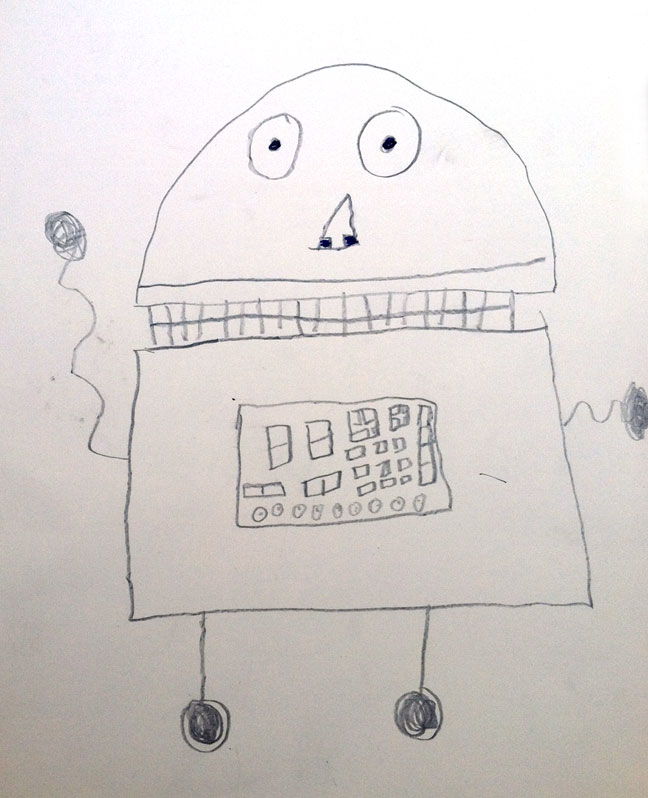