A Gay Man’s Moment of Patriotism 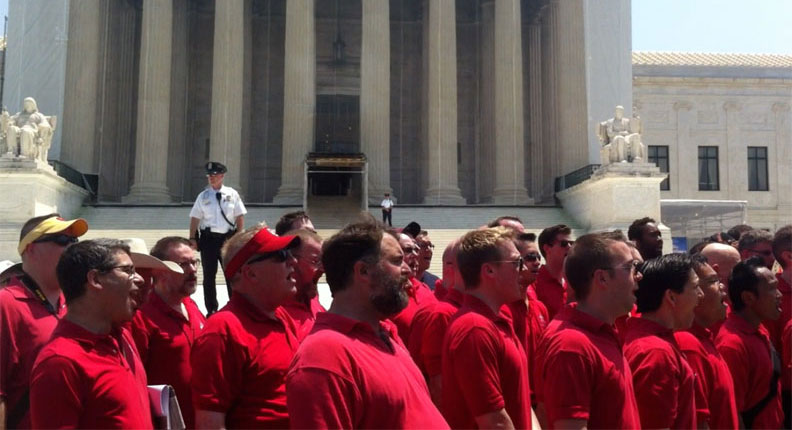 I jumped out of a cab and into the sweltering DC heat. I jogged across the street and joined the other 100 or so men in red polo shirts standing across the sidewalk from the US Supreme Court Building. It was June 26th, and less than two hours before, DOMA and Prop8 had been struck down, giving significant momentum to same-sex marriage, and LGBT rights overall. This was more momentum — and public, official support — than gay America had ever experienced.

The guys in red were my friends family and fellow members of the Gay Men’s Chorus of Washington. We had been on call for a couple of weeks, awaiting word for when SCOTUS would read their rulings on these closely watched cases. The call had come, the rulings had been read, and we were there to sing — thankfully not in protest, but in celebration.

It was our time — so like a big, sweaty amoeba, we squeezed through the crowd of camera crews, ralliers and a grumpy passer-by or two. As we neared our designated spot, a cheer rippled through the group and I spotted Barney Frank trying to make his way in the opposite direction. I snapped a quick photo, then leaned in for an overly eager hug and a too loud “Thank you for all you’ve done!” in his ear. I may have even kissed his cheek.

We finished forming our rows in front of the steps; our director raised her hands to lead us in the first of our two songs — “Make Them Hear You” from the musical Ragtime. Written from the perspective of African-Americans at the turn of the 20th Century, the lyrics are universal in their admonishment of maligned people to protest peacefully, yet loudly. We reached the final verse…“Go out and tell our story to your daughters and your sons,” and I thought of my own son and the ever more tolerant world he’s growing up in.

We then began to sing the national anthem. I’m amazed at how incredible it feels — both musically and emotionally — to sing this. It’s a powerful thing to hear a host of men’s voices blending together, marginalized citizens showing pride and passion about the country slow to embrace them fully. I’ve had the privilege to perform it with GMCW several times at Washington Nationals’ games. Being behind home plate, hearing our voices echo up into the cavernous stadium full of fans, catching a glimpse of myself on the jumbotron — the experience is always exhilarating.

But that day in front of those steps, it was different. More momentous, yet more intimate. A shift had occurred, and we’d been brought one step closer to equal with our heterosexual neighbors, families and fellow citizens.

If you haven’t thought about the lyrics of “The Star-Spangled Banner” in a while, take a moment to do so:

Oh, say can you see by the dawn’s early light
What so proudly we hailed at the twilight’s last gleaming?
Whose broad stripes and bright stars thru the perilous fight,
O’er the ramparts we watched were so gallantly streaming?
And the rocket’s red glare, the bombs bursting in air,
Gave proof through the night that our flag was still there.
Oh, say does that star-spangled banner yet wave
O’er the land of the free and the home of the brave?

We all know the anthem is about our flag, surviving a brutal battle during the War of 1812. It remained intact, waving proudly amidst the turmoil, giving hope and speaking of bravery and endurance.

And that’s how I felt as we sang in the hot, midday sun. That we as a community had endured so much turmoil and discrimination, merely because of who we love. Yet we had only grown stronger, given greater visibility and resolve by the glaring rockets and bursting bombs all around us: Stonewall. Harvey Milk. AIDS. Matthew Shepard. Westboro Baptist Church. The countless victims of rejection, bullying, excommunication, suicide and murder.

As we neared the end, I choked up, unable to sing. My heart filled with pride for my country, my community, my chorus brothers, my family. My thoughts filled with anticipation and relief and immense patriotism. My eyes filled with a mixture of sweat and tears.

We finished the song, and I hugged several of the guys and took a few more pictures to capture the day. But it was a swampy summer afternoon in Washington, and I’d had enough. I walked back across the street to hail another taxi for an impromptu trip to my husband’s office. I wanted to share and celebrate the moment with him before heading back to work myself.

As I cooled down in the air-conditioned cab, my thoughts went to the pile of work I had waiting for me, and the fatherly work after that feeding, bathing and putting my son to bed. I thought to myself how much time it had taken out of my day, traveling by subway and cab and on foot, the time it was going to take me to get home and the unavoidable stress… but then I stopped myself. I had experienced the struggle of gay Americans in a microcosm that day. Working so hard, traveling far, enduring the searing heat, then one moment of communal triumph… then back to work.

Time to get back to work and family, and all the day-to-day things that make up my life. The only difference was that my relationship and my family were now just as protected and supported as every other American… and that made all the difference.

The reception of our performance has been pretty astounding. It has been featured on PBS NewsHour, The Washington Post, Business Insider, NPR, MSNBC and most local news stations. Oh yeah, and even Glenn Beck’s web site. If you saw/heard it anywhere else, send me the link and I’ll add it to this list.

If you’re on Facebook, you can view my photo album from the performances here.

(P.S. That’s me in the yellow Superman visor, far left.)

9 responses to “A Gay Man’s Moment of Patriotism”