Rolling With My Homies: The 2013 White House Easter Egg Roll

I’m about a week behind on life (checking calendar… make that two weeks), so pardon the untimeliness of this post. However, I couldn’t NOT document it for JJ — and for myself, as I am getting older and more forgetful. Plus, have you ever actually met anyone who’s been to the White House Easter Egg Roll? I hadn’t, so thought sharing a bit of our eggsperience might be eggciting* for you.

The White House Easter Egg Roll (henceforth, The WHEER) is one of those things you grow up knowing about — especially around these parts — but never imagining you’d go to. I even remember a few years ago hearing about same-sex parent families attending, and that it was kind of a big deal. But again, I never thought I’d end up at this DC Bucket List-worthy shindig.

But out of the blue, a few days before The WHEER, I got an email from a friend offering us some tickets! He’s got major Obama connections and had taken his nieces last year; but he thought of our family this year. [Thanks RyRo!] Needless to say, we hopped at the chance!

I won’t go into too much minutia — I wouldn’t want to ruin it for anybunny with dreams of going themselves some year… But hare are the highlights:
. 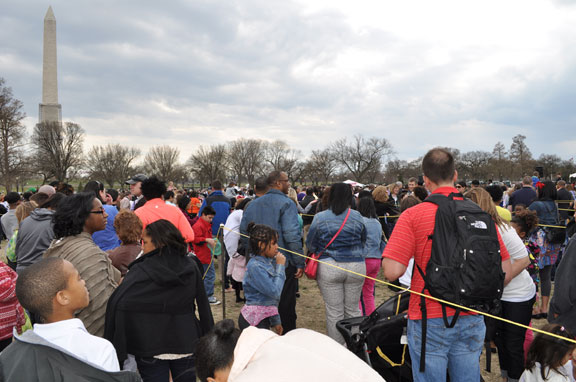 The throng waiting in eggticipation. It started out overcast, and was drizzling about the last 1/2 hour we were in line. Papa also tried to teach JJ to say “obelisk.” I commented to a woman next to us, wondering aloud how many of these kids were going to be sick the next day. Despite all this, it was a surprisingly well-behaved horde.
. 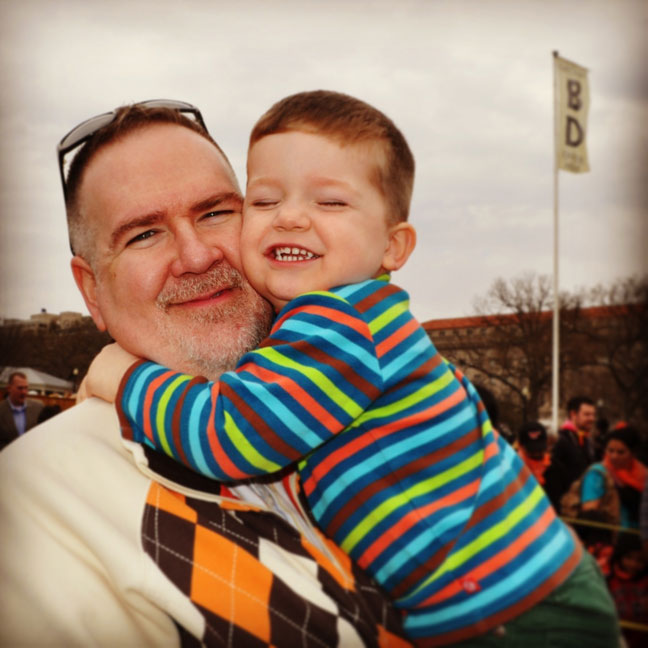 Papa and I took turns holding JJ, as he’s a runner. Hare’s a huggy photo I’m particularly fond of.
. 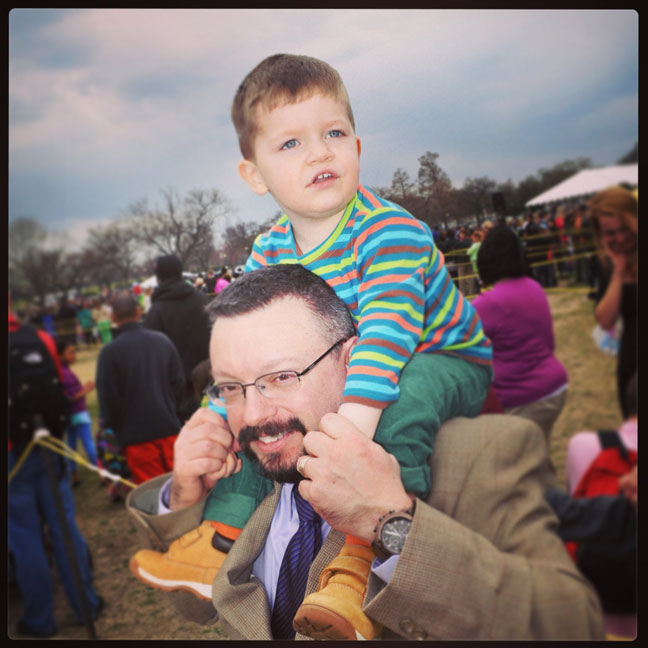 JJ perched atop Papa, who was a real trooper and walked from work in the chilly wind, all the while sporting his Eastery best. Note the lavender shirt and purple tie. Designer Daddy done taught him good. 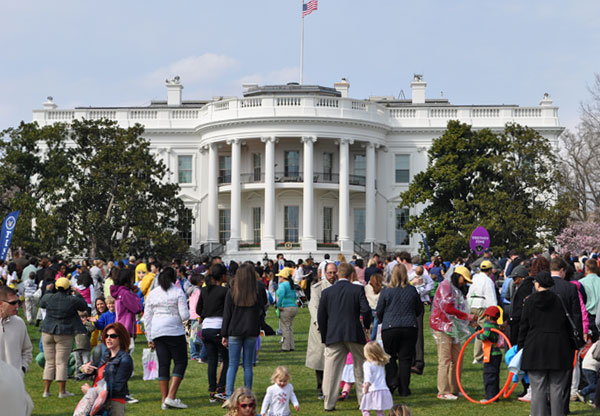 I’d always envisioned the WHEER like the end of Steel Magnolias: a few families scattered over a rolling hill in the town park… not so much. Although I could have sworn I saw a bunny on a motorcycle.
. 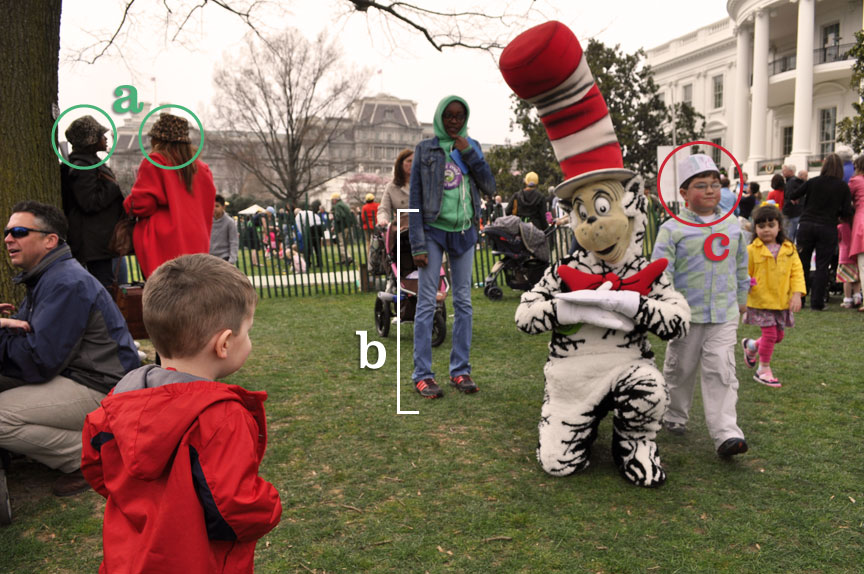 While JJ was initially eggcited to see The Cat in the Hat (one of many “real people” — as JJ referred to them — roaming the Lawn), as it got to be his turn, his masklophobia** kicked in and he opted out. Or perhaps he was freaked out by a) the two women with leopards on their heads, b) the young lady made almost entirely of legs, or c) the lad with the bucket on his head. And what exactly is Cat doing with his hands? Throwing gang signs? Making the international hand signal for “I’m making a little boy sandwich out of you”? JJ did not like him, he did not like that. JJ did not care for The Cat in The Hat.
. 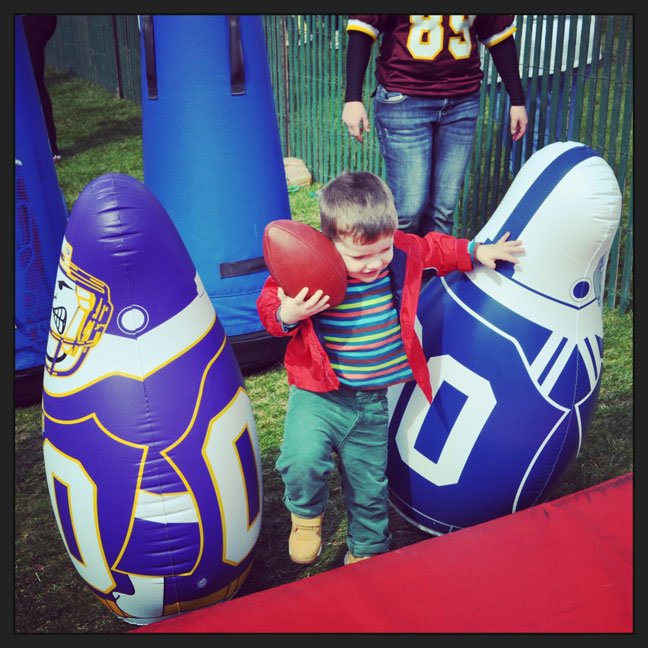 The first (and second) activity we did was the football obstacle course, manned (womaned, rather) by some Washington Redskins-related ladies (they weren’t cheerleaders). JJ was a natural, weaving between cones, jumping over stuff, busting through the inflatable Colts and Vikings players. Maybe we should set up a course at home on the way to the bathtub.
. 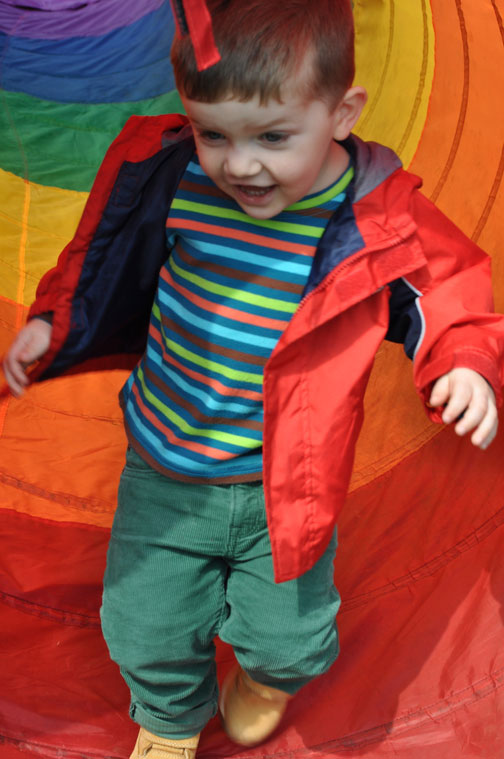 The course was pretty popular, and populated — so the second time JJ went through I waited at the end, then ran up and got this mostly accidental shot of him running through the rainbow tunnel. You can’t get a more joyful expression than this! 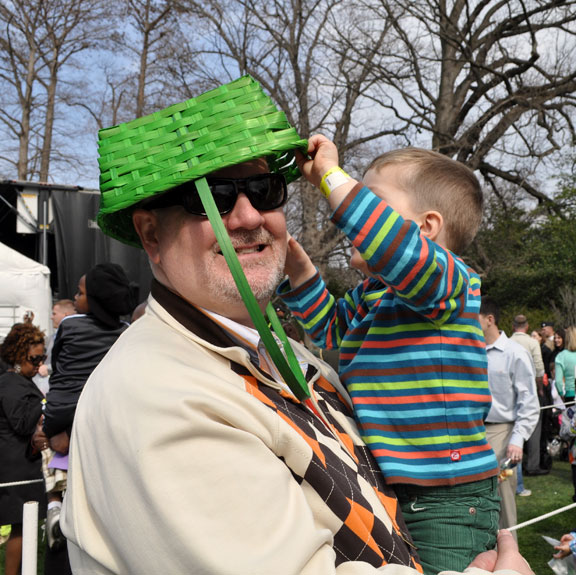 Another activity, another line. We’re holding JJ now because he’s “too tiyuhd” (and because he’s still a runner). More time-killing and tomfoolery. Whaddayathink? Egg head or basket case?
. 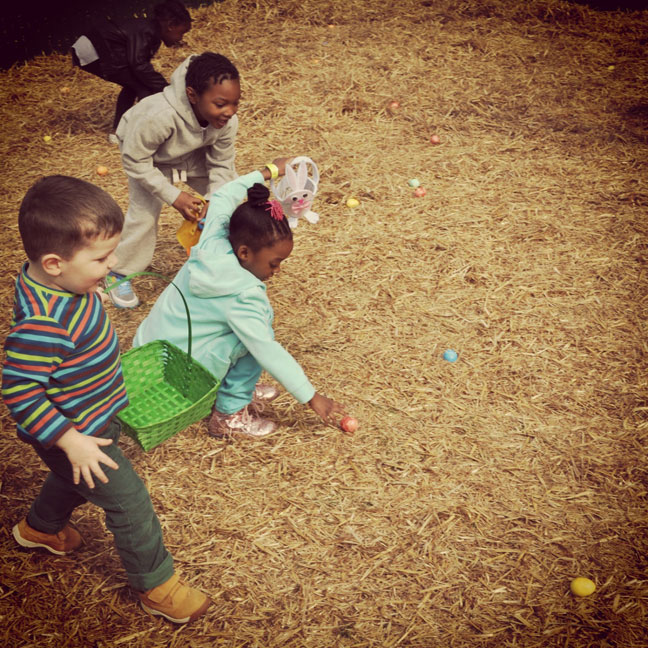 And they’re off! The Egg Hunt was a couple of pens (seriously, a fenced-in area and bales of hay) where they threw out eggs and let the urchins go wild. Another thing he did twice. JJ was happy as a pig in, well, a pen.
. 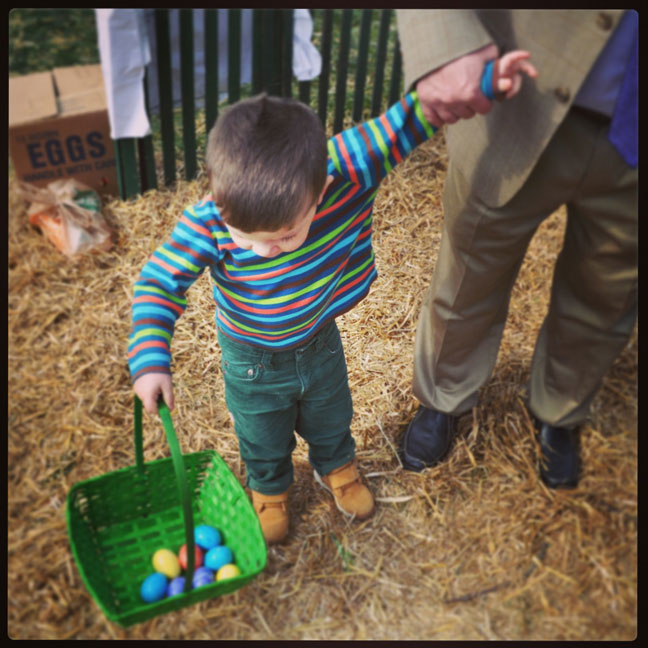 On the second hunting trip, JJ learned the secret to greater bunny booty. He stayed to the bitter end, until they’d shooed away the previous kids and started tossing out eggs for the next bunch. Which JJ quickly started snatching. Papa herded him out of there before he’d collected too many, and gotten us put on the CIA’s Most Wanted list.
. 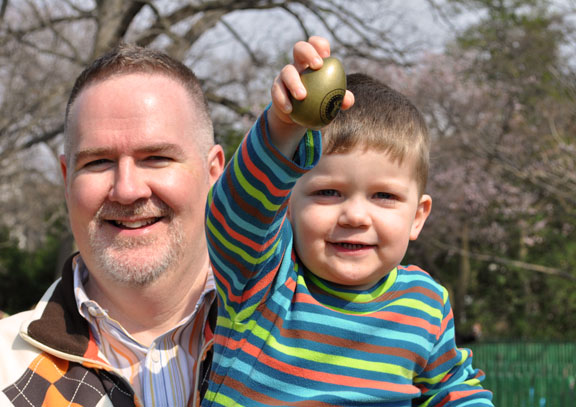 The Golden Egg! This coveted prize did NOT get us an exclusive White House tour or audience with Bo. All we got was an extra jump rope. They don’t call this Easter Fat Camp for nothing. 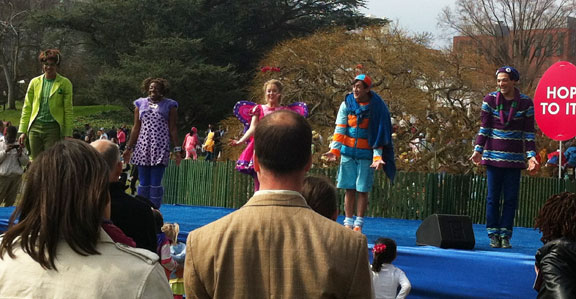 As you may have noticed, we didn’t actually get to the actual roll part. In addition to the Egg Roll and what I’ve shown you, there were also cooking demos, people handing out fresh fruit, an exhibit on honey bees, a reading area (where celebrities read to the kids), and probably quite a bit more I’m forgetting. There were also music acts performing on a couple of stages. A large stage featured the likes of The Wanted and a bunch of other tween groups I’ve never heard of. On the kiddie stage were these folks dressed like bugs. I thought the guy’s blue/orange vest was cool. But the pink butterfly chick was shrill and “too yowd” so we moved on. 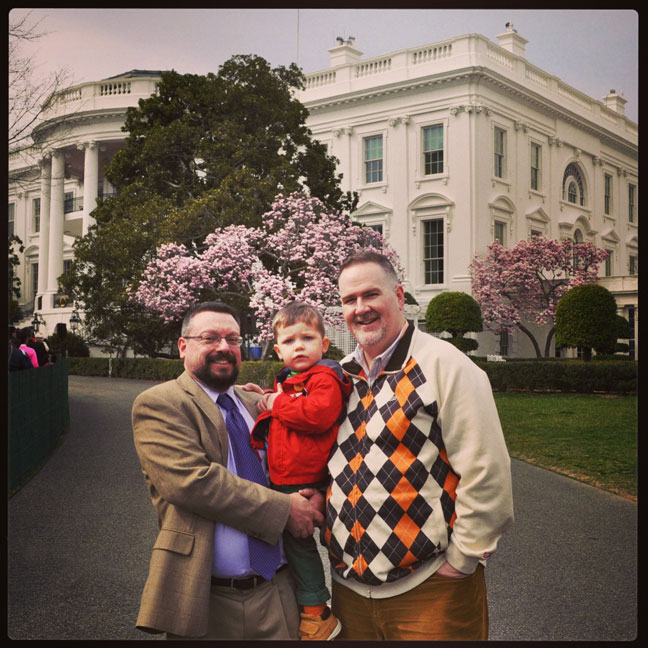 A gay couple visiting from San Diego took our family photo (and we returned the favor). This would make a great Christmas photo, if not for JJ’s bemused expression. And the fact that we’re dreadfully non-matching. 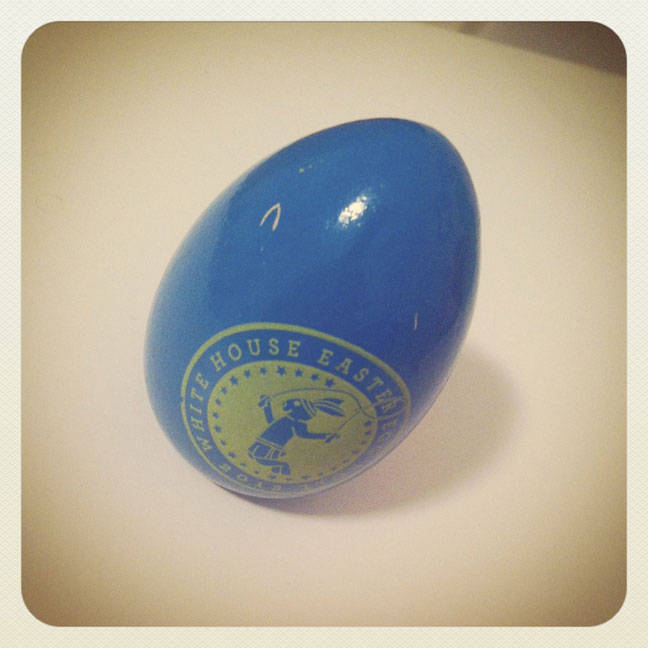 As we eggxited The White House grounds, we were given quite a few goodies. Among them were goldfish (the crunchy kind, not the swimmy kind), Peeps (must have gotten out under Michelle’s radar), and this commemorative wooden egg. On the front is the WHEER logo (a bunny hop-roping) and on the back are the signatures of the President and First Lady. What are those white scratches, you ask? Teeth marks. JJ was convinced there was candy inside, and darned if he wasn’t gonna crack it open!

*Did you find all the Easter/egg/bunny-related puns? Big hops to the first person who gives the correct number in the comments!

**JJ’s probably still scarred from his run-in with George at his first Nationals game. It’s hard to tell, but he’s NOT in a patriotic mood.

3 responses to “Rolling With My Homies: The 2013 White House Easter Egg Roll”