Am I a Helicopter Parent? 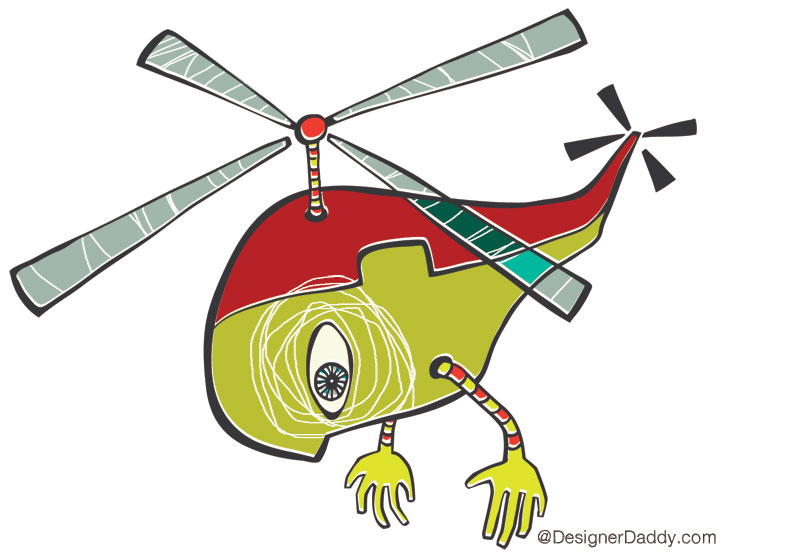 Helicopter Parenting: it’s totally annoying to hear about, yet I fear I may be one myself.
I’m a bit of a worrier anyway, and being a dad of a toddler has me spinning pretty closely sometimes, especially when it comes to impending crashes. I hope I’m not enough of a psycho, though, to call my son’s potential employers when he’s applying for his first job.

Sounds extreme, I know. But it’s not unheard of.

Last year NPR published an article about Michigan State University, where they polled 700+ employers looking to hire recent college grads. The survey found almost one-third reported parents submitting resumes on their child’s behalf, some without their knowledge. One-quarter were contacted directly by the parents, urging them to hire their child.

I’ll admit my mother proofread (and edited) my college application. She’s an English professor — I would have been stupid not to enlist her help. Yet it was my own thoughts that made it onto the page. And I don’t recall my parents ever being involved in any of my job applications or interviews. I imagine employers would not only think, “Wow, what kind of candy-ass needs their mom to get them a job?” but also, “Yikes. How do I know this crazy parent won’t hunt me down if I ever have to fire their kid?”

Perhaps the most jarring example of Heli-Parenting came to light recently when 21-year-old Aubrey Ireland won a restraining order against her parents, who she claimed were essentially stalking her every move while at college. Ireland’s parents had accused her of promiscuity, drug use and mental illness, and had gone so far as to install spyware on her laptop and cell phone to track her 24/7. In response, they claim Aubrey is a top-notch actor and liar. How sweet.

Aubrey was an only child with very involved parents from the get-go, enrolling her in softball, basketball, soccer, volleyball, tennis, piano, dance and voice lessons. She could probably spell “overachiever” in the womb. Who knows when the over-involvement began, or who’s telling the truth now – but it sounds more than a little like one or both parties are positioning themselves for a reality show.

Regardless of this particular family’s intentions, it’s no secret that parents are involved in their kids’ lives now more than ever. Much has been written about Millennials coming of age and being closely shepherded through the competitive university or job application process.

Eric Petersen, Manager of Diversity & Inclusion at the Society for Human Resource Management, shares some of his insight: “It’s not that previous generations of parents didn’t take an active interest in their children, but this crop of parents spend a lot more time coming to their children’s defense. It starts with teachers and coaches, and for some parents, bosses and supervisors as their children enter the workforce.”

And what about those of us with small kids still at home? Are we already on the road to Helicoptering?

My son is only 3, but I do wonder if I hover too closely at times. JJ is such an adventurous kid – jumping, climbing and running everywhere. And whether he’s playing superheroes or robots or dinosaurs, he calls the shots, assigns the parts and plans the action. We’re talking confidence to spare.

I think a lot of us are scared in ways and about things our parents didn’t have to deal with. “Don’t talk to strangers” and “Look both ways before crossing the street” don’t cut it in a world where kindergartners are gunned down in their classrooms.

“Stories like the recent tragedy in Newtown, CT only reinforce a culturally imposed tendency to hover above our children and offer them whatever protection we possibly can,” adds Petersen. “Helicopter parents are not willfully living vicariously through their children, nor do they wish their kids to be dependent on others their entire lives; they’re just doing the best they can.”

Yet being a parent is also a joy…and sometimes even a thrill-ride. I genuinely look forward to JJ being involved in sports, being popular and outgoing — putting himself out into the world. And I look forward to not just encouraging him, but standing back and letting him choose his own path. (Except for football — outgoing is one thing, head trauma is a whole ‘nother ball game.) I’ll do my best to enjoy his adventures vicariously, without trying to make them my own. Being a dad is my adventure —the delight (and sometimes dread) of watching your child grow up.

Have any of you ever displayed any Helicopter Parent qualities? Seen (or done) any extreme Heli-Parenting you want to share? Been the recipient of it?

(PS: Mom, what did you think of my article? Anything to add? And can you please proofread while you’re at it? Love, Brent)

This article originally appeared on Mamapedia.com. I added the doodle and a couple of extra quotes from my very helpful HR resource and friend, Eric Petersen.

4 responses to “Am I a Helicopter Parent?”