On a recent Thursday I saw a post on Facebook from fellow dad blogger Oren Miller, saying he would be meeting with the governor of Maryland, thus was soliciting questions from fellow Marylanders to take with him. He mentioned he was part of a group of parent bloggers the Governor’s office had invited for an informal Q&A regarding issues important to Maryland families. My immediate question – of course – was, “Do you have a gay parent blogger yet?” Oren, being the connected and generous fellow that he is, passed along my info which resulted in an official invite for the meeting…which was happening the very next day.

Giddy as all get-out, I quickly scrambled around, emailing, Facebooking and Tweeting (even LinkedIn-ing, I think) to get questions from friends and blog readers to take with me to Annapolis…so I wouldn’t look like a completely uninformed dolt. I ended up with a decent number, and narrowed it down to three priority questions to ask. I knew in a room full of bloggers my chances at getting a word in might be slim.

The next morning I sped through the nasty, wet traffic the nearly hour drive to Annapolis, eventually found parking, and trudged up the hill to the State House. Our meeting was in the Governor’s Reception Room — think the White House’s Roosevelt Room, only higher ceilings and more portraits of Maryland Governors. Our group consisted of 8 bloggers (5 moms, 3 dads), Governor O’Malley, and a few staffers. 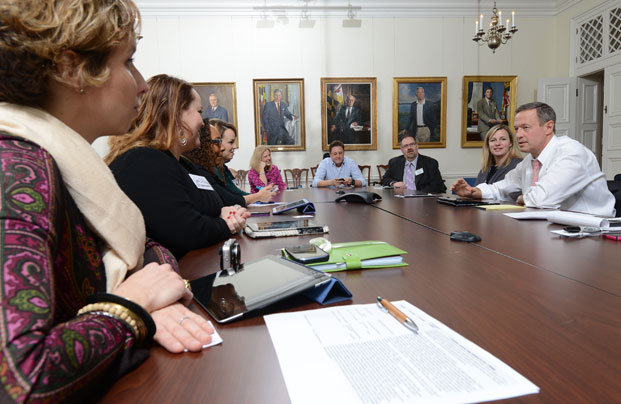 The other guys in the group ribbed me for wearing a coat and tie and making them look bad. But in my research the night before, I’d been informed that O’Malley was not only the Governor of Maryland (home to the very recent Super Bowl Champion Baltimore Ravens) but also a graduate of Gonzaga High School in DC. So my tie and my socks were purple (Designer Daddy’s got a rep to uphold) and I made sure to point that out when introducing myself to the Gov. I realized soon after though, that I was the only person NOT to specifically mention my child and how old he was. Smooth, huh?

The meeting was fairly informal, with Governor O’Malley talking a bit about the goals of the remainder of his term (which ends in 2014), using a projection of the office’s web site to illustrate certain points and show how citizens can keep track of the state’s goals and review progress in real time. 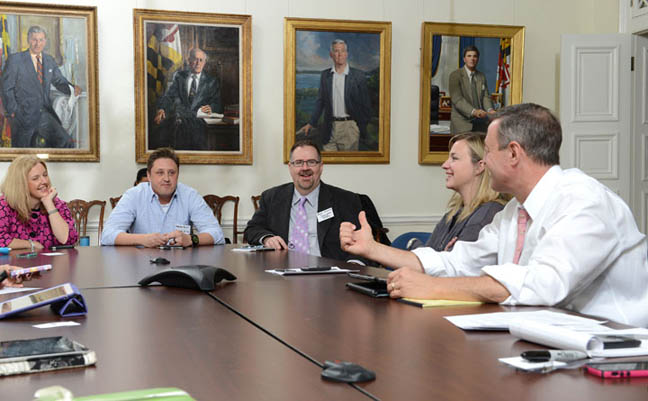 “Get a load of this guy in the purple tie.”

Not surprisingly, the first blogger question was about education, as were many that followed. Education-related discussions included the quality of public schools vs. private; school meal programs and the overall issue of hunger; and the lack of mental health providers, among others. The issue of mental health inevitably led to the topic of gun control, at which point I was able to mention one of the questions on my list.

A store near our house sells toy trains and guns. It’s always seemed odd disturbing to me (and many others) to have a gun shop so near residential areas, within walking distance of several parks and schools. It was even broken into a few years ago — apparently the thieves weren’t into toy trains, as only guns were taken. I mentioned all this to the Governor in order to say, “I don’t know what the zoning laws are for gun shops, but it shouldn’t be on the way to walking my son to the park or preschool.”

My comment wasn’t addressed directly, but the topic of gun control was discussed in general. And in a follow up email we were invited to a rally in support of his Gun Violence Prevention Bill on March 1. Information on this bill and the rally are listed at the end of this post under Resources. 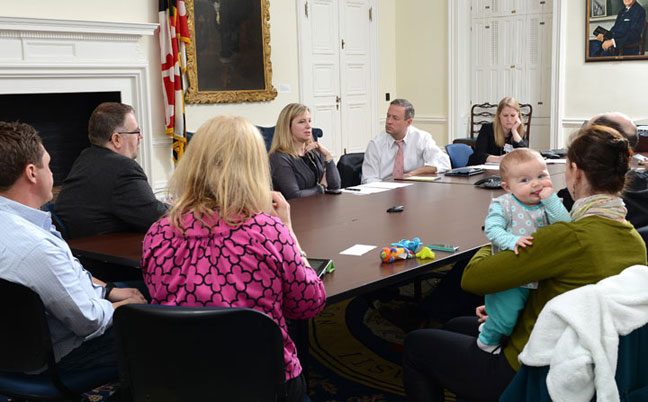 Our meeting was only an hour long, and by the time I’d gotten out one of my three points, we were already nearing the end. So at the close when the Governor asked if there were any further questions, I threw a Hail Mary to get in the comment I’d most wanted to:

“I just wanted to personally thank you. My partner and I moved to Maryland nine years ago, A) so we could afford to buy a house and because of the schools, and B) so we could adopt. I wanted to thank you for your support of the Same Sex Marriage Bill. It’s not a political issue for us; it’s our life, our family. We have a 3-year-old son, and I was excited the morning after the election to tell him that [his Daddy and Papa] were going to get married. He didn’t really understand what ‘ring bearer’ meant (laughter) — he thought it meant he was going to get to ring a bell. And I think since we already have rings, we’re just going to let him ring a big bell or something.” (More laughter)

(Pause) “So do you do weddings?” (More laughter)

Governor O’Malley’s reply, “I’ve never done a wedding. Technically I guess I’m allowed. I’ve never gone down that path, for fear that if I did one it would be impossible for me to justify saying no.” (Laughter)

He continued, “I think we found a broader way to communicate around that issue, by talking about the dignity of every child’s home. And I don’t think any of us agrees that’s it’s right or just that one child’s home would have lesser protections under the law than another child’s home depending on who their parents were.”

And with that, we wrapped things up, got a group photo in the Governor’s office, and said our final “thank yous” and goodbyes. As I was shaking O’Malley’s hand, I told him I’d mentioned to JJ the night before that I was going to meet the Governor, which didn’t register. I told him he was the President of Maryland, which seemed to impress him a bit. O’Malley got a chuckle out of that, then encouraged me to “Keep Kensington strong.” A very politician thing to say, but not a bad admonishment. 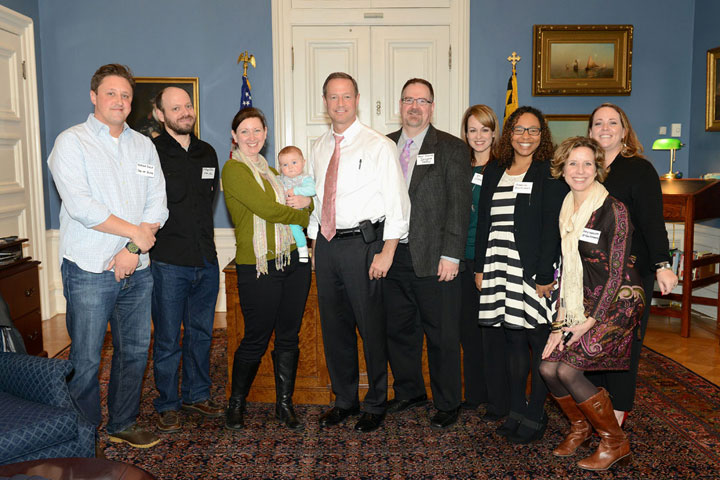 I realize this post isn’t very meaty with policy details. One thing I learned from this experience is that real politics — not the issues-driven sound bites that fuel most election year debates, but the statistics, dollars and logistics — boggles and numbs my mind. I have new appreciation for elected officials and those that work for and lobby them.

However, I did email all my questions to the Governor’s office. I’ll be sure and send answers to those that asked, as well as to anyone else who’d like to read them — just say so in the comments or a direct message. I’ve also included a Resources list below: links and documents provided by O’Malley’s office in reference to several of the topics we discussed in our meeting.

While there’s still much to be done to improve education and decrease hunger and gun violence, I came away from this experience hopeful for my state and the country as a whole. I was proud to have been able to thank the highest person in power that helped bring about marriage equality, and thrilled to have this as part of our family’s story. I imagine this will be one of those tales my son will grow weary of hearing as he (and I) grows older. Designer Daddy Goes to Annapolis

My original intent on bringing up the Same Sex Marriage Bill was not only to thank the Governor for his support of it, but also to ask if there was something that had personally inspired him to be such a strong proponent on such a divisive and provocative issue. I never got to ask, but in researching afterwards I came across his bio on Wikipedia, and I think I found my answer… 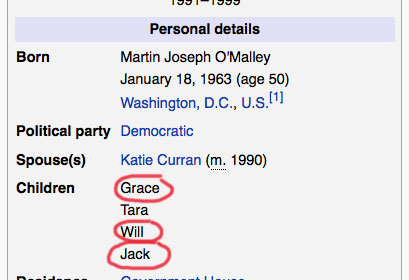 Governor O’Malley is apparently a HUGE “Will & Grace” fan.
(Although I’m not sure what he’s got against Karen…)