After tallying up all your cluckety-clicks, it looks like I’ll be donating $179 to Marylanders for Marriage Equality! If you’ve got a minute and few bucks, would you consider making a donation yourself to help MD4ME push this through? Our governor has signed a bill approving same-sex marriage, but enough opposition signatures were gathered to get a referendum on the ballot in November. So the day before JJ’s third birthday, Marylanders will be voting on whether or not his dads can be legally married. We could really use your help. I can’t promise you a wedding invite, but I can promise you the reception won’t be serving chicken sandwiches. 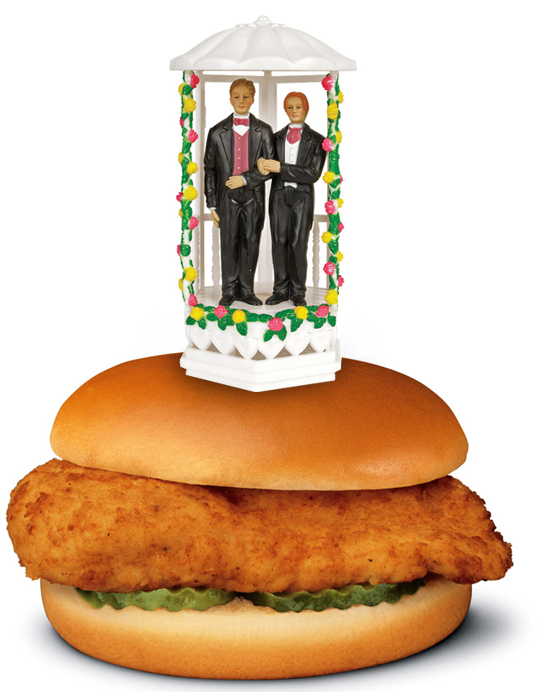 Bet let’s move on from the chicken nonsense. If you’re anything like me, you’re tired of hearing about and/or participating in this debate, and have completely lost your appetite for poultry for the foreseeable future. So I defer to the sage of our times to deliver the epilogue…

As Jon Stewart so eloquently (and snarkily, natch) summed it up:
“For people who are gay or support gay marriage, I get how seeing thousands of people come out to make this statement is incredibly disheartening. But take solace in this: gay marriage is happening. Like many drive-thru window lanes, it ain’t going backwards. And your bonus is this — you get gay marriage. And all your political opponents are going to get is type 2 diabetes.”