Making Waves! or How I Got a Major Toy Company to Do My Bidding 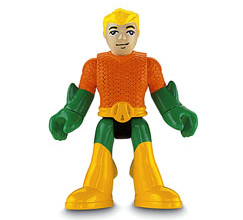 I’ve been buying the Fisher-Price Imaginext DC action figures for JJ for a while now. I will be the first to admit I get as big a kick (or bigger) out of them as he does. Although he DOES love them — he carts them around in a little bee lunch bag thing, takes them out and lines them up, has them fight each other, forms alliances and families, etc. And as with all things Fisher-Price, they’re super sturdy and cute as hell. (I’m a FP fan from waaaaayyy back.)

But my gripe with these toys is that they didn’t include an Aquaman figure. And anyone who knows me well realizes what a big gripe this would be. To add insult to injury, Marvel has an equally adorable (and similarly-sized) line of action figures, many of which I’ve bought for JJ as well. I grew up almost exclusively on DC Comics, but I’ve bitten the bullet for an opportunity to teach my son diplomacy and bi-partisanship. And did I mention the cuteness? 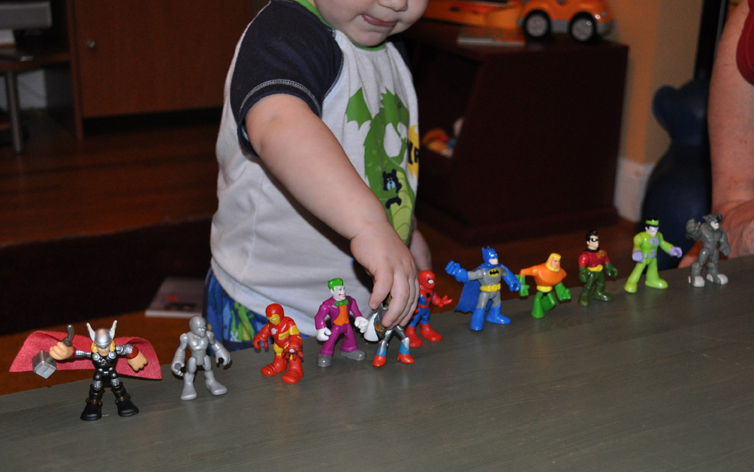 DC and Marvel in peaceful co-existence

I did find an Aquaman (and Wonder Woman) that are almost the same size. However they’re not as posable and can barely stand. JJ repeatedly gets frustrated and either asks yells at me to help or just chucks them on the floor. 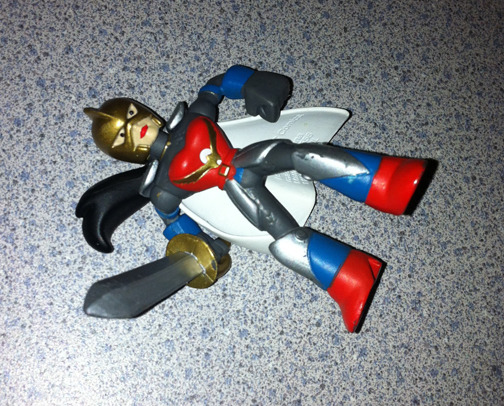 So in my frustration obsession I poked around and discovered you can suggest toys to Fisher-Price — and I was pleasantly surprised to find I wasn’t the first to complain about the lack of Aqua-presence (or Wonder Woman/general female presence) in this particular line. So I went ahead and created an official “My FP Ideas” page for both an Aquaman and Wonder Woman figure, then rallied my friends over at The Aquaman Shrine. They in turn encouraged quite a few others to add to my request in hopes that our voices would be heard. I felt satisfied I’d done all I could, but wasn’t particularly hopeful.

Fast-forward a couple of months… The other night I went on the Fisher-Price site to use a coupon for some early birthday shopping for JJ, and Atlantis be Praised! — there was the Aquaman figure, all shiny and cute and orange/green/gold*… and for sale! JJ will have to wait a couple more months to play with the Bat Cave I bought him, but he’ll be kicking bad guy butt with his new Aquaman in 5-8 business days! And yes, so will Daddy. 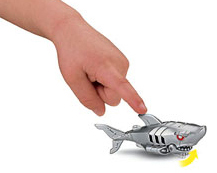 If you’ve read this far, you must either be a fellow Aquaman fan, or are intrigued by my level of geekiness. Either way, I do feel proud — if not a bit delusional — in having contributed to this figure being produced, and thus my son (and me) having a super cute Aquaman to battle alongside Supes and Spidey. Someday when JJ’s a rebellious teenager, complaining how I never did anything for him, I’ll just direct him to this post.

*So my only complaint about the new figure (and I have to complain, it’s what us comics fans do) is that Aquaman has YELLOW boots. He’s never had yellow boots. Ever. And Aquaman has had his fair share of costume changes over the years (black briefs/green tights, no briefs/green tights, long hair/beard/no hand, hook for a hand, water for a hand, blue costume, even yellow GLOVES) so I’m not sure where this came from. I do, however, like the nifty Robo Shark. The caption on the site says, “Press fin down for chomping action!” I kinda like that he comes with a shark — it’s more badass than Aquaman’s previous fishy sidekicks, which included Topo the Octopus and Storm the Seahorse.

4 responses to “Making Waves! or How I Got a Major Toy Company to Do My Bidding”