I’m Super, Thanks for Asking! or Why Gay Superheroes Matter 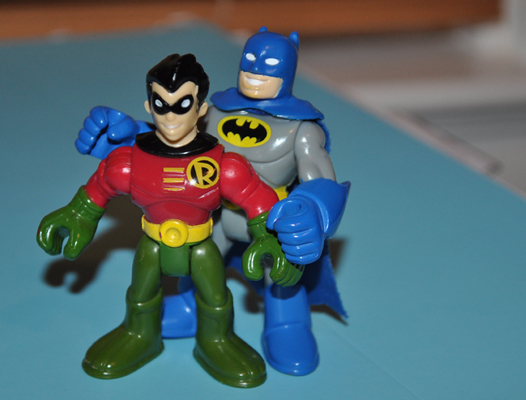 The last time I heard this joke, I fell off my dinosaur laughing…

Gay comic book characters seem to be coming out in full force these days. DC Comics revealed last week that they’d be re-imagining one of their established heroes as gay in the near future; Marvel will feature a wedding on June 20th between one of its X-Men and his non-mutant boyfriend; and Archie Comics’ first gay character Kevin Keller got hitched to his BF in January. While gay and lesbian characters have existed in comics for a couple of decades, this recent batch of outings seems to be garnering more attention due to their close proximity to President Obama’s public support of same-sex marriage. As a gay man, a father, and a comic book fan, I couldn’t be more excited about the worlds (both real and imaginary) JJ’s growing up in! 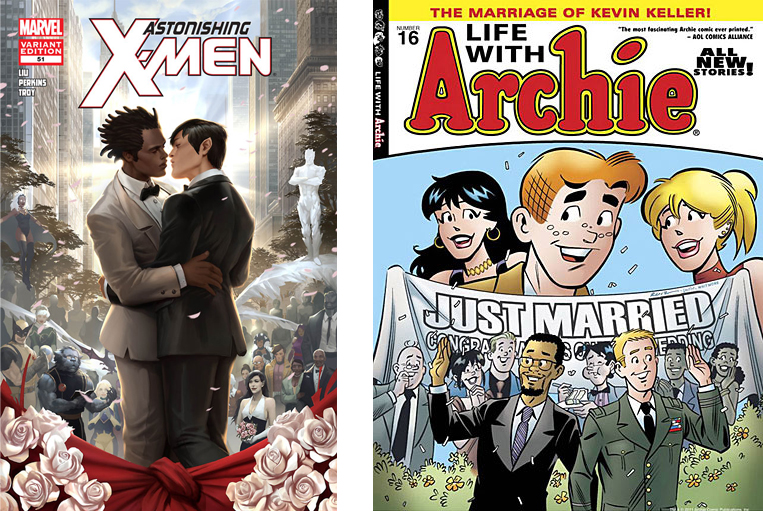 Same-sex marriages are popping up in Marvel and Archie comics.

However, it’s been frustrating to see some of the reactions these stories have elicited. Of course there are the detractors, boycotters and general poopheads who think all of this is inappropriate, overly political or just plain icky. This post isn’t about them. What bothers me are the comments I’ve seen either A) griping that it’s all a publicity stunt or B) asking with superior indifference, “Who cares? It’s just a comic book.”

Okay, so A) yes, these comics are obviously trying to create buzz and increase sales. The current CEO of Archie Comics admitted as much in a recent article in The Washington Post. The same article quotes the editor of Marvel’s Astonishing X-Men as saying the gay-related storyline evolved from the legalization of same-sex marriage in New York last year, and is an attempt to keep Marvel on the cutting-edge. DC pulled a whopper of a publicity stunt in September with a company-wide reboot of all its books and characters, even resetting iconic titles like Action Comics and Detective Comics back to #1 (they were in the 900’s and 800’s, respectively). This also created the perfect opportunity to rewrite the sexual orientation of a well-known hero. Who am I to complain if a little opportunism brings out, proud (and married) a little further into the mainstream?

As to B)… I agree there are more pressing matters in the world. However, my son is not yet 3 years old and he’s going to have plenty of time to learn about the hardships and heaviness of life. But for now, I’m trying to instill — rather successfully, I might add — my love of superheroes and comics to him. To his toddlery brain, the day’s biggest concerns are pancakes, his new swing set, and playing with/watching/dressing up as superheroes. And being that JJ has two dads, it would thrill me to no end for him to grow up having even a few examples of gay heroes or same sex couples in the comics universe. Because they’ve yet to show up on Sesame Street, Dora or Yo Gabba Gabba. And before someone else says it, those shows would do well to have gay characters. There are numerous examples of married couples, “hetero” animal parents, and mommy/daddy combos on pretty much every kids’ show out there. Hey Diego, I’m sure there’s a baby penguin needing to be reunited with his two dads somewhere… just saying.

So, Mr. So-Above-It-All Commenter, to answer your question: I care. I don’t care who the new gay character will be, just that there is one. Unless it’s The Joker — poor Robin would never hear the end of it.

WHO WILL BE THE NEXT GAY SUPERHERO?

So who do I think the gay DC character will be? I’ve read quite a few articles on the subject, and you can tell which were written by non-comics fans. Their speculations have been both obvious (Aquaman is married folks, even in the reboot) and misinformed (the current version of Robin is Batman’s son, so… ick.) It’s looking like it will be someone from Earth 2. They’ve just started to bring those characters into the reboot, and it seems the previously senior members of the DC Universe are now spry, young things. So why not have one of them switch teams as well? All signs are pointing to Alan Scott (the original Green Lantern). His one brief appearance so far (he’s yet to don any super-powered jewelry) shows him as a hunky, jet-setting tycoon, trading sassy banter with his female assistant. Plus, it will make for juicy headlines: “Green Lantern Now Gay!” Green Lantern’s name is fairly recognizable, and the casual reader won’t get past the headline to realize it’s not the same character Ryan Reynolds played in the not-so-stellar GL movie, making the news not as earth-shattering as it sounds. After all, it is just a comic book. 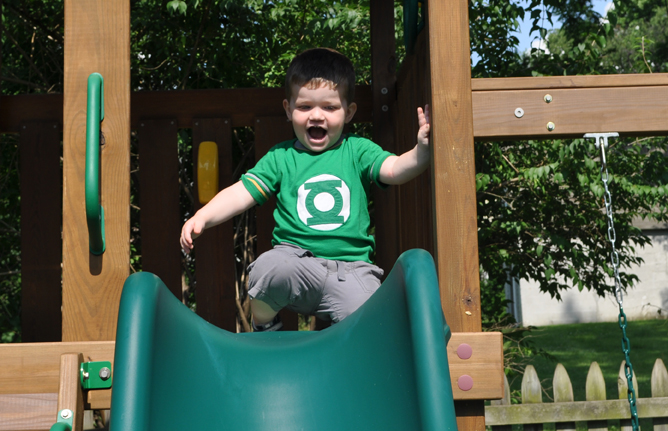 7 responses to “I’m Super, Thanks for Asking! or Why Gay Superheroes Matter”