If you’re wondering “Who the heck is Dicken Schrader?” you’ve obviously not seen this video:

That’s Dicken (a video producer from Bogotá, Colombia) with his kids Milah and Korben — also known as DMK — rocking one of their three Depeche Mode covers. I’m a lifelong Depeche Mode fan (as is Papa) and the night I came across this video we sat in bed watching and laughing so hard at how incredible it was. In addition to being amazed by the video’s cleverness and creativity, I was equally intimidated by this dad’s dedication to raising some seriously talented offspring. Dude has set the bar seriously high. I hunted Dicken down and he generously agreed to do a DDQ&A about all things DMK.

Tell me briefly about how DMK got started.
It just happened very naturally. My kids grew up listening to whatever I listen to, a lot of it being Depeche Mode and other electronic music. They really get into the melodies and love trying to emulate them on our keyboard. When we did our first video, “Shake the Disease,” we never thought we would do more than one, but the kids loved doing it and we just kept on going. 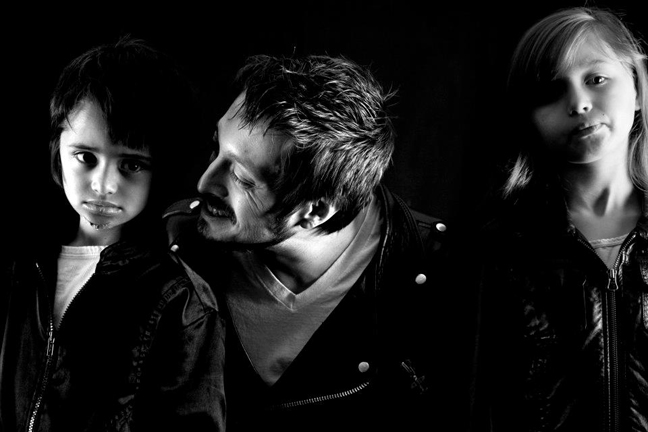 Why Depeche Mode?
Depeche Mode is my all-time favorite band since I was in high school. It was the band that really got me into music and it has been the soundtrack of my life ever since. 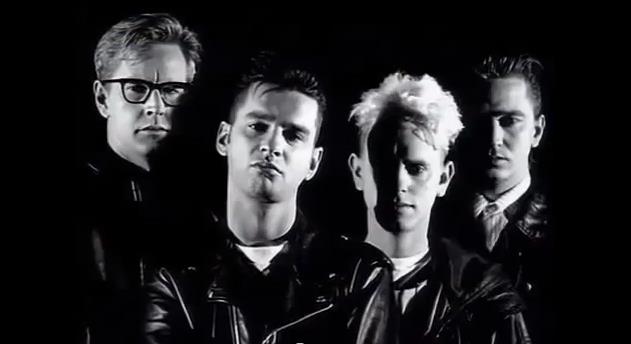 Looking chronologically at the 3 videos you’ve done, it’s great to see the increased involvement and musical skill of the kids. How old are Milah and Korben, and how do each of them contribute to DMK?
The kids are getting better and better with each video — their musical abilities growing steady. Milah is 8, loves to play the recorder and is about to take up flute. She’s very responsible and helps me keep Korben in line when we’re practicing. Korben, 5, is a little keyboard virtuoso and is amazing at keeping a beat. He’s also the diva of the band, the one most likely to throw a fit in the studio.

Tell me a little about the process of making the videos.
These are not live performances. They are videos of music we have pre-recorded in our studio, our master bathroom — it has great acoustics. The instruments that you hear, however, are played by who you see playing them in the videos. But remember I’m working with kids, one of them being 5 years old. I can’t submit them to the torture of recording a hundred takes. After the sixth one they are exhausted, and there are not enough scoops of ice cream to persuade them into doing ten takes. I have to simplify, so there is some pre-recording that has to be done.

What inspired your choice to use the homemade instruments in the videos?
Necessity is the mother of invention. And also, I think the originality of our musical philosophy lies in the fact that music can be done with anything, by anyone. Even by five-year-olds scratching on a cheese grater. 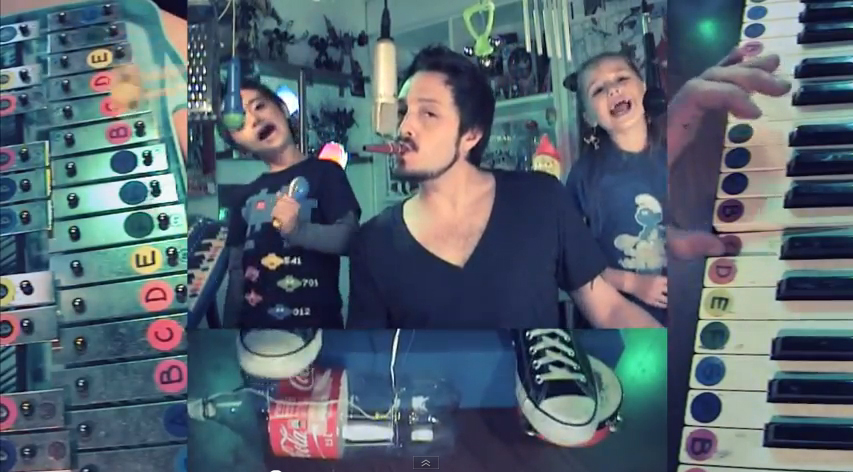 You posted “Everything Counts” in July 2011. Do you know what sparked its more recent popularity?
I honestly don’t know. All I know is that on the weekend of January 28th it appeared simultaneously in CBS news, the Huffington Post, Wired, The Guardian, and many blogs and Tumblrs. After that, it immediately went viral and in a few days it went from fifty thousand hits to a million.

Did this newfound fame inspire you to become DMK? Did the kids help you with the name?
Of course. We needed something shorter than Dicken featuring Milah and Korben, which was the name we were using before our internet boom. DMK just came naturally. The kids loved the fact that our band name is our initials and could mean something like “Depeche Mode Kovers” or “Depeche Mode Kids.”

Have you heard from Depeche Mode?
I know that Vince Clarke, one of Depeche Mode’s founding members, is following us on Twitter. But we haven’t heard from the current members… yet. If one day we do — as I hope we will — it will be a pinnacle in my life, a day in which I will accomplish the task of getting noticed by people I truly admire.

What’s next on DMK’s playlist?
We have a lot of Depeche Mode songs on queue, just waiting to be covered. “Just Can’t Get Enough” is definitely one of them, along with “But Not Tonight,” “Enjoy The Silence” and “The Meaning Of Love.” We’re currently rehearsing our fourth cover, which we plan to release sometime in June. All I can say is it will be a very unexpected DM song.

Have you gotten any crazy offers since your success?
The most outrageous proposal we’ve received so far is to play live in a music festival in Kazakhstan, all expenses paid. We seem to be very popular in the former Soviet Union. But we need to start smaller than that. I don’t want to put Korben on a stage in front of thousands of people… not just yet.

I read that you used to work at Vh1 — what were some of the projects you worked on there?
I started my career producing on-air advertising for cable channels. First for Latin American channels based in Miami like MTV Latino, HTV and AXN Latin America. Then I moved to New York to work at Vh1 U.S.A, initially as a writer/producer and then as Creative Director for Vh1 Digital. Watch some of his Vh1 work below:

Tell me about your current production company.
I founded with a couple of friends a small production company/creative boutique called Bualá in Bogotá. We’re relatively new, but already have a list of very loyal clients, both international and local.

Have you done any client work related to children, education, parenting, etc?
Every time you work with children it ends up being somewhat educational. But I haven’t done any commercial work in this area, not yet. However, I recorded a rap song with Milah to help her remember the multiplication tables. She did all the artwork and I animated it:

From this video we’ve received some proposals to make more educational videos, which we’re considering.

How has fatherhood affected or influenced your professional work?
Parenthood just gives you a whole new perspective on anything you do creatively. Kids are the best supporters and at the same time, the harshest critics. Before I send out any idea I run it through my kids — they always give me just the right advice.

Conversely, how has being a producer/musician/creative person in general informed or influenced your role as a father?
I simply cannot separate being a creative person and being a parent. Both things happen simultaneously and they support each other.

Is there any particular child product you really like? Any you can’t stand?
I try to offer my kids what I would have liked to be offered at their age. A few months ago I thought it was the right time to get my kids into “Star Wars,” and it definitely was. We watched all six films together, chronologically, and they immediately became fans. Milah really got into “Back To The Future” after we saw the trilogy together, and they loved both “Gremlin” movies and “E.T.” which we watched just a few weeks ago. I think kids want to know about what we like, and we as parents have the responsibility to provide that for them. Kids are very smart; much smarter than us. But if we just play them a stupid Barney DVD, that’s all they’re going to know about.

Unlike other kids their age, Milah and Korben have no idea who Hannah Montana or Justin Bieber are, but they love Depeche Mode and can sing the “101” concert all the way through. That’s something I can take credit for and it makes me feel proud as a parent.

What creatives do you admire or have influenced you?
There are so many I cannot list them. But for starters, I love the work of Michel Gondry as a director and artist. In his videos he knows just how to portray music visually, and that has always been a goal in my own professional life.

The White Stripes “Fell In Love With A Girl”

Creativity seems to run in the family… I read that your father was in advertising.
Christian Schrader Valencia is one of the pillars of advertising in Colombia, besides being an outrageously creative person, an exceptional human being and an amazing artist. We’re very lucky and honored to have his presence – and his genes – in us.

Tell me about your experience as a musician. Did you learn an instrument as a kid? Study in college?
I have never received any formal music training at all, and I don’t consider myself a musician. I am, however, an artist, and I appreciate music dearly. I love the fact that I’m proving that anyone who understands and appreciates music can, in fact, create it.

Where can we keep current on DMK?
facebook.com/DMKband