Once again, the most recent episode of Modern Family paralleled our own lil’ modern fam, what with Lily dropping the F-bomb and all… 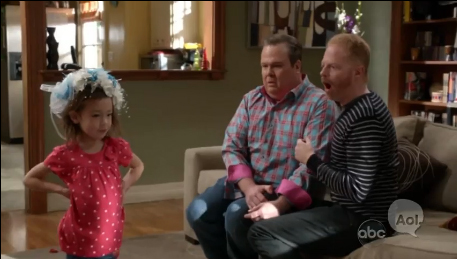 A week or so ago JJ uttered his first foul phrase — and while not nearly as gasp-inducing (or laughter-inducing, if you’re Cam), it still took us by surprise as it was out of nowhere and not in response to anything in particular.

I’m sure you’re wondering what our wee cherub said, but I admit I’m hesitant to say since Grandma and Nonna both have frequented this site on occasion. And while I make no pretense that this blog is merely a sweet and sugary photo album of their precious favorite grandson, let’s just say his words were not ones a Baptist minister’s wife or devout Italian Catholic would choose as JJ’s first foray into profanity.

Our initial response was to ignore it. When it came around a few days later, I responded, “Let’s say ‘I love you’ instead, m’kay?” Tonight he again repeated it — once more totally out of the blue — and I ignorantly asked him where he heard it. His initial response was to point the finger at his sitter. His sweet-as-pie, 60-year old, Mormon sitter. I was skeptical. So I ran down the list of more logical suspects. Did you hear Daddy say it? Yes. Papa? Yes. Bita (the sitter – thought I’d check again) Yes. Cordi? (the dog) Yes.

Well, we’ve got a mystery on our hands, don’t we? That, or we’re about to make a fortune off our cursing dog…

So what was your child’s first curse word? At what age? And how did you deal with it? I’m not just fishing to get comments — I really am seeking the knowledge (and empathy) of those who’ve walked this dirty road before.