I can’t believe another year has zoomed past, and with that a toddler that’s learned to zoom quite a bit on his own! To recap, here are a few of JJ’s favorite things from 2011…

Honorable mention: GAME!
I should probably rename this dishonorable mention. There have definitely been benefits to some of the apps, games and interactive books I’ve downloaded for JJ. And we’ve had plenty of fun moments poking around on Daddy’s iPhone (“GAME!”) and iPad (“BIG GAME!”) But I’ve never seen him lose his sh*t as much as when I have to remove said iProducts from his chubby little fists. He’s on hiatus for the time being, and is relegated to more age-appropriate (read: less expensive) e-toys for the time being.

Our toddler tech of choice is the Vtech MobiGo. JJ hasn’t quite figured out how to play the actual games very well, but does enjoy making all the lights and noises work. There’s one noise in particular that he mimics and then adds a little backwards kick that makes us do a spit-take every time. Way more fun to watch than the tantrum of an obsessed Apple junkie. 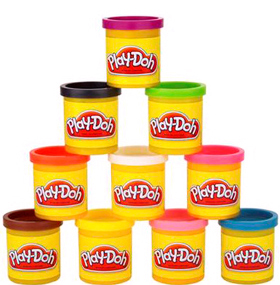 10. Play-Doh
This will probably show up higher on next year’s list, once JJ starts to Play more with the actual Doh. But for now he’s content to occupy himself with the little buckets it comes in: stacking and unstacking, throwing them on the ground and picking them up, flipping them over and then finding the lid colors. But he’s particularly fond of watching Daddy make pretty, perfectly formed pyramids and then decimating them like a towheaded Godzilla. 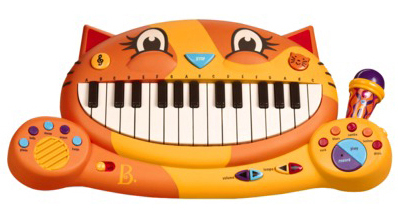 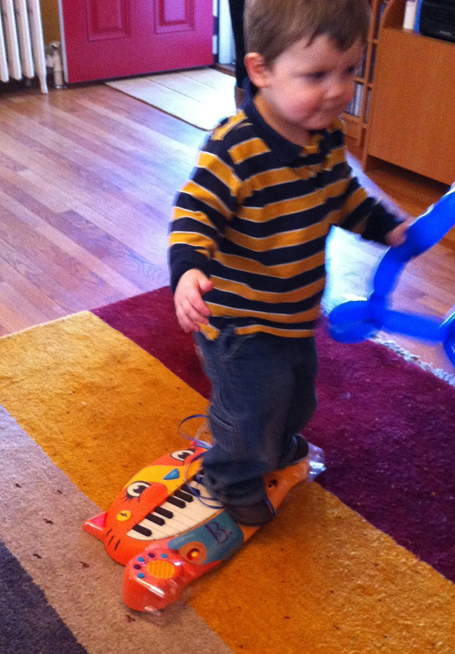 9. Meowsic
Another clever (and cleverly named) creation from B. Toys, this wee piano has a greater number of keys than most kids’ keyboards, a microphone, various note and beat settings (including disco and techno!) and the ability to record and playback. I’ve never been a fan of cats in general, and do NOT care for the meowing note setting, but JJ loves his kitty keyboard— whether he’s playing like Mozart or Jerry Lee Lewis (see photo). And if it ever gets to be too much for Daddy, there’s a big, handy STOP button for a nose. 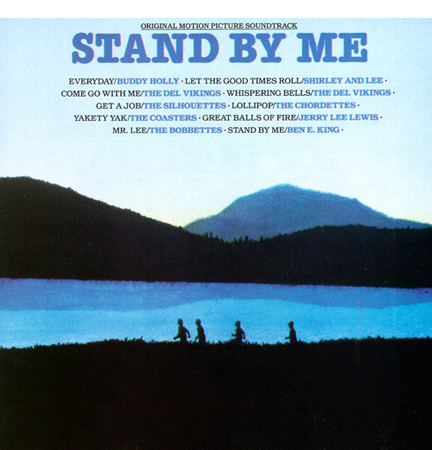 8. Stand By Me Soundtrack
Other than the Yo Gabba Gabba albums and more recently, Sinatra’s A Jolly Christmas, this CD has been one of JJ’s favorites for quite a while now. Filled with great rock and r&b classics, it’s a nice mix of the soft and silly, as well as the fun and rambunctious. Particular faves include “Come Go With Me” (the “Wah, wah, wah, waaaahhh” always gets a sing-along), “Yakety Yak” and “Lollipop” where JJ tries to mimic the popping noise Daddy can magically make with his finger and the inside of his cheek.

7. Dr. Praeger’s Spinach/Broccoli pancakes
Short of letting him stick a carrot in his ear, pretty much the only reliable way to get veggies into my kiddo. Also good with cheese and little bit of ketchup. (And only 2 Weight Watchers points.)

6. Trains
Whether it’s Thomas the toy variety, the rideable one at the local mall, or a model version at Brookside Gardens during the holidays, JJ loves him a “Too Too Twain.” Luckily he doesn’t like Thomas the show, which in spite its being narrated by two of the most notoriously volatile men in Hollywood (George Carlin and Alec Baldwin) is painfully boring. 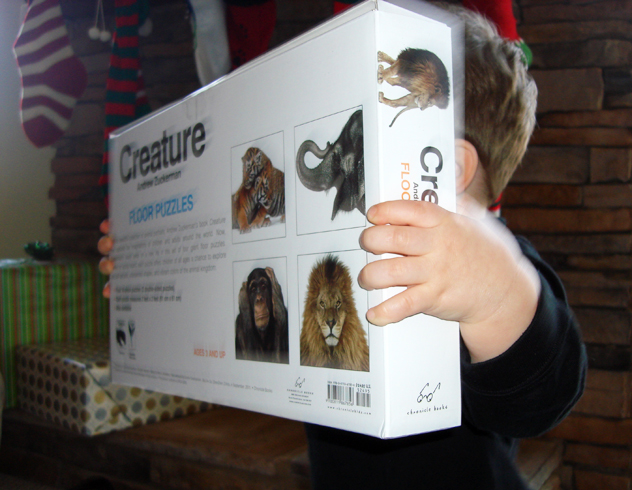 5. Poke-a-Dot: Old MacDonald’s Farm / Creature ABC
I love these two books almost as much as JJ… I came across Old MacDonald’s Farm in a pile of books while ransacking a soon-to-be-closed Borders. It had been worked over and nearly torn apart from in-store use, but after a bit of rummaging found an untouched copy. It’s a pretty basic counting board book, with the added bonus of each page being filled with plastic bubbles for toddler fingers to pop. And pop. And pop. Great for counting, learning animals, singing along to “Old MacDonald”, and for strengthening that all-important poking finger.

Andrew Zuckerman’s Creature ABC book is a gorgeously simple book of animal photography. The dramatic photos elicit the most dramatic animal noises from JJ, and you can tell he gets a little excited/nervous every time we get close to the L page. He often kisses the photo of the roaring lion, just to make sure it doesn’t pounce. Bonus: JJ got the Creature floor puzzles for Christmas! 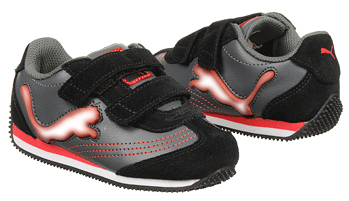 4. Poomah Neeker! (translation: Puma sneakers)
A super cool red & black sneaker with a light up puma… do they make them in adult sizes?!? 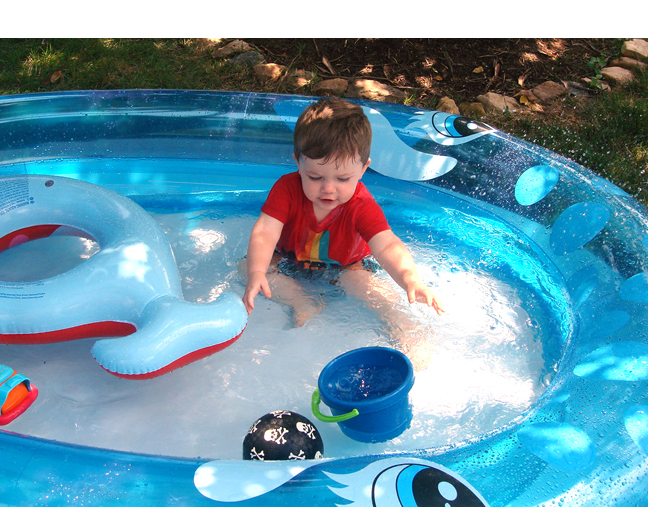 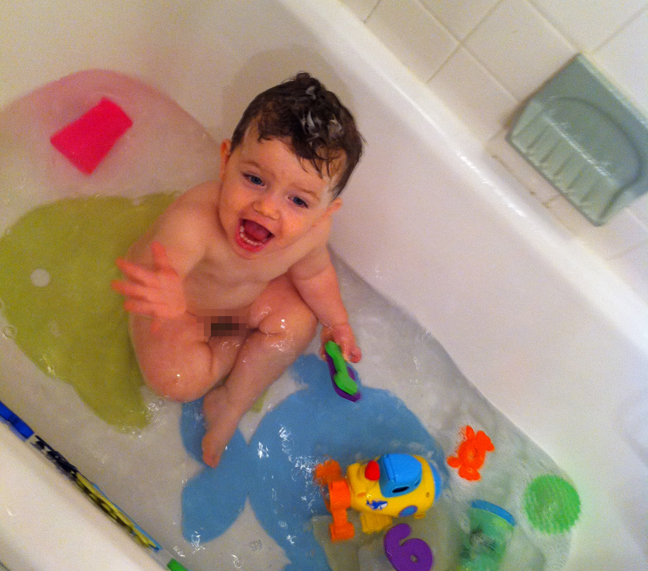 3. Pooltime/bathtime
There are any number of newly developed physical skills I could have added to this list (climbing, rolling, sliding, kicking) but all of these individual activities are regularly incorporated into any water-related setting we place JJ. Whether it’s his awesome whale pool during the summer or his nightly bath, this boy is our own little Aqualad: climbing in and out of the pool like a seal, rolling over on his back and popping up laughing if he happens to get his face underwater, sliding repeatedly down the back of the bathtub into the bubbles, or kicking his chubby little legs like a Michael Phelps mini-me. Such a joy to watch. Such a mess to clean up. 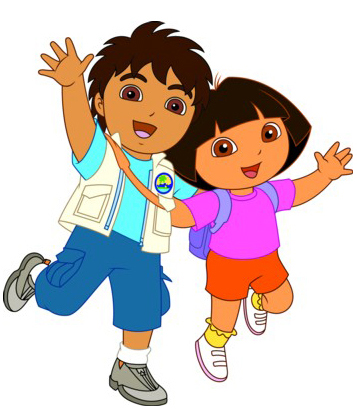 2. Dora/Diego
Try as I might, I could not keep JJ from the cute clutches of Dora (you know, the explorer) and her on-the-go cousin, Diego. But as annoying and repetitive as these toons are (and in my humble expert opinion, poorly animated) they’ve proven to be quite educational. Certainly in the area of…

1. Talking
JJ’s vocabulary and verbosity took off like a rocket this past year, and we’ve enjoyed every minute of it. We love being able to communicate a little better now (“No poo poo”), hearing him say things in his adorable 2 year-old enunciation (“Pweeeeze?”), and of course teaching him silly words and phrases just to entertain ourselves (“Purple Rain,” “Chewbacca,” “cray-cray” to name a few). But the greatest thrill is seeing him grow and learn and develop, as he starts to not just repeat what we say, but initiate ideas and requests and responses on his own. “Daddy car red!” “Yay, Gramma’s house!” and “Nite, nite tree!”

So as you reflect on 2011, what were the toys, shows, food, or thingamajigs that made your child’s (and your) life more fun and fabulous?