Alrighty, I am VERY much behind on my Advent doodles, due to the fact I was singing with the Gay Men’s Chorus of Washington Friday, Saturday and Sunday. So the drawings for those days are going to be done retroactively (Ghost of Christmas Past, anyone?) and based on some of the songs we performed…

Today (December 16th) illustrates “Angels We Have Heard On High” and also happens to be my Dad’s birthday, so this one’s also for him… 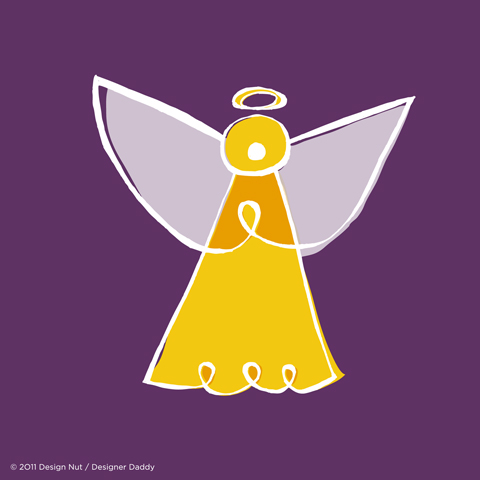 I grew up an Air Force brat, so our Christmases looked a little different from year-to-year. Some years we had live Christmas trees and snowdrifts up the side of the house, others were spent in tropical climates, where Poinsettia bushes grew in the front yard. But one of the few enduring holiday traditions of my childhood (and beyond) was my Dad sitting us all down to read the Christmas story (from the Bible, not the movie) before opening presents. As a child that was pretty annoying at times — it certainly killed our amped-up, pre-present-frenzy buzz. But as I’ve gotten older, I’ve found it a nice way to ease into the mayhem, remind us of the love we have for each other as a family, and that what we get/give really doesn’t matter in the end.

1And it came to pass in those days, that there went out a decree from Caesar Augustus that all the world should be taxed. 2(And this taxing was first made when Cyrenius was governor of Syria.) 3And all went to be taxed, every one into his own city.

4And Joseph also went up from Galilee, out of the city of Nazareth, into Judaea, unto the city of David, which is called Bethlehem; (because he was of the house and lineage of David:) 5To be taxed with Mary his espoused wife, being great with child. 6And so it was, that, while they were there, the days were accomplished that she should be delivered. 7And she brought forth her firstborn son, and wrapped him in swaddling clothes, and laid him in a manger; because there was no room for them in the inn.

8And there were in the same country shepherds abiding in the field, keeping watch over their flock by night. 9And, lo, the angel of the Lord came upon them, and the glory of the Lord shone round about them: and they were sore afraid. 10And the angel said unto them, Fear not: for, behold, I bring you good tidings of great joy, which shall be to all people. 11For unto you is born this day in the city of David a Saviour, which is Christ the Lord. 12And this shall be a sign unto you; Ye shall find the babe wrapped in swaddling clothes, lying in a manger.

13And suddenly there was with the angel a multitude of the heavenly host praising God, and saying, 14Glory to God in the highest, and on earth peace, good will toward men.

15And it came to pass, as the angels were gone away from them into heaven, the shepherds said one to another, Let us now go even unto Bethlehem, and see this thing which is come to pass, which the Lord hath made known unto us.

16And they came with haste, and found Mary, and Joseph, and the babe lying in a manger. 17And when they had seen it, they made known abroad the saying which was told them concerning this child. 18And all they that heard it wondered at those things which were told them by the shepherds. 19But Mary kept all these things, and pondered them in her heart. 20And the shepherds returned, glorifying and praising God for all the things that they had heard and seen, as it was told unto them.