Here it is, the finished mural on JJ’s bedroom wall! And not only did I finish painting, but I also hung everything back on the wall (including a couple of new things), put together a mobile, and hung that and a few other mobile-y type things from the ceiling. Needless to say, my back was not in top form during JJ’s party the next day. But that’s why God made Advil, rum, and husbands. 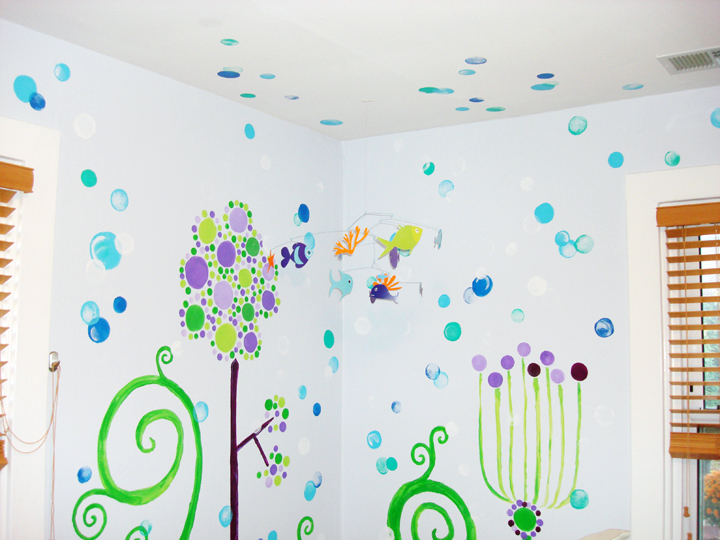 It’s hard to get a great panoramic view of the room (it’s pretty small) but the mural is mostly in one corner, with a bit spilling onto the ceiling and above the windows on either side. 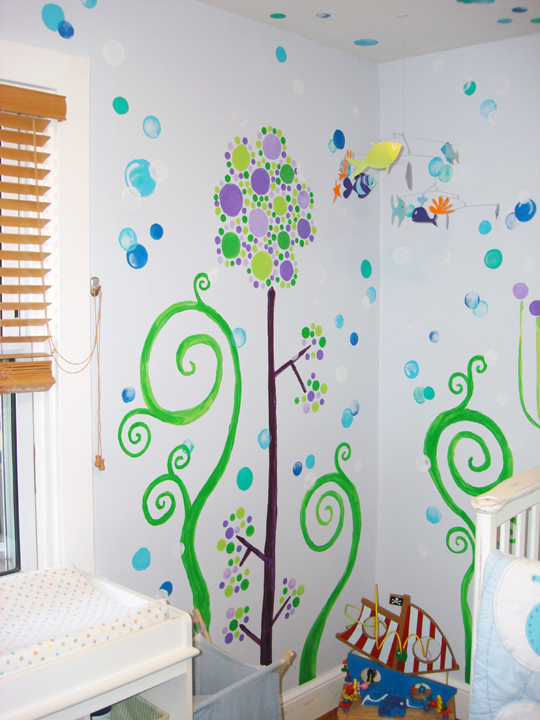 I was generally happy with it, but went a bit overboard with the bubbles. Unfortunately I can’t Photoshop them away, and I sure as heck ain’t painting over them anytime soon. So for now the bubbles remain a little busy. As bubbles often are. 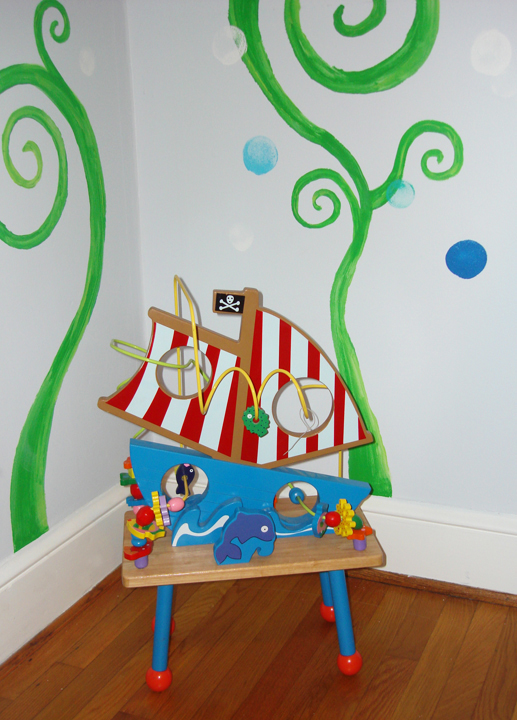 This awesome Pirate Ship Bead Frame Table is one of the first toys I bought JJ, which fits nicely with the underwater/aquatic theme. I had seen this in a doctor’s office and searched high-and-low to find it, and ended up having to buy it online from the UK. There’s also a really cool Tree Bead Frame Table from the same company. I love that it’s not plastic, but wood (which automatically makes it more educational!) but still really fun and colorful. 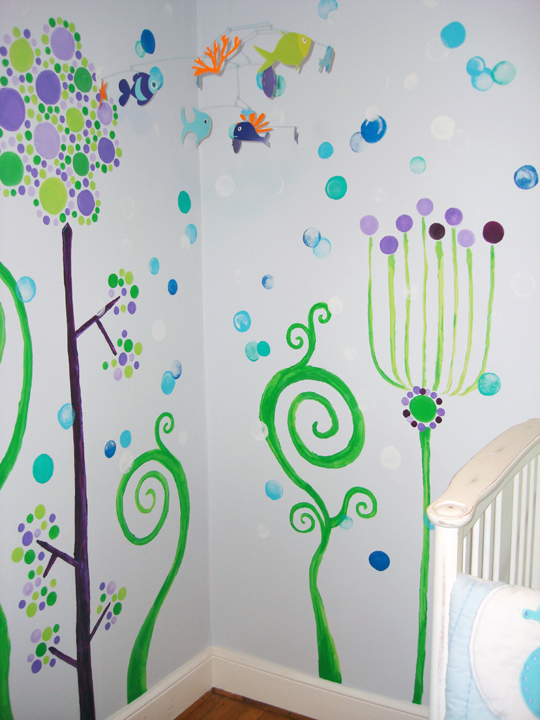 During JJ’s party I got paid the highest compliment — that the mural reminded them of something Tim Burton would do. They specifically mentioned Nightmare Before Christmas but similar whimsical swirliness pops up in many of his films: Edward Scissorhands, Beetlejuice, Alice in Wonderland, Charlie and the Chocolate Factory, and Big Fish. 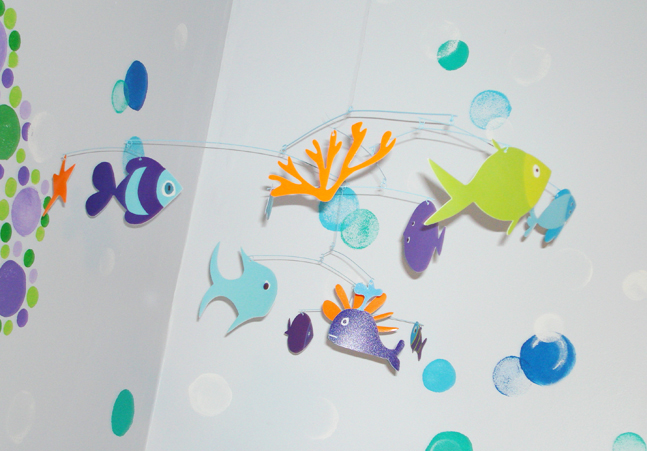 Speaking of big fish, we picked up this nifty mobile at the DC Aquarium. This aquarium fish gulag is atrocious, so save yourself the trip: buy the mobile here, and go to an aquarium here. But most importantly, visit the site of the company that makes the mobile, Djeco. This is about the most fun web site EVER. Among other things, you can change the color of the grass, trees and clouds! 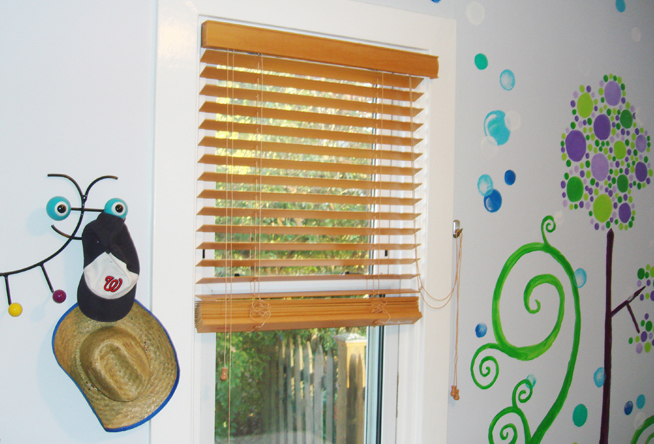 While shooting photos of the mural, I went ahead and documented the entire room (small as it is), so bear with me. Above you can see part of another very early (pre-birth!) purchase — the Caterpillar Wall Rack from The Container Store. It’s marginally oceanic, but it’s made of polka dots! The only downside is that when put to use, you cover up all the wonderful colored balls. 🙁

Here’s a shot of JJ’s dresser, a long-ago purchase from IKEA. It’s not the sturdiest thing in the world (oh yeah, I did say IKEA, didn’t I?) but it does the job. Plus we were able to customize it with fish knob pulls. Not only are they cute-as-a-button and fit the room’s theme, but they’re a might safer than the sharply square metal pulls the dresser came with. 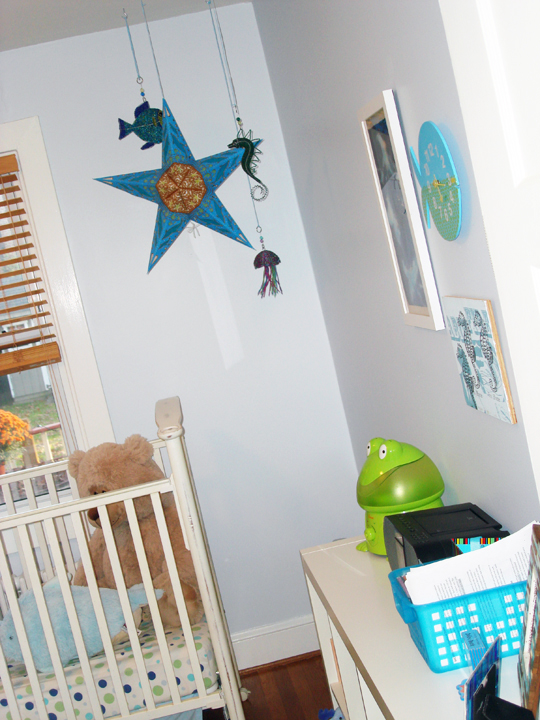 Shown above (and a close-up below) is another makeshift mobile made from various fishy purchases made over the years. The large star is a paper lamp from a street market in Portland, OR. It originally came with a light fixture that hung inside it, but that seemed like a fire hazard, so I gutted it and hung it with blue raffia string instead of a chunky electrical chord. Surrounding it are a few beaded fish. I got the seahorse locally, but the jellyfish and larger fish are from a little shop in South Beach. They’re made by Beadworx/Grass Roots Creations, but you’ll need to Google each piece individually as the Beadworx site is for wholesale purchases only. 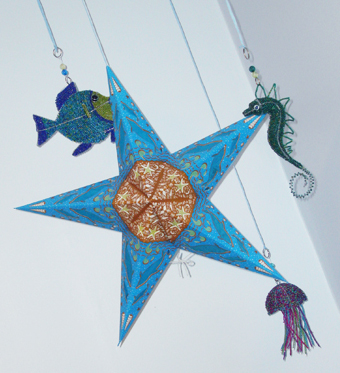 And finally, here’s a mish-mash of fishy stuff hanging over JJ’s bookshelf: (clockwise starting with the clock) Vitra Fernando the Fish Clock by George Nelson (which was shown last week in Cam and Mitchell’s kitchen on Modern Family), a mirror framed with antique metal tile, a seahorse collage screen-printed on wood (from Austin), and a beautiful painting on rice paper of jellyfish by my good friend Kem-Lyn Tan. 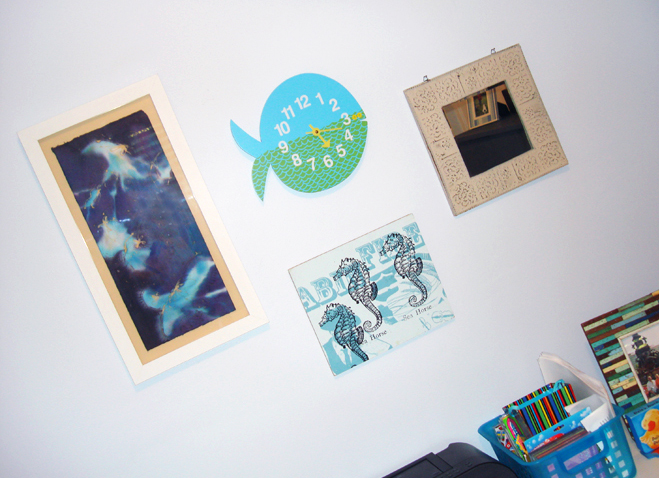 So thanks for indulging my little tour — for a minute it felt like I had my own reality TV show and was doing the “after” segment… Okay, on to the next project! (Lord help me)