Since it would have been impossible to top last year’s birthday invitation (and because we hosted another party at the house just a couple weeks prior) I opted for an email invitation for JJ’s second birthday party. I’m such a slacker, I know… Realizing the “Two” birthday is most frequently preceded by the word “Terrible,” I put a preemptive, positive spin on the graphic I attached with the invite: 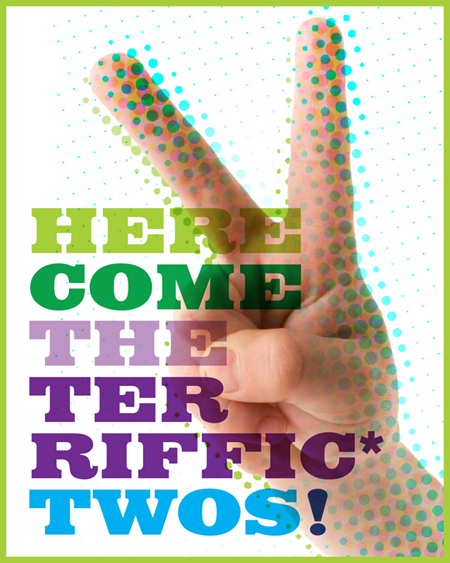 The asterisk read, “*There will be no mention of the ‘Terrible Twos.’ Hey, a little wishful thinking never hurt anyone!”

The party was a blast and JJ had all kinds of fun – opening presents, wallowing in piles of leaves, and romping around with visiting cousins. Speaking of presents, one particularly awesome but oddly-shaped gift was shipped direct from Amazon, which I un-boxed at the very last minute and realized was next to impossible to wrap. So I quickly tied on a twisty ribbon and tucked it behind all the other baby booty.

Of course JJ discovered it while goofing around under the food table. I caught him red-handed, and he turned around and gave this adorably impish grin: 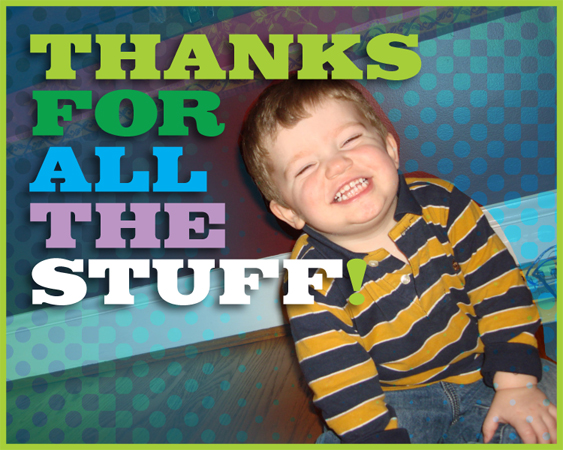 …which also worked perfectly for the Thank You emails.

So far the Twos are pretty terrific. Besides, how can you stay mad at that face?