I’ve seen a couple of dad-centric ads lately that made me smile. Not just because they were funny, but because they depicted dads being good parents without a hint of irony. Okay, maybe there’s a hint of it — but they definitely aren’t depicted as not knowing their way around the kitchen, running screaming from a diaper, or some other modern father stereotype. Instead they show warmth, competence, and that these guys actually enjoy being dads.

The first is a Tide commercial I saw the other night, and just loved the interaction between the father and his little girl. Very matter-of-fact, no OMG-The-Dude-is-doing-a-girl’s-hair sound effects. Just father/daughter awesomeness.

A longer version takes a slightly different direction, using the phrase “Dad Mom.” (I guess Mr. Mom is trademarked?) I didn’t like it as much as the first one, as it veered closer into the “Why is a man doing a woman’s job?” territory. But still sweet overall in its tone.

And finally, I spotted this print ad in Entertainment Weekly, from the normally über-macho Chunky Soup folks. In the past Chunky has tiptoed to the sensitive side by showing NFL players with their moms in spots I found both goofy and unable to relate to. But this ad — while still quietly touting their NFL connection — shows a “real” man: playing with his kids, letting down his guard, being there for them. 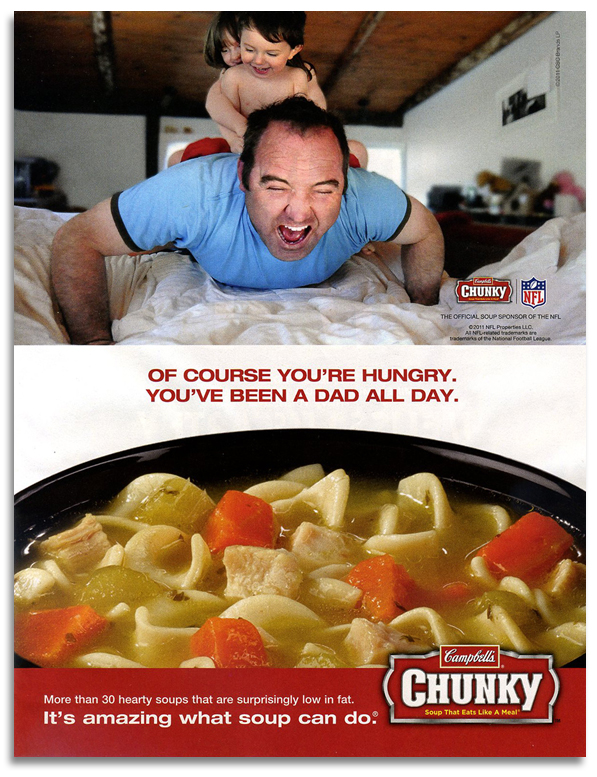 Thanks Tide and Chunky, for busting out of the stereotypes — keep up the good work!