The Most Important Thing I Ever Designed: Our Adoption Family Album 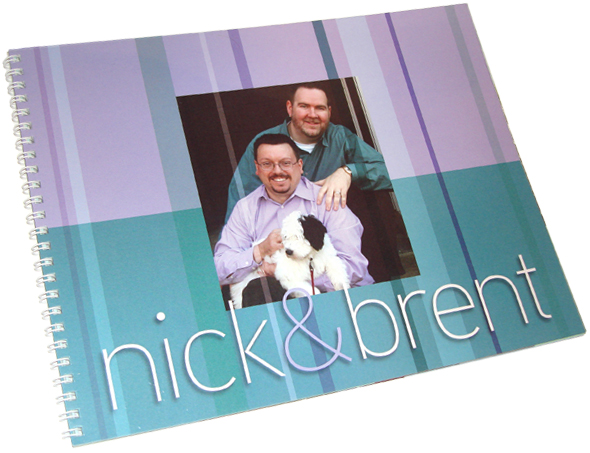 I was speaking at an adoption expo recently as a panelist on the topic “Are You Ready To Adopt?” In sharing our story, I referenced our adoption family album a few times, as it was such a big part of our home study process. And it struck me that a) our family album was the ultimate “Designer Daddy” project, and b) I hadn’t yet featured it on the blog. Time to remedy that!

For those of you not familiar with the adoption process, it varies if you’re adopting domestically or internationally, and if you’re going through an adoption agency or the foster care system. But in all cases, potential parents must submit to a home study, which is way more than a walkthrough to make sure electrical outlets are covered. Financial, employment, and residential histories, a physical exam, fingerprinting and background checks, letters of referral, home inspections from the fire department and several other procedures and stacks of paperwork are all part of a home study. I can’t tell you how many times I’ve heard (and thought), “Good grief! If biological parents had to go through this, it would completely remedy overpopulation!”

While all that sounds pretty overwhelming, the most stressful and time-consuming component of our home study was creating our family album. It’s also The Most Important Thing I’ve Ever Designed.

“What’s a family album?” you ask, and why does it deserve such a lofty and ominous-sounding title? Because it’s what the birthparents used to get to know and eventually choose us to adopt JJ. As a designer, you’d think laying out a photo album would be a snap for me, right? But I’m also my harshest critic…I wanted everything to be just right. Perfect, but relatable. Unique, but normal. Comprehensive enough to accommodate every taste, but concise. So yeah, no pressure.

However, the advice mantra we kept hearing was be yourself. The natural thing for any potential adoptive parent is to try to be all things to all people, to puff themselves up, make themselves shinier and more interesting than they really are. Yet the truth is you never know what’s going to cause a birthparent to notice and ultimately choose you. It could be the color of your house, the fact that you have children already (or don’t), or that you’re really into square dancing.

JJ’s birthparents told us there were three things that drew them to us from looking at our album: 1) that I was into comic books, 2) we call each other “husband”, and 3) we weren’t skinny. JJ’s birthmother is overweight and was encouraged by our non-waifish physiques that we wouldn’t be judgmental of her. And after chatting more about the “husband” comment, we’re pretty sure they chose a gay couple partially to defy their conservative parents. Let’s hear it for rebellious teenagers!

As we I* was preparing to delve into this project, it became apparent that the toughest task was going to be choosing the photos… for two reasons (wow this is getting really listy…) 1) We had soooo many, and 2) most of them were in print form only, piled up in boxes and closets and nooks all over the house. 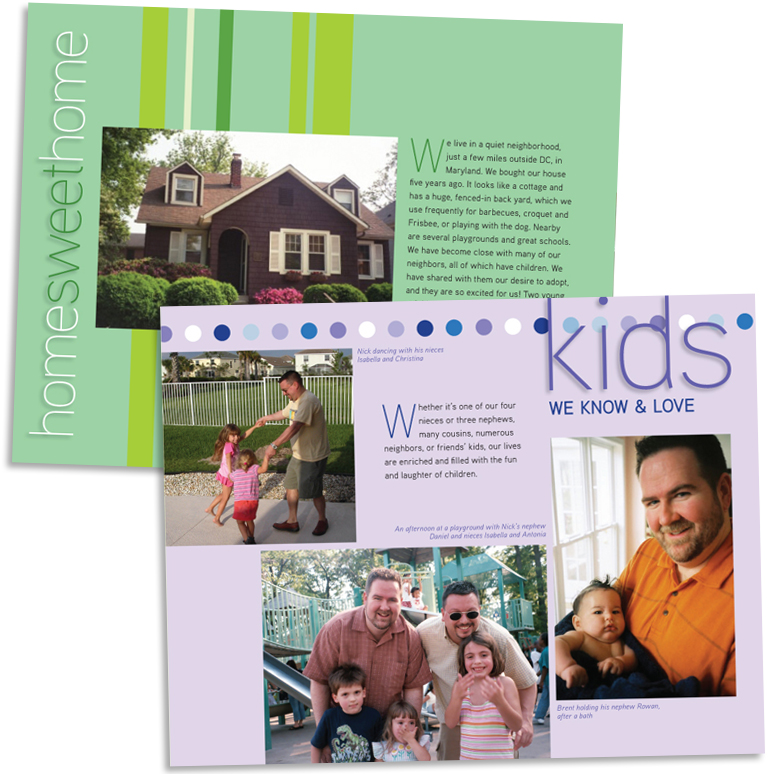 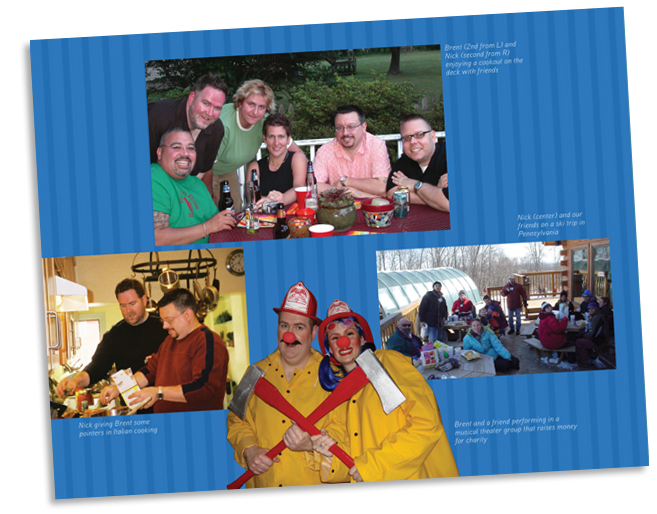 It wasn’t too difficult finding photos for each of these categories, yet it was painful whittling them down to a manageable amount. You want to put your best face forward – but not look too vain. You want to show your life as exciting and fulfilling – but not so fulfilled that you’d be just fine without a child. You think picking the right Facebook profile photo is stressful? I liken making a family album to choosing the right headshot to be cast in a movie about your life — where you’re not necessarily guaranteed a role!

In addition to the photos, the album needed to include:
• Letters about each other
• Letters of reference from 1 family member and 2 non-family members
• A letter to the birthmother

It was also pretty daunting to write letters about each other. Not since our wedding vows had we written something that held such importance. I could think of plenty of great things to say about (soon-to-be) Papa, but what would be the perfect thing to say to match us with our child? Again, honesty was key. 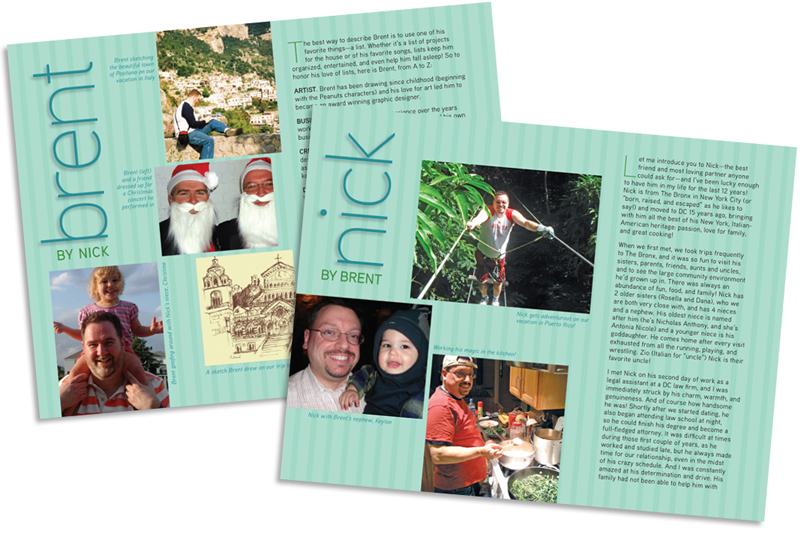 Needless to say, all the paperwork, trips to the police station to get fingerprinted, (two!) visits from the fire department, and multiple interviews with our social worker were finished long before the family album. But it did — finally, after much tweaking and second-guessing and self-applied pressure — get done.

We had multiple copies printed and bound and shipped off to the agency, and within a couple of months (which we hear is pretty unheard of) we were matched with JJ’s birthparents. Several months later — and several trips across country, and lots more paperwork — we had a son! (Trust me, it was less of a breeze that it sounds, but I gotta end this post sometime!)

In the end I can’t say that The Most Important Thing I Ever Designed was also the most perfect. It didn’t win any awards, break any boundaries or even make any money. However, it brought us our little boy, and you can’t ask for any more perfect results than that. 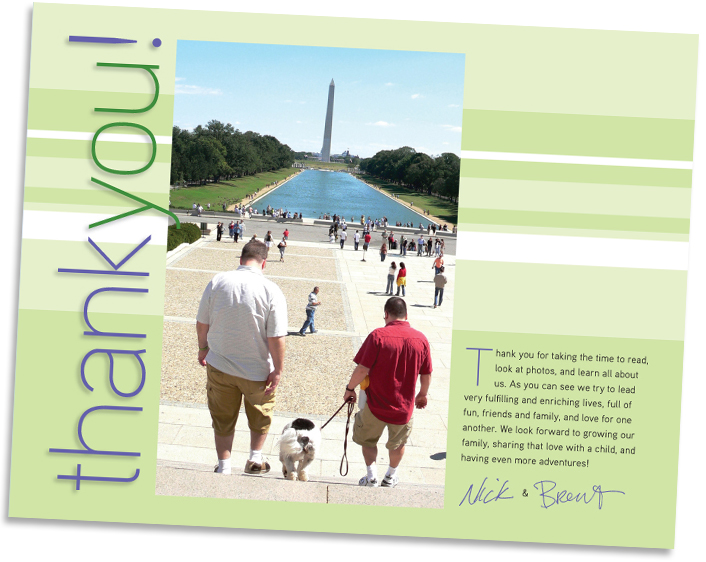 *Yes, I pretty much did this on my own. But that’s what happens when one-half of a couple is a designer. Luckily, my other half is an attorney… so guess who had to do all the paperwork?!? 🙂

**This is ironic because we included a photo of us having drinks with friends on the deck, and it was a favorite of the birthmother’s. Cheers!

13 responses to “The Most Important Thing I Ever Designed: Our Adoption Family Album”