Happily Ever Adopted (The Tale of Two Fairy Dads)

It’s coming up on JJ’s second birthday, and subsequently this blog’s first. My son (as well as my profession, but mainly my son) was the inspiration to start Designer Daddy. Yet due to JJ being adopted, I’ve been reluctant to share too much personal stuff — not only to protect our and the birthparents’ privacy, but also to protect JJ’s story. I want to be able to tell it to him first, when he’s ready to hear it, and in a manner his Papa and I think it should be told.

Because of this, I’ve not bared my soul as much as other parent bloggers. And I’m a little jealous of that. My best writing comes from my heart and my gut, not from my head (or my wit, or design sensibilities) so I feel like I’m not sharing the full story. Because I’m not.

But a couple of things pushed my buttons recently that I need to get off my chest.

The first was watching the pilot episode of ABC’s Once Upon A Time.
I’d seen mixed reviews, so my expectations were low and I didn’t get around to it until several days after it premiered. (DVR is one of Daddys’s favorite inventions) Overall it was a decent show, but my beef is with its not-so-happily ever after portrayal of adoption.

A few highlights:
The Evil Queen casts a spell that freezes time and transports all your favorite storybook characters to the Real World (the subtly-named town of Storybrooke — not a tricked-out, Vegas penthouse on MTV, just to be clear). They’re now unaware of who they are and where they’re from. The reason for the spell? To make sure there are never anymore happy endings. Luckily, Snow White is able to send her newborn daughter (Emma) to safety, as she was foretold to be the one who could save them all from this curse… in about 28 years. This was preceded by a noble speech from Snow, telling Prince Charming she wanted to give her daughter her “best chance.”

Hopping over to the Real World, Emma (on her 28th birthday, natch) is tracked down by her own “abandoned” son Henry, now 10 years old. Henry’s adopted mom is none other than the Evil Queen in her RW iteration. “I don’t have parents. Just a Mom. And she’s… evil. She doesn’t love me, she just pretends to,” explains Henry.

Emma also meets the RW Snow White, who is not only Henry’s sympathetic schoolteacher, but a bird-whisperer and candy striper to boot. They have a run-in with Evil Queen, who blames Snow for Henry seeking out his birth mom. After EQ storms off, Snow explains to Emma, “[Henry’s] like any adopted child. He wrestles with that most basic question they all inevitably face: ‘Why would anyone give me away?’”

Later on, Emma responds to Henry’s complaints of his life sucking: “You want to know what sucking is? Being left abandoned on the side of a freeway. My parents didn’t even bother to drop me off at a hospital. I ended up in the foster system and I had a family until I was 3, but then they had their own kids so they sent me back.”

And finally, when Emma brings Henry back home, Evil Queen snarls, “You may have given birth to him, but he is my son! You gave up [your] right when you tossed him away. Do you know what a closed adoption is? It’s what you asked for. You have no legal right to Henry and you’re gonna be held to that… Get in your car and leave this town. … If you don’t, I will destroy you.”

So to sum up Once Upon A Time’s talking points:

Okay, I realize it’s just a TV show. And that — duh — I shouldn’t expect healthy, functional, or even alive parents from a fairy tale. Still, I couldn’t help thinking what a slightly older JJ would think of this story. What would any adopted child think? I guess I’ve lived with this kind of storytelling my whole life and never given it a second thought.

And it’s only fair to wonder how kids who’ve lost a parent to death or divorce, or who live with stepparents feel when hearing or seeing Snow White, Cinderella, Dumbo, Bambi, Peter Pan, Finding Nemo, The Lion King, … ok, you get the picture.

The other button-pusher happened just a couple of hours later.
I was with a group of friends, one of which was moving away. As part of his goodbyes he said, “Until Friend A got here, Friend B was the only other father in the group.” My defenses were immediately raised. I was around before Friend A. And also a father before him. I felt like I’d been simultaneously punched in the gut and completely unnoticed.

A few minutes later I mentioned this to the friend leaving, and he apologized profusely, knowing as soon as he’d made his comment he was mistaken. I knew it wasn’t his intention to exclude or forget me, but that’s not the point. The point is how quickly I went to the place of feeling insecure and defensive about my status as a father, even amongst close friends. It’s also important to mention that all three of the other men are heterosexual, biological fathers. They all assured me they see me equally.

However, I know my family and I are different, a fact I celebrate. I take pride and joy in our uniqueness of being a two Dad family with an adopted son. But we have to work extra hard to obtain equal rights, equal protection, and equal respect. Legally, and also emotionally. Moreover, the emotional respect, protection, and acceptance is something I have to give myself. Every day, for as long as I’m a father.

One of my favorite things to do with JJ is read to him, whether it’s a board book or an interactive iPad app. I love that bond and the closeness — protecting, teaching, and watching him learn all at the same time. I realize it’s up to me to protect and teach him through the stories I share with him, whether it’s about three pigs, seven dwarves, or two fairy dads and their magical little boy. 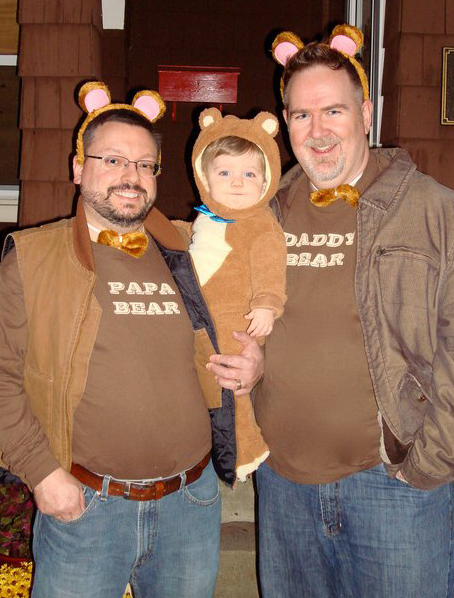 Last Halloween, in front of our cottage

(P.S. While I keep the details of our son’s adoption private, I’m always happy to discuss more of our story offline, or at least off-blog. Always feel free to drop me a line at daddy @ designerdaddy . com)