Anyone who knows me well (and has been in my office) knows I’m a big comic book fan. In fact, my love of comics has not only influenced my choice of profession, but also contributed to Papa and I becoming JJ’s Dads.* Those who know me very well know that my all-time favorite superhero is Aquaman. I’m sure some of you are wondering, “Why the talks-to-fish dude?” Sorry, but I’m not here to justify my admiration of the Sea King — I’ll save that for another post. But I am here to plug a big ole’ shindig going on over at The Aquaman Shrine! 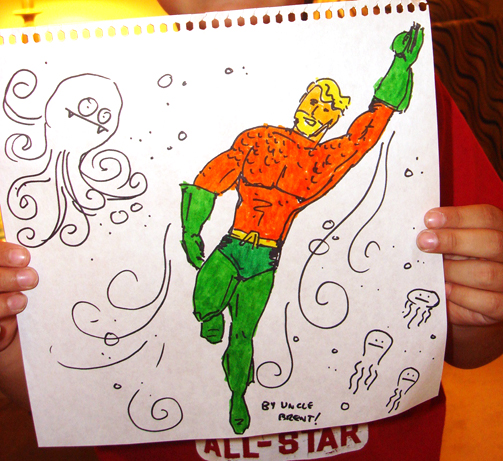 My nephew holding up a sketch of Aquaman I drew for him to color in.

From The Shrine’s press release/birthday invite…

Next week will be a historic week for fans of DC Comics’ reigning Sea King — Aquaman! Not only is it the launch of his new ongoing series by the all-star creative team of Geoff Johns, Ivan Reis & Joe Prado, but Aquaman #1 also just happens to coincide with the King of the Seven Seas’ 70th anniversary of his first appearance in More Fun Comics #73!

The Aquaman Shrine will be marking this special event in a unique way on Sunday, September 25th by throwing a birthday party for Aquaman exactly 70 years to-the-day after More Fun Comics #73 hit the stands for sale on September 25, 1941!

Who will be attending this party? Dan Abnett, Tony Bedard, Kurt Busiek, Nick Cardy, J.M. DeMatteis, Ramona Fradon, Pat Gleason, Dan Jurgens, Paul Levitz, and Joe Prado are just a few of the many creators who will be visiting the Shrine on Sunday to wish Aquaman a Happy 70th and to share their unique perspective with fans, friends, and family of Arthur Curry. Special surprises will be in store and this event will be fun for comic book fans of all ages!

And that’s not all! In addition, the Shrine will be following up the big 70th birthday party with EXCLUSIVE CONTENT from Aquaman artist Ivan Reis every day leading up to the release of Aquaman #1 on September 28!

Panel drawn by Ivan Reis, from Aquaman #1, on sale September 25

So whether you’re a fellow comics nerd, or are just curious about whatever happened to that guy from Super Friends, go check it out!… And tell them Designer Daddy sent you!

*Ask me about this offline sometime…