Kevin McFadin is the husband of a former co-worker of mine. He and his wife Dawn are both incredible illustrators/designers and together own and operate Fan Works Design in Richmond, VA. He also wears a few other hats, which I’ll let him tell you about…

Tell me briefly about your design business and what kinds of clients you have.
I’ve been running the shop with Dawn since 2002. Before that I was an AD in Alexandria [VA] and up until then I was the staff illustrator at a couple of newspapers. I still pursue illustration, inside and outside of the shop.

Getting up and running out of the DC Metro area many clients are, of course, associations and non-profits. We’ve worked with organizations based out of Richmond, such as Southern States and Child Fund, and helped some start-ups here in town when we were starting up ourselves.

I also volunteer/DJ at WRIR 97.3 FM, the independent radio station here (the largest LP station in the country) and volunteer on the Marketing Committee. So I offer up what I can when they need it: posters, logos, CD packaging, ads, etc. It’s an amazing place, amazing people and a real oasis.

How long have you been a dad? How many kids? Ages?
Renny turned 9 in June. She’s it… she sets the bar pretty high.

How has fatherhood affected or influenced your work (positively or negatively)?
It put a lot of things in perspective, especially priority wise. We’ve made a conscious choice to be around a lot for Renny (something she’ll hold against me when she’s a teen no doubt) so flexibility is a must. We both went right back to work after she was born — no down time whatsoever — so “work” has been part of her routine from Ground Zero. She’s keenly aware that she is the top priority, but she can only be the top if we get some work done when we need to. Work is work; if she ever feels trumped by it in any way, then I’ve blown it. 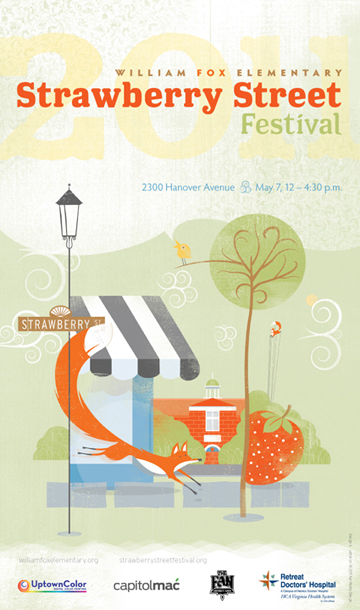 Have you ever designed anything for or related to your children?
Renny’s school has a big festival every May and this year I worked on the identity for the event. To be honest though, not much. Renny handles her own branding: who knows her demographic better than her? She’s very keen on thinking up her own ideas and producing them, writing her own copy, and she can AD with the best of them. I’m more than happy to be her production artist when she needs it. She doesn’t need another adult ruining her creativity. I want to cultivate her taste, not extend mine. 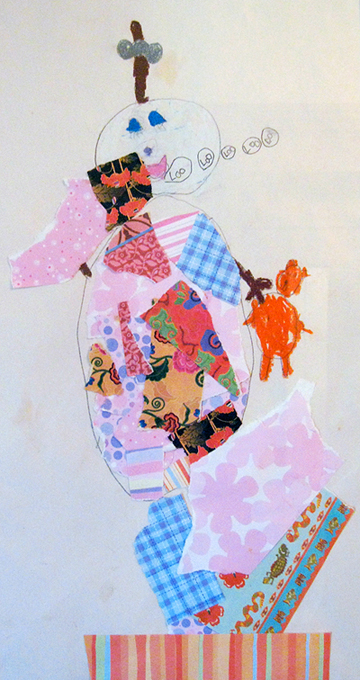 An original collage by Renny

She has a piece of her art hanging in the Virginia Museum of Fine Arts. That’s something I never achieved, so she’s already doing just fine.

Have you done any work for clients that are related to children, education, parenting, etc?
Some illustrations of course have a child component to them. I’ve done some work for Scholastic Books. I also recently did an illustration for Child Fund that was geared towards adults and children collaborating and strategizing together and I’m wrapping up a web site on acoustics that’s geared towards children. Not too long ago I did a logo for an outfit in San Francisco — Changing Neighborhoods, Changing Lives — that definitely put up an umbrella over children in their mission and goals. 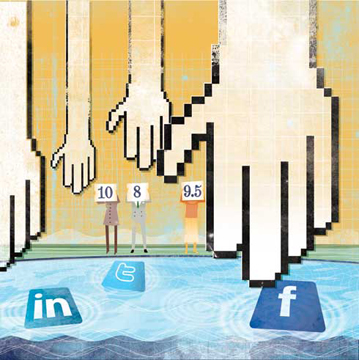 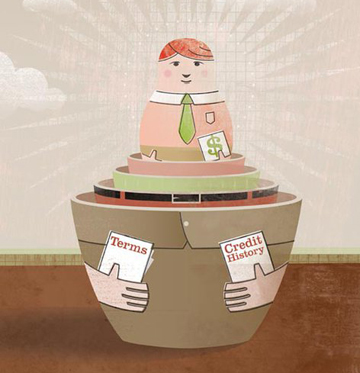 When I worked at the newspapers there was a lot of stuff flying around that was aimed heavily towards kids and family — special feature sections, back-to-school projects, spots and lead art, etc. When we’d get something in that was very kid heavy, I’d always try to get a kid involved in the artwork, but that was usually shot down. Go figure.

Do you have any work that you feel was inspired by your child or fatherhood, whether it’s directly related to children/parenting or not?
I’ve done some personal work that has that in it, but no one would recognize it but me. If Renny catches wind of me working on something I always want her to chime in. She can be brutal in the best of ways. It’s not the hoary “innocence of children” or any maudlin sentimentality… She just doesn’t have all the baggage to muck up her thinking and says what she thinks. Which is how it should be. I hope if she pursues something creative down the road, that all leads to her skin being nice and thick. I can tell you it’s thicker than most adults I know.

Is there any particular child product whose design you really like?
I really thought about this one, and  … no. Not really. I learned real quick that most products are aimed at parents and it’s just a racket, pure and simple. I went utilitarian quite a bit pretty quickly. Not that we surrounded her with ugly things or shoehorned her into an ascetic… but that $200 mobile that is oh-so cute? The alluring jingle of a dog’s collar can do the same thing and stimulate her more. That backpack carrier that transforms into a stroller? Use it twice and she’ll outgrow it in a month. I can aim that hard earned green at that stack of mounting expenses that came with the kid or something that is far more relevant than a pair of monkey underwear. Besides, she can make her own. With me. I’m not a complete curmudgeon by any means, but much of that stuff falls into ‘luxury’ items and I approach them that way.

We got her lots and lots of books… many that I want myself. Still do. Charlie Harper and Jim Flora are two big heroes, to both of us. 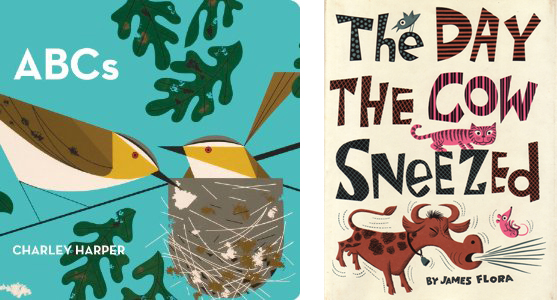 She’s always been exposed to music — not all our stuff by any means — but I’m a big music head so she’s been exposed to lots of stuff. There’s no way to really shield her from pop culture (which is neither very much these days, unfortunately) completely… so she’s aware of all of that, but she can pick and choose on her own.

Too much stuff talks down to kids and it doesn’t need to. She’s smart, she knows what she likes and what she doesn’t. And she can explain why.

Magnets still rock. If it has a magnet, chances are there’s something cool about it.

Any you can’t stand?
Most of it I can swallow. I swallowed my share as a kid that’s for sure. There’s not too much I won’t let her take in, within reason. Movies, TV — I can talk her through most stuff if she has questions. Music is tougher, being a big fan and devourer of music. I’ll get flak for playing stuff for her from other parents, but really… Katy Perry or some other “musician” trying to sing about freaking in a jeep or melting the boys popsicles on the beach? Suddenly a bunch of old hairy guys singing about blasting off to Neptune to fight the Robot Overlords seems pretty harmless to me. And honestly, a hell of a lot more fun. You think a kid wants to bop along singing about amassing bling or boob tubes in California?

Robots win. Every time. School of Rock is one of the best family films I can think of. And you still cannot go wrong with Monty Python and Pee-Wee. 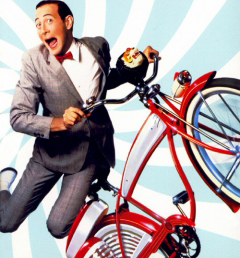 Anything else you’d like to add?
The only advice or tip on parenting that I got that ever held up or made sense: “Take everything everyone tells you and throw it out the window. You have to learn it for yourself.”