It’s been several weeks since I’ve posted what’s been spinning at Club JJ, and the only reason I’m doing it now is that I’m on the Monday end of a long weekend of nonstop toddler, and I haven’t the strength or creativity left to write about anything funnier or more original. But I need to write something… dust is starting to settle on this blog.

So here are a few albums that I’ve subjected JJ to lately:
The Go-Go’s “Beauty and the Beat”
Erasure “Nightbird”
Marie Antoinette Soundtrack*
ABC “How To Be A… Zillionaire!”
Lily Allen “Alright, Still”

I usually try to pick something fun and upbeat, since most of our music time is while getting dressed in the AM or playing in the afternoon. As you can see, I’ve been doing my best to get JJ hooked on “real” music now, hopefully bypassing the monstrous children’s music industry that’s sprung up since I was a kid. It’s bad enough I’ve got various theme songs and jingles floating through my head all day. I don’t want to have to hear Kidz Bop or some such nonsense in the car for the next 10 years, too. 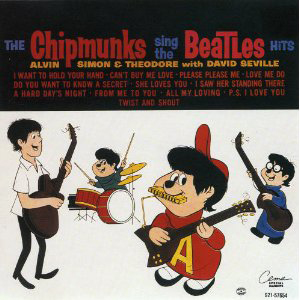 The beginning of my lifelong love of The Beatles. Seriously.

When I was a youngster, kids’ music was nursery rhymes, Sunday School songs, and silly stuff my Dad taught me. The purely kiddie albums I most fondly recall are John Denver & The Muppets Christmas Together and The Chipmunks Sing The Beatles. I know that second one would make a purist cringe, but you gotta understand that my parents didn’t grow up on rock music, so neither did we. My mom was discouraged from listening to Elvis, so opted instead for Pat Boone. My Dad was a minister by 18, and loved classical music and hymns. 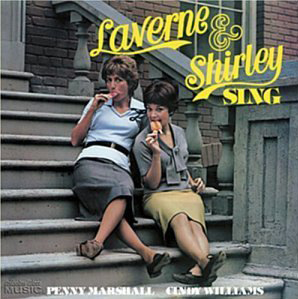 I do remember my Mom got us an 8-track once — “Laverne & Shirley Sing!” — horrible stuff, and yes it’s now available on CD and MP3. We also had this “mix” tape (also on 8-track… this was the late 70s) that included some Beatles, Neil Diamond, show tunes and a few classical pieces. We used to get into our “dancing outfits,” (argyle socks jacked up to our knees, one of my Dad’s undershirts, and our tighty-whiteys) and go nuts spinning, hopping and grooving all over the living room. Not very cool, but a great music memory nonetheless.

One of my first music memories with JJ was when he was just a few months old. We were listening to the Priscilla soundtrack and Patti Page came on. I started belting out “I don’t care if the sun don’t shine, I get my loving in the evening time, when I’m with my baby!” This was shortly after the adoption was finalized, all the paperwork had been signed, sealed and delivered, and it hit me that JJ was really and truly, always and forever, MY baby. We spun round and round, all the while Daddy singing through tears of joy.

So, 2 questions for you:
1. What kind of music did you grow up on?
2. What of your music have you passed on to (or attempted to pass onto) your kids?

* The Marie Antoinette soundtrack is one of those that’s way more memorable than the movie. I remember being really psyched about it because the trailer featured music by Gang of Four and New Order and the website was just gorgeous. The double-CD showcases other pillars of New Wave: The Cure, Adam & The Ants, Siouxsie and The Banshees and Bow Wow Wow. It’s practically an 80’s primer. The film fell flat in comparison.