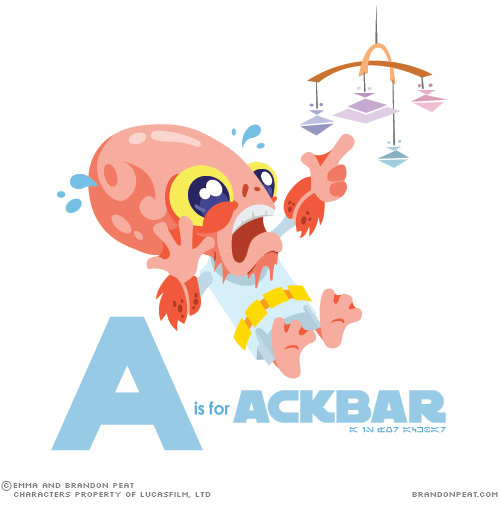 A while back a friend shared a link to an out-of-this-world adorable alphabet a designer had illustrated for his impending son. More on those ABC’s in the interview below with brand-spanking-new dad, Brandon Peat…

Tell me briefly about your design business and what kinds of clients you have.
I graduated from college in 2007, and was soon hired by a prominent ad agency in Fort Wayne, Indiana as an Art Director. I gradually expanded into the role of Interactive Developer as well, and after two and a half years decided to strike out on my own. That was January 2010, and I’ve been successfully full-time freelance since then – now operating as Brandon Peat Design, LLC.

I specialize in illustrative design and interactive Flash development, though I have experience in every area of design and enjoy being able to bounce between them as the job requires. My main clients are design agencies who lack a full-time web, Flash, or video specialist, but I’m always engaged in a smattering of jobs from individuals as well. I’m always looking for new clients, too!

How long have you been a dad? How many kids? Ages?
I am a new dad! My first son, Tycho Maximus Peat, is about four months old. We definitely plan on having more, but hopefully not for a while yet!

How has fatherhood affected or influenced your work (positively or negatively)?
Since I work mostly from home, being a dad is both awesome and difficult. I love love love being around for so much of Tycho’s early development, helping to take care of him, etc., which is something that a lot of day-job dads can’t do.

On the flip side, that means I have to focus on my work with the distraction of a crying (or worse, adorably cooing) baby, which can be very tough at times. You definitely get a lot more adept at multitasking and doing work with just one hand. I’m actually currently bouncing back and forth between answering these questions and playing with Tycho.

Have you ever designed anything for or related to your children?
When my wife Emma (also a graphic designer) and I found out we were pregnant with our first child, we began thinking of fun ways to decorate a baby boy’s room. Since we live in an apartment and aren’t allowed to paint the walls, that meant posters or prints of some kind. And, being artists, we naturally wanted to create those prints ourselves. In the end, we decided to illustrate an alphabet of characters from one of our favorite franchises – Star Wars – dubbed “A is for Ackbar.”

Selecting each letter was a lengthy process. The characters who made the cut are primarily from the Original Trilogy (no Prequel characters here!), with a few from the Expanded Universe of books, comics, and video games. We also tried to keep the illustrations as non-violent as possible (in the words of Wuher, “No blasters!”) for maximum kid-friendliness.

I sketched the basis for each character in pencil, which Emma then rendered and colored in Illustrator – it was very much a collaborative process. The project was her idea, even…man I love having a nerdy wife.

The project wound up being a viral sensation when we put it online, with over 100,000 hits in just the first week, to say nothing of the myriad sites that re-posted and re-blogged the images.

Is there any particular child product whose design you really like? Any you can’t stand?
So many to choose from! I’ll have a lot of research to do in this area as Tycho gets older…right now he just likes looking at peoples’ tongues.

Legos, definitely, were a huge part of my childhood and will be a part of Tycho’s as well. I’m pretty biased toward the older sets, [as] they’re just getting more and more expensive. So here’s my OCD Designer Dad solution: When he gets old enough, I’m planning on digging out my brick bins and instruction booklets – yes, I still have all of them…at my parent’s house. I’ll re-assemble some of my favorite models (to get all the pieces in one place), then break them down again, putting the pieces in Ziploc bags. Then (the best part) design vintage-looking Lego packaging and box ‘er up. Tycho will get to play with the same sets I did and I’ll get to do a fun design project – win-win!

Toy dinosaurs will also be omnipresent in our household, though these often fall into the “can’t stand the design” category, in regard to both the packaging and the toys themselves. I fancied myself quite the paleontologist when I was young, and would get very upset when my herbivore dinosaur toys had been sculpted with sharp incisors. I actually wouldn’t play with them until my dad blunted their teeth with a utility knife.

Anything else you’d like to add?
Though I don’t know (or care) if Tycho will grow up to be a graphic designer, he will definitely be raised in a design-conscious home. I’m sure he’ll be calling out billboard typefaces in no time.

Thanks for the interview! Be sure to check out my portfolio website for more on me and my work at www.brandonpeat.com.