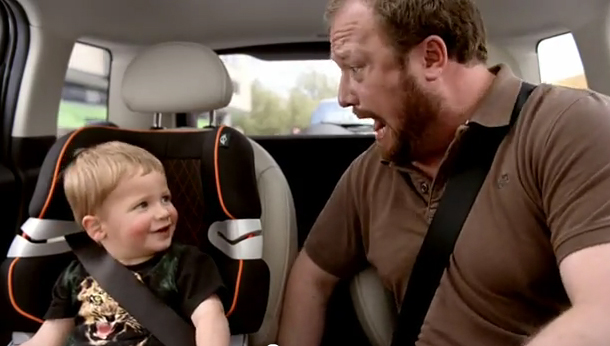 I saw this TV spot a while back, but hadn’t been able to hunt it down until now. It annoyed the hell out of me and I wanted to share  — it’s a prime example of how advertisers think it’s funny to show men as inept when it comes to parenting. Take a quick look:

Seriously? Why is that funny? Because there’s pee in it? There are certainly examples in my own life where I can look back on a pee (or poop) mishap and laugh — I’m not saying pee ain’t funny. What I’m saying is that three grown men losing their minds because a child needs to use the bathroom and they have no clue what to do other than pull over and hold the kid out so he can urinate into the air — is just lame. A cheap joke. And it perpetuates the concept that dads get a pass on basic parenting skills and responsibilities. Like remaining calm under pressure. Or changing diapers.

And from an advertising perspective, I don’t see how this commercial makes anyone want to buy this car. The description says “The brand-new MINI Countryman provides yet another good use of its four doors…” That’s the selling point? That is has four doors? And that they work? Seems like they pissed away good money on this ad.