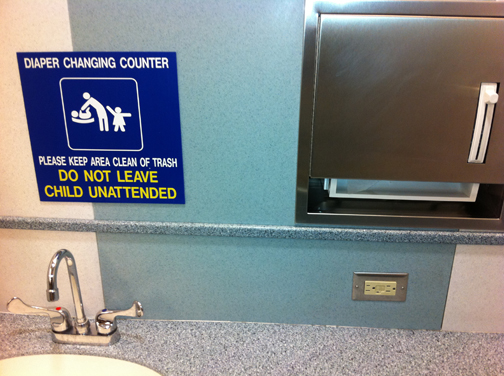 We spent the Thanksgiving holiday traveling (never again!), and while JJ did reasonably well, there were a few things that definitely challenged our patience — like the baby-changing station shown in the photo above.

Can you guess what’s wrong with the design of this changing table (other than it basically being a sign slapped onto a former handicapped sink)? I’ll give you a clue: it rhymes with spelectrical sproutlet.

I don’t know if the ladies’ room also had the same retro-ill-fitted changing stations, but I would be surprised. I’ve found that only newer building have well made changing stations or tables in the men’s room. They sometimes even have a “family restroom” where you can change diapers, breast feed, play board games, etc. But many older buildings have added changing tables to the little boys’ room as an afterthought, often in inconvenient or poorly thought out places.

The absolute worst changing table I’ve come across is in DC’s Union Station (food court level). The table was the foldout variety, placed at the end of a narrow room between 2 walls of urinals. Even if the urinals weren’t being used, it puts baby awfully close to all sorts of nastiness. I ended up infiltrating the women’s room, where the table was just inside the door — it allowed me to face the wall with my back to the (presumably) surprised females patronizing this particular facility.

The only time I’ve found no changing table whatsoever was in the men’s room of my partner’s Catholic high school, when we were attending his reunion last year. Shocker, right? Luckily a very accommodating administrator allowed me to change JJ on the table in the teacher’s lounge. When God closes a door, he opens a kitchenette.

So while we’re in sharing mode, what public restroom horror stories do you have? 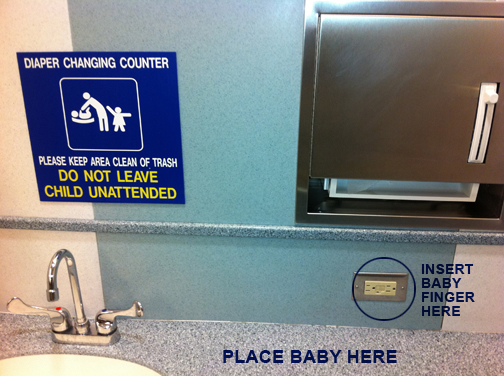