I thought it fitting that my inaugural post be the first (and possibly best) example of me The Designer intersecting/collaborating with me The Daddy.

Almost immediately after my partner and I decided we wanted a family, I started obsessing about the most important thing I wanted to accomplish — the birth announcement! I brainstormed and sketched for months, and when we found out we were having a boy, I settled on an elaborate baseball-themed piece that would feature a photo of my hand that folded out to reveal Papa’s hand, then Cordi’s paw (not sure how I was going to manage that), and finally the baby’s hand. Each panel would feature a letter to spell out the word “TEAM”, with a final tag line of “Welcome to the newest member of the team!”… or something like that.

Well, the great Creative Director in the Sky had different ideas. JJ was born a month early, so my obsessions turned to important things like food, clothing and shelter. During that first week, any time not spent feeding, changing or sleeping often involved a lot of baby-watching. One particularly peaceful and sunny afternoon, I snapped a handful of photos of JJ in a semi-swaddled state as he was wiggling on the bed.

I looked at the photos and was immediately struck by how beautiful he was, and how — as Christmas was a mere 6 weeks away — this was the best gift ever.

So the whole baseball idea was benched, and thus was born a simple (and vastly more economical) birth announcement / holiday card. 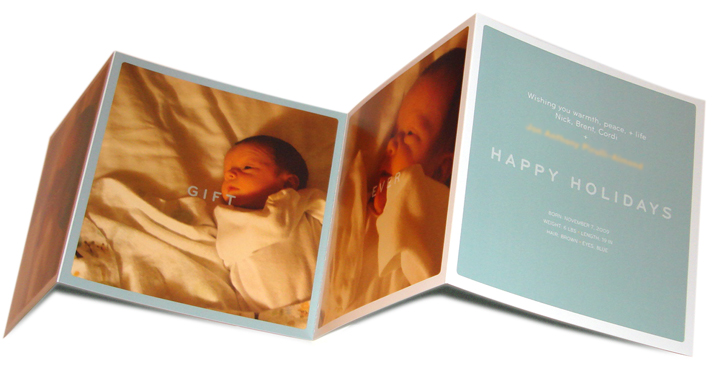 Maybe it’s not the most clever or trend-setting card, but it has certainly garnered the most compliments of any piece I have ever designed.

Luckily I had the foresight to gang-print thank you cards as well. 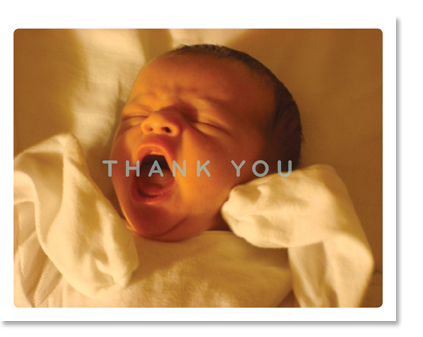