How Can I Celebrate Pride in the Face of the Orlando Tragedy?

A friend recently asked if I was going to the Pride festivities in DC this year. And for the first time in nearly 20 years, not only was I not going — it had completely slipped my mind.

I came out as gay my first year in DC, and Pride has been an important part of my history ever since. I’ve braved the crowds as a newly single man, sung with the Gay Men’s Chorus from the main stage, took my brother to his first Pride as an out gay man, and marched in the parade with my husband and son, dressed as superheroes. DC Pride also falls near my birthday — often on the very day, as it did again this year.

But the weekend was already booked solid with decidedly non-gay activities, chores, and other familial stuff long before my friend’s reminder. On Friday night — as younger LGBTs were disco-napping and float-building — I was corralling my son into bed and mentally reviewing the weekend’s busy schedule, when I was inspired to create this graphic: 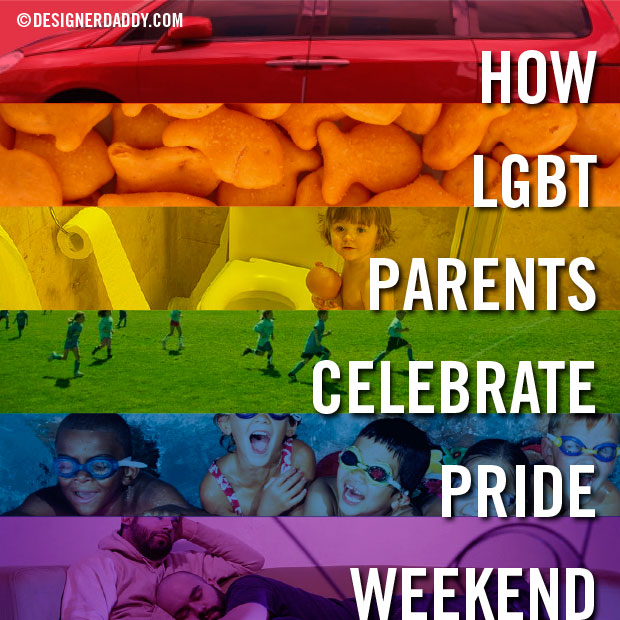 I posted it on Facebook Saturday morning, with this caption:

So how do LGBT parents celebrate gay pride? Well, for this gay dad, mimosas are replaced by juice boxes; Dykes on Bikes give way to tykes on trikes; shirtless go-go boys become toddlers streaking thru the sprinkler. And the only drag is us dragging our tired bodies to bed well before midnight.

Our hair may be grayer, but our lives couldn’t be any more colorful!

.
I don’t do a lot of memes, but I was feeling a bit out of the loop, and this made me feel a bit more Pride-y. By the reactions I got from many of my LGBT parent friends and readers, it rang true with them as well.

While the pictures are meant to be humorous and ironic, they’re also a fulfilled wish list of sorts: family; connection; loving companionship; an endless sea of Goldfish crackers. My life is no less a celebration of being gay than when I was hurling rainbow colored beads into crowd-lined streets or belting out drunken show tunes with my chorus brothers. It’s the next step in my evolution as a gay man, bearing the fruit of what so many before me have struggled, fought, and died for.

Saturday afternoon, as I watched my son play his final baseball game of the season, I decided to write something more about the graphic, expanding on the idea of the “mundane” life of a parent as its own Pride celebration. I made more mental notes that evening as we drove home from swimming and a cookout at a friend’s house. Yet like the final, purple photo, Papa and I were spent well before midnight… sound asleep while the wonderful world of Pride partied on elsewhere. My post would have to wait until Sunday.

I woke much too early to use the bathroom, habitually checking my phone as I crawled back in bed. I sleepily noticed the headline “Shooting in Orlando Gay Club,” and wondered if anyone had been killed. I was awoken less than an hour later by my perky 6-year-old, wanting to show me the cool thing he’d done in Minecraft. As is tradition, he crawled over me and lay in Papa’s spot, who was out walking the dog. He settled back into his game and I remembered the headline, and saw it had changed to “More Than 20 Dead.” My mind went numb.

I wanted to read more, but knew I risked getting sucked into a vortex of information and reaction overload. And it would spill over onto my undeserving family. And breakfast had to be made and eaten. And it was my birthday.

There was a card from my son, placed at my spot at the breakfast table. I marveled at how colorful it was, and how I loved the exclamation point at the end of his name where he signed. He smiled as he swallowed his breakfast whole and scurried off to play, leaving Papa and I to our fatherly conversations of grocery lists, laundry, plans for the afternoon… and on this morning, dozens of dead gay people.

Later that morning, Papa was off shopping and I was pulling things together for the afternoon, when I received two short messages — both from the friend who’d asked me about Pride.

“Largest Mass Shooting in US History”

.
Everything went numb. I didn’t know what to think, how to act, what to do next.

But things were set in motion, responsibilities had to be fulfilled, smiles to be worn. Papa returned from the supermarket, and as we put groceries away, I updated him. He was, of course, dumbstruck. But there was no time to process, lots to do. I packed up sunscreen, water, gift bag, and son. It was my birthday, and DC Pride, and more than 50 people — most of them gay — were dead. And I was going to a birthday party… for my son’s best friend.

I continued to push the horror from my mind. I had to focus on the directions to the outdoor pavilion in an unfamiliar part of the county, as well as my son’s frequent music requests from the backseat. I was having a hard time wrapping my head around any kind of celebratory thoughts. My hope was that sugar-fueled 6-year-olds would be a distraction from the terrors in the real world, but that wasn’t quite the case.

Their energy, while initially fun to watch, soon had me twisted with anxiety. My son in particular seemed hell-bent on climbing every sharp, slippery rock he could find circling the nearby lake. Under normal circumstances I’m the more cautious/less-chill dad. However, today I was in full-on helicopter mode — my nerves were shot and my protective instincts on high alert. I was not being the fun birthday party dad, at all.

Eventually all the kids were herded onto the large pontoon for a ride around the lake. Not content to stay ashore, I boarded with the few other parents, but kept a safe distance from my son and the other life-vested youngsters. I watched them vie for the best spot at the rear of the boat, and attempt to one-up each other with their exclamations and exploits. Before too long, though, Jon grew tired of the constant competition and came and sat next to me. Leaning over and sighing, he asked, “Is the party almost over?” 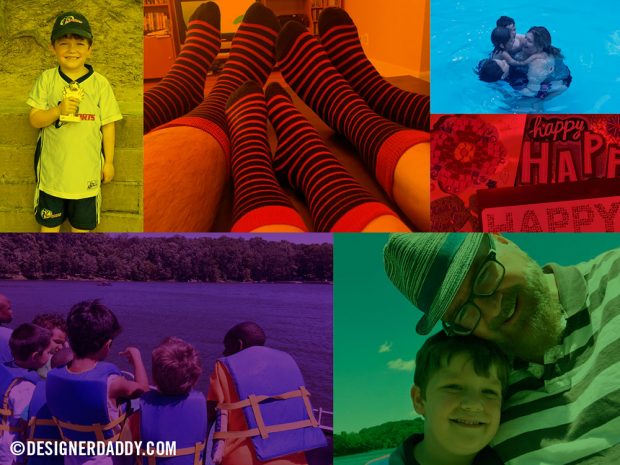 The weekend wasn’t without feelings of being appreciated and loved, and certainly a deep sense of gratitude. However, I’m still not quite sure what to think, how to act, or what to do next.

How in the hell do you celebrate a birthday at times like this? Or show pride in the face of tragedy? Or enjoy Father’s Day next Sunday when 50 have lost sons, fathers, brothers, husbands, boyfriends, friends?

3 responses to “How Can I Celebrate Pride in the Face of the Orlando Tragedy?”