And in a couple of blink-and-you’ll-miss-them moments, a pair of gay dads and some lounging lesbian moms make an appearance. The gays are the ones arguing that it is not, in fact, “all about the breast.” 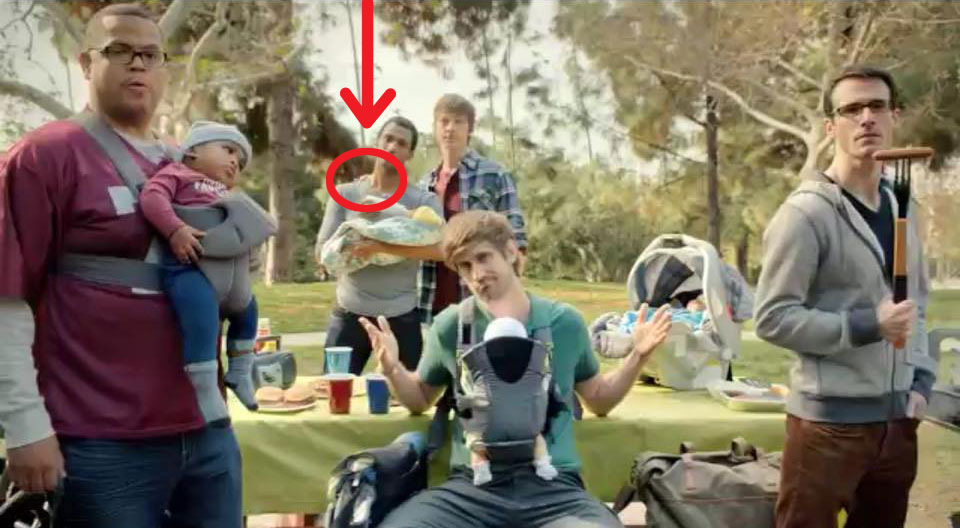 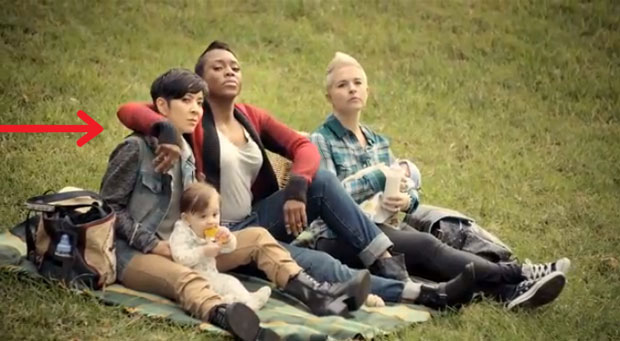 The conflict peaks with a poopie diaper throwdown, all parties advancing on the swingset to make their points the loudest. The mood then changes from silly to somber, as all the parents race to save a runaway baby carriage. This of course makes them realize the triviality of their tiffs, as they find common ground in all being parents who love their kids. Cue warm and fuzzies and all the feels, as everything is summed up in a short bit of copy: 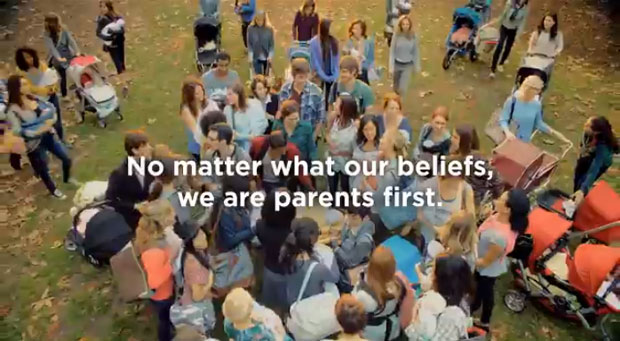 So what’s my beef? Why is this near- and not all-the-way-flawless?

I appreciate that dads are represented as one of the “gangs.” Big points for touching on issues pertinent to modern fathers — being made to feel less capable than mothers, being mistaken for a babysitter. Kudos for using the inclusive “parents” in the text at the end.

So why then did you sully all of that with the exclusionary tagline, “Welcome to the Sisterhood of Motherhood” and the hashtag “#SisterhoodUnite?” Why go to the trouble to include fathers at all, if you’re just going to erase them within the final shot? 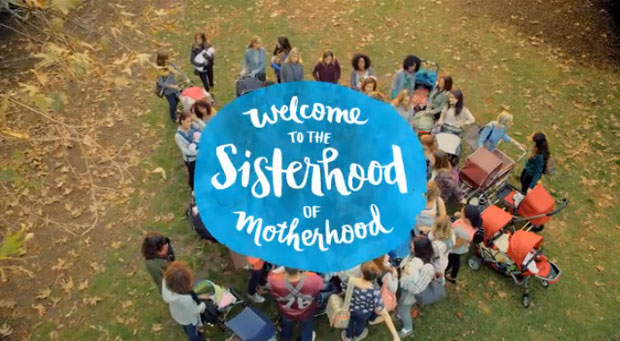 But don’t throw dads a bone only to snatch it away at the last minute. It’s irresponsible, disingenuous, and just plain inconsistent.

I saw one Facebook commenter (YouTube comments are closed) say that the fathers in the video are just a device to help illustrate the points regarding mothers. I beg to differ. Dads are not merely stand-ins for when a breast isn’t available. In fact in my family, my son has two dads — so I appreciated seeing the men shown here, and didn’t see them as mom surrogates at all, but as parents.

Similac was targeting their largest demographic — mothers. This makes sense business-wise, and I think they assumed dads wouldn’t care. And on the whole, I think they’re right. So why take the time to write about it?

Not only am I a dad, but I’m a gay dad. Formula was certainly the most logical solution for us, as we adopted our son from birth and his biological mother lived on the opposite coast. Breastfeeding was an option, albeit a complicated and inconvenient one. So I appreciate the effort on the part of Similac to include dads, and the ever-so-subtle gay couple in particular. However, the omission of fathers from the final frames of the ad is completely contrary to the message of the campaign — that we’re all in this together.

As I thought about this further, I realized this sense of exclusion was not unfamiliar.

Nearly every time I turn on the TV, go to the movies, read a book, or visit a web site, everyone is heterosexual. Couples — whether sitcom, romcom, historical or space age — are a man and a woman. Children have a mother and a father. Happily ever afters are for a prince and a princess. It’s frustrating for me, and even more so when considering my young son. It’s a familiar feeling of being given the occasional morsel, but never quite feeling fully welcome at the table. Great progress has been made on the legal front as well as in the minds of many Americans, but the overriding culture still — almost always — assumes straight.

Otherwise supportive friends (both online and in real life) have addressed questions to a group I was a part of, such as, “What do you guys do when your wife does this?” or “What does your wife think about that?” On the rare occasion I bring it up, it’s met with either apology, “Oh my gosh, that was totally not my intention!” or explanation, “Of course I meant spouse. I just said ‘wife’ since most of the guys here are straight.”

Should I not let it bother me? Just be glad I’m included in the conversation? Happy I’m allowed to be part of the group at all?

Continuously bringing it up — either as a gay man among heterosexuals or as a father among mothers — can be exhausting; but I’m committed to making my voice heard. Yet, I have to pick my battles. Not because they’re not all worth the effort, but because at some point I have to get back to being a supportive husband, a proud gay man, and an attentive father.