Earlier this year, our family had a uniquely awesome experience — we starred in a TV promo for PBS KIDS! Ours was one of several testimonials featuring parents of real-life PBS KIDS viewers, and the only one featuring same-sex parents. It was filmed and produced by a wonderful crew of folks who descended upon our home, made us up a bit and filmed us doing stuff like making cupcakes, playing in the backyard and watching TV. It was really hard work.

I heard the promos had finally been made available to the individual PBS affiliates, but as each station makes its own programming schedule, there would be no way to know when and where they would air.* However, the production company kindly provided a download of our (very) mini epic, and gave me the go-ahead to share it.

Grab some popcorn, but you’d better make it a small…

Curious how we got this gig? It turns out a mother of a child at Jon’s preschool works in the PBS KIDS marketing department. She sent out a call via the parents’ email list looking for “real-life stories of young PBS KIDS viewers, who have grown more curious or more engaged with the world around them thanks to PBS KIDS.”

I responded right away, as one PBS KIDS show in particular had made a real impact on both Jon and me.

Daniel Tiger’s Neighborhood is an animated spin-off of Mister Rogers’ Neighborhood, featuring the next generation of characters from the original show. While Daniel has a “traditional” tiger family (dad, mom, baby sister), other characters include single mom Henrietta Pussycat and her daughter Katerina, next-door neighbors O the Owl and his nephew X, and Lady Elaine† who is married to Music Man Stan (a live action character in the original show; both versions are African-American) — they have a precocious, mixed-race daughter named Miss Elaina.

In addition to the wonderful diversity represented in the cast, there are also a lot of great lessons the show teaches. Aimed at preschoolers, Daniel Tiger deals with issues foremost in young minds in a sensitive, honest way. Starting school, visits to the doctor, dealing with anger, trying new foods — it covers pretty much everything. One episode I really appreciated was “Daniel’s Babysitter.” Meant to address fears a child might have being separated from their parents, it was also quite groundbreaking in making the babysitter a male. Prince Tuesday (oldest son of King Friday) came over to watch Daniel with no special attention given to the fact that he was a boy. It’s rare enough to see a father portrayed as being nurturing and responsible with kids — even more so a male babysitter.

While I’ve yet to see same-sex parents (or an LGBT person of any kind) on a mainstream kids cartoon, it means a lot to us as a family to see not-stereotypical characters presented in such a matter-of-fact way. And who knows, maybe Prince Tuesday will find his Prince Charming in a future episode.

So yeah, Daniel Tiger is a great show (among many others), and the entire experience was a blast! Here are a few highlights from our day in the spotlight:
. 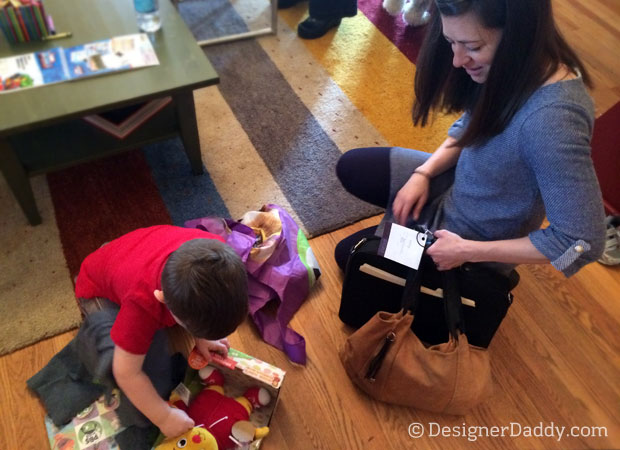 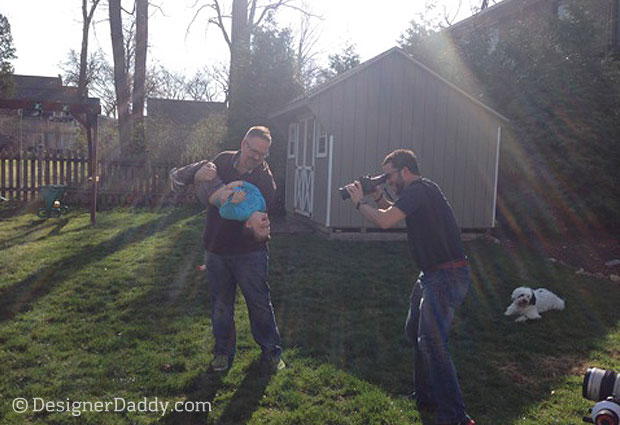 The cameraman films me slinging Jon upside down in the backyard. Luckily he got enough footage before either of us barfed.
. 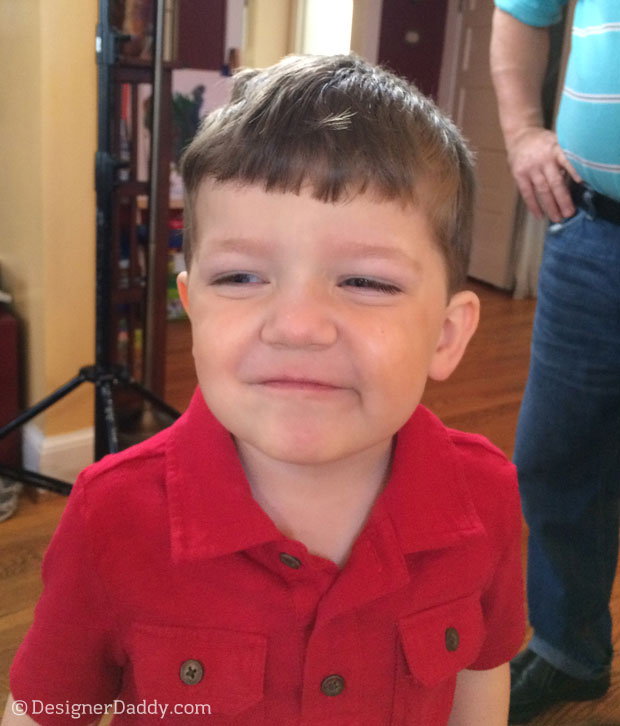 Fresh from the makeup chair, Jon practices mugging for the camera. Our little ham.
. 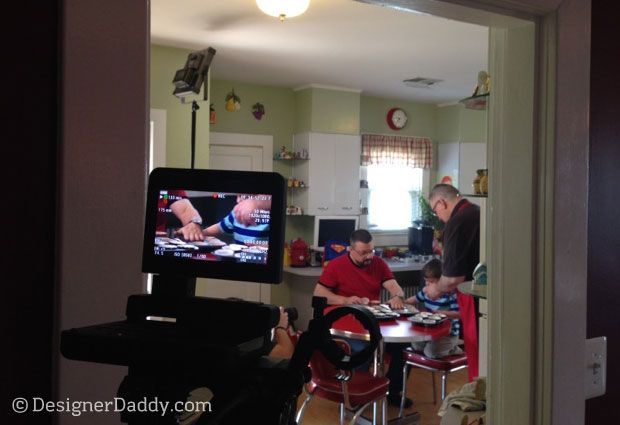 Unfortunately, our cupcake-making segment didn’t make the final cut. Fortunately, we still had cupcakes to send home with the crew!
. 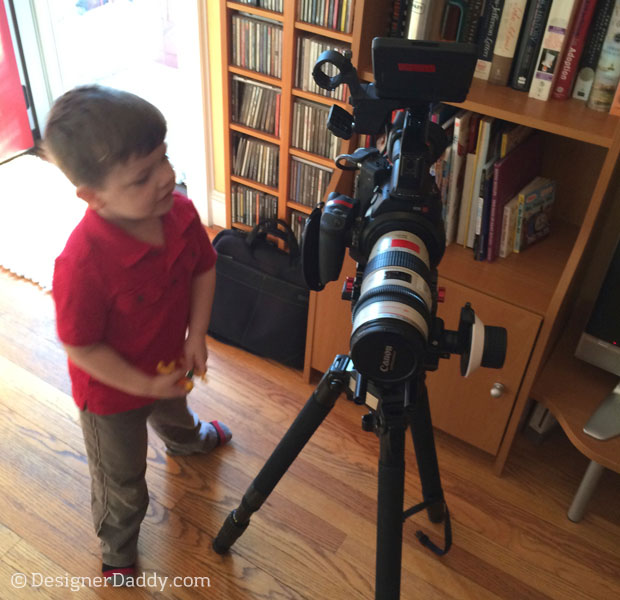 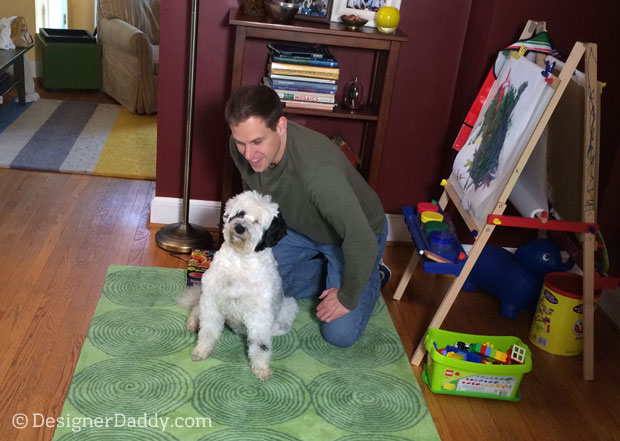 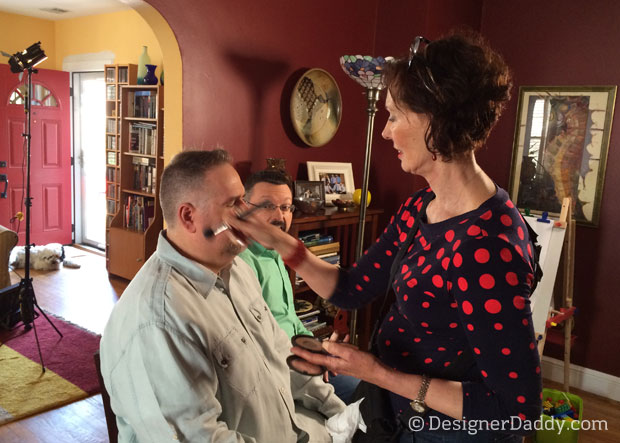 Papa tries to get me to laugh while getting my face made up. He forgets I’m an old pro. Or maybe I’m just asleep.
. 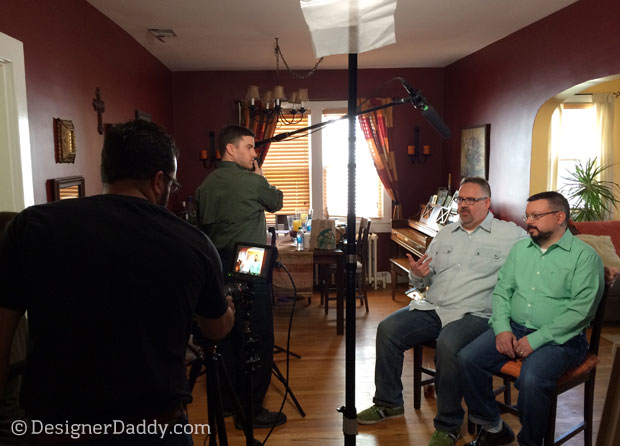 Waxing wise and witty about parenthood, TV, and talking tigers.
.

A huge thank you to PBS KIDS, the production team and our pal Daniel Tiger for giving us an experience we’ll never forget. Come back any time — we always have plenty of cupcakes!

*If you happen to see our promo on your local PBS station, please let me know! Shoot me an email at daddy (at) designerdaddy (dot) com.

†I always figured Lady Elaine was a lesbian — anyone else ever get that vibe?

Be sure to visit and like Designer Daddy on Facebook for more TV talk (and other fun stuff).