We’ve Got Your Back: Impressions of Dad 2.0 Summit

I’m ending my long weekend the way I began it — hanging out in an airport for 4+ hours. Different airports — Baltimore on Thursday, New Orleans on Sunday — but they both have the same unsettling mixture of being simultaneously busy, anxious and lonely. Or maybe that was just me. I’ll spare you the details of my traveling travails, but between the Polar Vortex and my own absentmindedness, it was a wonder I got anywhere I was trying to. And I’m not even on my plane home yet.

I had considered waiting until I’d had a chance to “decompress,” catch up on work, and generally give myself a chance to create something more brilliant and insightful. But I’m taking this time in limbo to journal my impressions of Dad 2.0 Summit while they’re still fresh.

As my arrival in New Orleans was 6 hours later than planned, I missed the conference’s opening party. I had to force myself not to imagine all the hugging and backslapping and toasting going on as my network of dad blogging pals reconnected or (as in many cases) met in person for the first time. My tireless and generous friend Don left said party to pick me up from the airport (it was his fourth trip of the day) and as I trudged wearily into the lobby of the hotel, several of the men I’d become closest to came bounding out of the bar to greet me with all that hugging and backslapping I’d not been dwelling on. As I made my way through the lobby and up to my room, I was met with cheers of “Brent!” from even more of my until-then virtual friends. I felt like a rock star. Or at least Norm. It was already shaping up to be a pretty stupendous time. 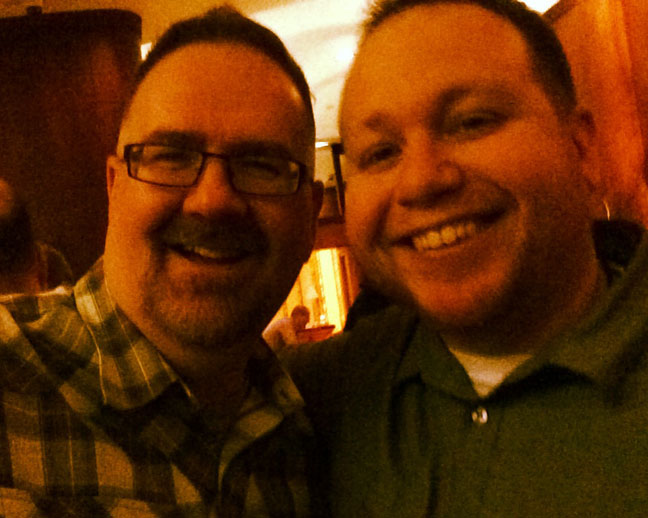 After a very late dinner of bourbon and beer (and more meeting and backslapping and hugging), I called it an early night.

The official part of the conference kicked off the next morning with a video montage meant to show how the reputation, visibility and portrayal of involved dads had improved over the last year. Mission accomplished. Yet it left two additional impressions. As image after image of friends and mentors flashed on the screen, mixed in with TV spots featuring loving, competent fathers, I was moved by the sense of support and community I felt. However I also found myself searching for that rarest of advertising creatures: gay dads. Maybe footage of a newly married couple and their children? Perhaps a soldier coming home to his husband and child? A print ad from an LGBT publication? A few seconds of Modern Family? Alas, not a one that I could see. Still some work to be done there…

The first keynote speaker was Jason Katims, writer and producer of TV shows Parenthood and Friday Night Lights, as well as the upcoming About A Boy. All inspired by films. All capturing in different ways the role of parents, and in particular of fathers. Katims sat with Jim Higley and answered a myriad of questions about his shows, his own life and his family. But the most moving moments were the show clips staggered throughout their conversation. Particularly powerful was a scene from Parenthood where the lead male character, sparked by an issue dealing with his autistic son, unloads a lifetime’s worth of repressed anger and resentment onto his own father. After taking the brunt of his son’s anger and feeling the sting of blame, the father pauses and responds with “I’ve got your back.” 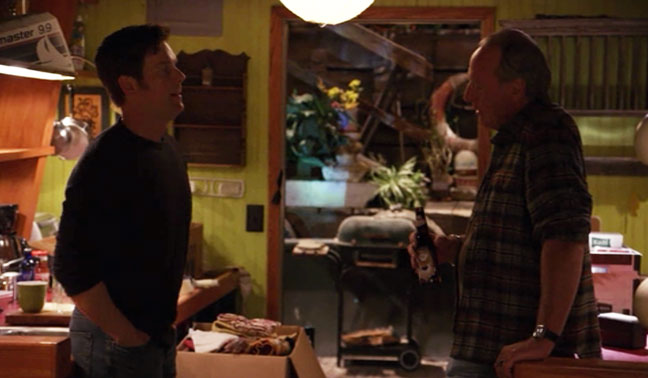 From season 2, episode 8 of Parenthood, “If This Boat Is Rockin.” Watch it on Netflix, scene is around the 21:30 mark.

You could feel a heaviness lift in the room as the lights came up. For myself and so many fathers I’ve met, frustration and anger can be such a prevalent burden, many of us having repressed it up to that point, only to have it brought to the surface through the stresses of being a dad.

Later that afternoon, Lorne Jaffe, a dad who struggles with chronic anxiety and depression, faced his fears of public speaking and shared a deeply moving post he’d written late last year. If you read nothing else, please watch the video to experience this man’s bravery, as well as the support shown him by all in attendance.
.

A FEW OTHER STANDOUT MOMENTS:

Whit Honea reading on behalf of TwoBusy, a retelling from a Bostonian of the marathon bombing and subsequent capture of the culprits. I dare you not to get choked up when he describes what it was like sharing this experience with his daughters.

I was honored to host a workshop on blog design, where I (hopefully) imparted a bit of my aesthetic wisdom and experience to several dozen wordsmiths — and a few other intimidatingly talented designers.

The sponsors. Okay, so maybe I’m brown-nosing a bit here. But you’ve got to hand it to the brands that showed up, as well as the Dad 2.0 organizers. You might expect a conference for dads to be brought to you by Budweiser, Hooters, Hummer and La-Z-Boy. Especially on Super Bowl weekend. But the ones that were there for the most part had a direct correlation to being a parent — not just a male stereotype. Dove Men+Care, Kraft Cheese, Lego, Little Remedies, Parents magazine. And my pals from Cottonelle who truly, literally, got our backs. 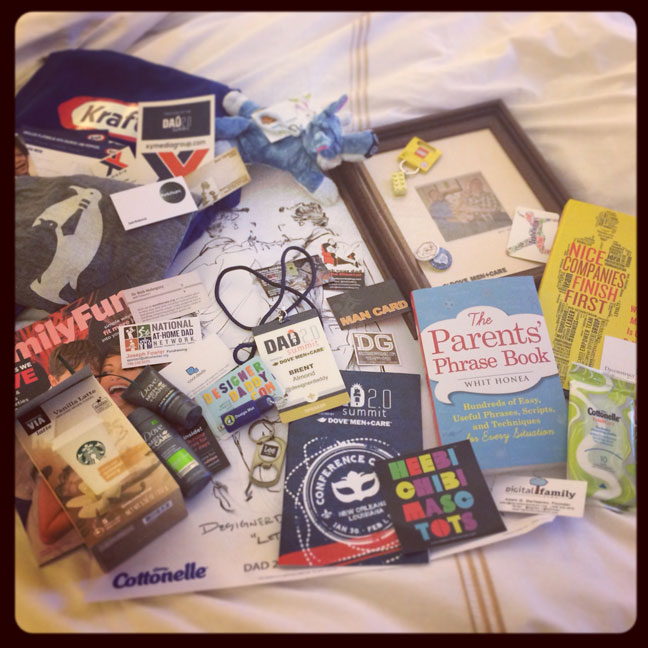 Posing with an albino python, courtesy of National Geographic’s Animal Jam and a rare moment of bravery. Papa and JJ both asked (independently) if it pooped on me. 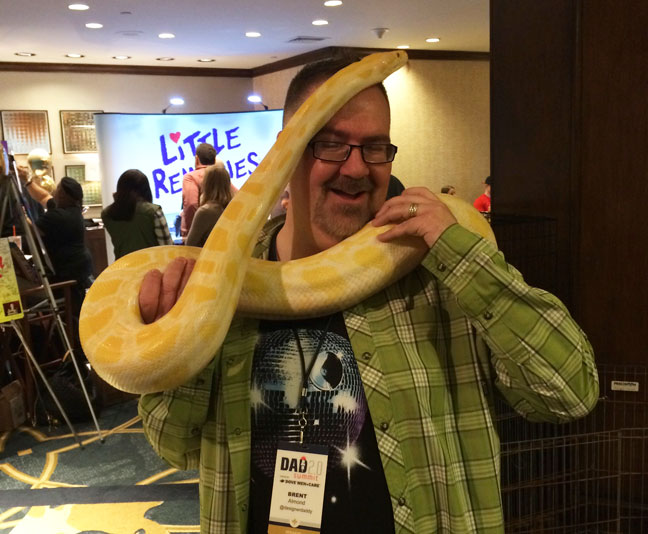 Attending a session on Marketing to Today’s Men, where panelists discussed the progress (and setbacks) companies have made in marketing to and about fathers. Particularly encouraging was the presence of Matt Tumminello, a marketer himself, who focuses on LGBT audiences and representation in advertising. It was refreshing to have him bring us gay dads into the conversation in a meaningful way.

Love from the ladies. Several prominent bloggers and those involved in the mom/female blogging community were there to show support, share their experience, and add perspective to the discussions. And they were all pretty damn fabulous.

As soon as the final session ended on Saturday, I started getting a faint sense of dread, knowing it was almost over and I’d have limited time with these folks. Our journey to dinner that evening took several twists & turns, ending at Mr. B’s. Our group was large and split into several different tables scattered throughout the bustling Saturday night crowd. I sat at the smallest table in the mix, just 4 of us — all of us dad bloggers, all of us with sons, but from all across the country (LA, Tampa, Boston, DC). As we drank and ate, and I made inappropriate overtures about my shrimp and grits, the conversation turned to Lorne and his triumphant reading the day before. As impressed as I was with this father’s huge accomplishment, I was equally impressed by all of the other dads who stepped in to support him, reassure him, to have his back, to talk him down afterwards when he had to leave the room in tears.

As I listened to the others talk and I pondered this community of ours, all of the moments of support, encouragement, empathy, wisdom and humor that I’d experienced over the last year through these men flooded my head. Overwhelmed, I started to interject myself into the conversation, with a marble-mouthed “I um…” but I could start to feel the well of memories rising up behind my eyes and in my voice. I paused, fearful of making a scene, and wondered if it was the Grey Goose talking. I held my tongue and kept tears in check and let the conversation carry on around and over my unfinished sentiment. Maybe I should have shared it then, but I wanted to let these three guys (as well as many others, both at Dad 2.0 and not) know how much they mean to me, not what a sloppy drunk I can be. So this is me telling you now.

At long last I’m on the plane home. Due to the aforementioned absentmindedness, I was forced to buy a first class ticket if I wanted to get home tonight. I can’t help but recall the last time I rode first class — a little over four years ago when we brought JJ back with us from Portland. We were weary from two weeks in a hotel, eager to get home and start this new adventure called fatherhood. We were huddled together in our little row, JJ safe and snug around Papa in his baby sling, me constantly hovering, poking my head in to see how our tiny bundle of boy was doing. The memory is the sweetest example of “we’ve got your back” I can muster. It’s going to make these next few hours that much longer.

Back home and back into the daily dad routine. On the drive to preschool this morning I asked JJ if he knew where I’d been the last few days. He said no, so I shared with him in the most basic sense what my time with all my “Daddy Friends” had been about. A few seconds of silence passed, and then his response:

“When I grow up, I want to be a daddy, and I can go to that meeting and learn how to be a better daddy.”

25 responses to “We’ve Got Your Back: Impressions of Dad 2.0 Summit”