This post has been a long time in the making, but I’m super stoked to finally introduce “My Two Daddies (Can Beat Up Your One)” — the single, the finished product, the labor of love. And oh yeah, the fundraiser…

Y’see, I had such a blast writing, performing and recording this — yet I know it’s not going Platinum or winning any Grammies (CMA award, maybe?). It’s pretty much a vanity project wrapped in a love letter to my son (with a smidge of me working through my insecurities as a father). But I figured while I’m sharing it with the universe, I’d try to raise some money for a good cause. And I’ve found no better cause that supports other families with Two Daddies (or Two Mommies) than Family Equality Council.

But before I prattle on too much about my own benevolence… THE SONG!

I originally wrote the lyrics as part of a copywriting workshop. I was attending a design conference in the Texas hill country, and our assignment was to write a country song using our own life as the subject. JJ was about 18 months old at the time, and already I was pondering worrying what trials he might face as the adopted son of two gay men. I pictured our little fella getting picked on by some mustachioed, homophobic toddler (I know, my imagination runneth over) and in response, JJ puffs out his chest, chubby fists on his be-daipered hips, the theme from The Good, the Bad and the Ugly playing in the background…

…and thus was born “My Two Daddies” — the mock battle cry of a picked-on kid who’s unequivocally proud of who he is, where he comes from, and that he’s dang lucky to have “the two best daddies that you’ve ever seen.” 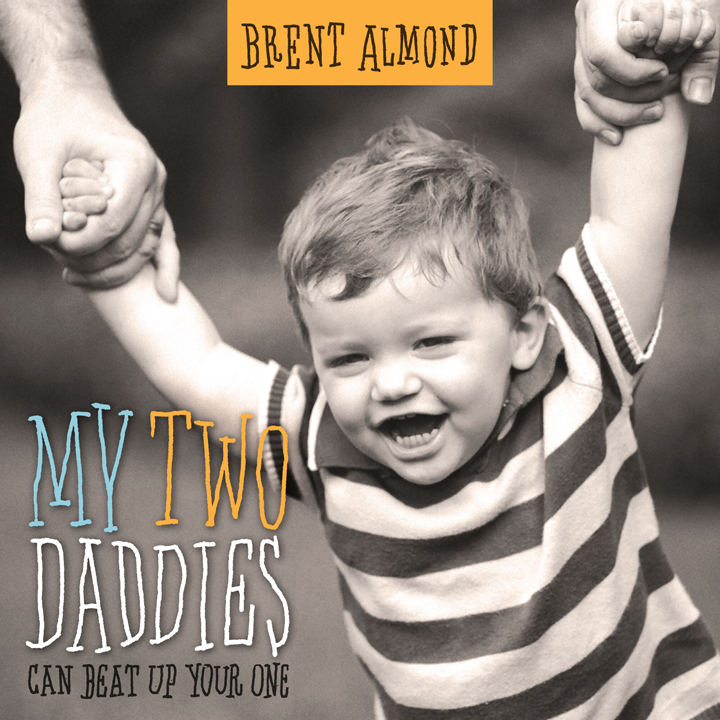 NOW ABOUT THAT FUNDRAISING BIT…
All the profits from song sales will go to Family Equality Council, so please mosey over to iTunes or Amazon and pony up your 99 cents. Our family (and others like ours) sure appreciates your contribution!

And if you’re feeling a might more generous, please consider making a donation directly to my fundraising page at Family Equality Council, where I’ll be tracking donations made from song sales as well as what’s contributed on the fundraising page. Since the month of June includes both Father’s Day and LGBT Pride celebrations (for many cities/states), my goal is to raise $500 by the end of the month.  But I’d be pleased as punch to raise and/or extend that…

“MY TWO DADDIES” – LIVE!
As a bonus, below is the video of me performing “My Two Daddies” (with co-songwriter Tom Nichols) at last year’s “No Talent Show,” part of the Gay Men’s Chorus of Washington’s annual retreat. I’m proud to say I won the “Judge’s Award” — which is kind of like Miss Congeniality, but not as conciliatory. 🙂

AND FINALLY, SOME 10 GALLON THANK YOUS & SHOUT-OUTS ARE IN ORDER:

Big Daddy hugs and kisses to JJ, my inspiration for all things muse-y and musical (and the cover model). You’re the light of my life and my superhero. I strive to always be yours.

And thank you to Papa (the other daddy), who brings home the bacon while I’m off playing artist, blogger and country singer. I appreciate all you do for us and for your unending patience with me. I love you and our family that we’ve made more than words can say.

Once more, for the cheap seats (please share the heck outta these links, y’all!):Bu